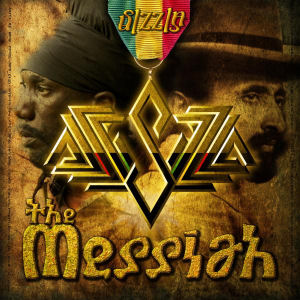 Miguel Collin has been recording as Sizzla Kalonji since 1995. He has been insanely prolific in the eighteen years since he put out his first album, releasing as many as five albums a year. “The Messiah” is his SEVENTIETH album. Granted, the quality of these releases is all over the map. I sampled his back catalogue on Spotify, and found that not all of what he’s released is prime AAA beef. Still, his hit rate is good enough that I was eager to give “The Messiah” a listen.

While some of Sizzla’s output seems like it was recorded in three hours using whatever riddims happened to be in the producer’s hard drive, “The Messiah” sounds like actual time and thought was put into it. The riddims are solid, the songs are well-recorded, and Sizzla sound full of fire and brimestone. He alternates between gruff chatting and an exaggerated falsetto. Like Snoop Dogg and Big Youth, Sizzla is an artist who started out rapping but decided to branch out into singing. He doesn’t have an amazing singing voice, but it certainly packs a lot of emotion.

What sets Sizzla apart from the legion of other dancehall artists is the passion in his chatting and singing. Sizzla has an aggressive style that is typical of “slack” artists, but his lyrics have nothing to do with sex and violence. Sizzla is firm adherent of the Bobo Shanti mansion of Rastafari, and his lyrics are full of religious messages. The Bobo Shanties believe that the black diaspora should be repatriated to Africa, and Sizzla recently took a trip to Africa. As a result, a lot of the lyrics on “The Messiah” are about that topic. “Africa is the center of attraction/Can’t take Babylon and them distraction,” he sings on “Center of Attraction.” There were a few points where the lyrics didn’t quite fit together, as if Sizzla knew what he wanted to say but couldn’t figure out how to put it into song form, but for the most part he manages to mix music and message without sacrificing either. Whether you are on board with his message is another story. A lot of “The Messiah” is concentrated on the wickedness of Babylon, aka Western society, aka white people. I’m not going to deny that people with white skin have done more than their share of terrible things, but I have issues with the idea that Western society is to blame for everything, and that repatriation will solve the problems that have been plaguing blacks for centuries. It’s an overly simplistic way of looking at things, and one that seems to leave blacks oddly powerless over their own fate and situation.

Whatever issues I might have with Sizzla’s politics (which may come down to having my feelings hurt at being called Babylon over and over again), he makes them sound good. The riddims on “The Messiah” range from roots reggae to thumping dancehall, and Sizzla’s delivery varies from fiery to sweet, often in the same track. There are a mix of digital and live instruments, and the drums almost always hit hard.  “Chant Dem Down,” one of the strongest songs on the album, is built around a dusty sample. Richard “Breadback” Bramwell recorded most of the riddims at his studio, and he manages to avoid the cheesier smooth jazz leanings that some reggae producers fall prey to. The roots songs sound just as rich and full as the dancehall tunes, and Breadback keeps the instrumentation tasteful. That hard-hitting roots-meets-dancehall sound is what makes Sizzla’s music a step above most of the other reggae and dancehall being produced today. He doesn’t have the R&B leanings of his fellow dancehall artists, and his reggae tracks aren’t as toothless as some of his contemporaries.

So long as Sizzla keeps things uptempo, he’s golden. It’s when things slow down that “The Messiah” can be shaky. The last third of the album has Sizzla singing more than chatting, and he doesn’t always pull it off. His voice is always on the verge of cracking and he has trouble hitting all of the notes. “One Life” and “Good Life” are both nice roots songs, but the positive messages of “Children Bless” and “May Di Powerz” fall apart because of Sizzla’s straining voice. He manages to finish strong, with the joyous “Better Come Out,” a song that sums up his views about repatriation:

“The Messiah” is one of the better reggae albums of the last few years. It balances a serious political and religious message with heavy riddims, and Sizzla’s unique chatting/singing style keeps it all moving forward. Even if you don’t believe that Haile Selassie is the Messiah, or have issues with black repatriation to Africa, “The Messiah” is still worth listening to. Sizzla proves that the seventeenth time is the charm.