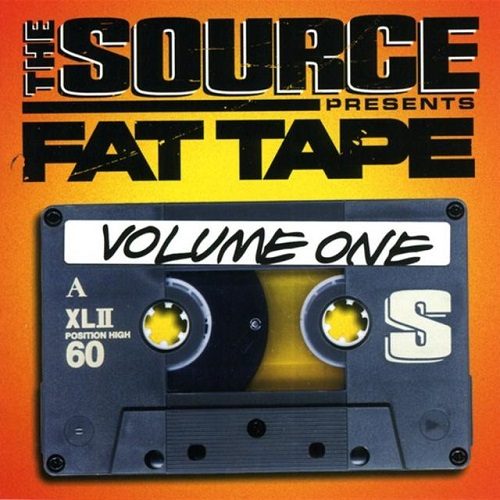 The first question anyone approaching this release should have, after determining that it indeed is being released in the summer of 2006, is: why? Making a strong case for the most irrelevant release ever, “FAT TAPE” has no good reason for existing. This isn’t to say there isn’t quality Hip Hop to be found here, it’s just amazing how extraneous and almost generic the whole thing seems. Filling us up with 20 tracks and coming in at over 79 minutes long, “FAT TAPE” seems desperate to impress us, despite being sponsored by a magazine that has lost all credibility and featuring a random grab bag of largely well-established artists, most of whom reached their creative and commercial peaks about a decade ago. Add it up and you get an occasionally enjoyable mixtape with some true bangers and a lot of mediocrity, which in the end will leave you more bewildered than satisfied. And the question will remain: why?

Starting things off, thankfully, is “The Format” featuring AZ, with help on the boards from DJ Premier (one of four tracks produced by Preemo on this mix). As usual, the Brooklynite kid brings lyrical heat, on par with anyone out now or in the last decade for that matter. The beat features a hypnotic synth loop that pulled me in immediately but seemed to wear out a little over the duration. On this and a few other tracks found here, the better half of Gangstarr seems to be on autopilot, relaying the same formula that he’s been putting down more or less for the past dozen years (crunching drum loop, haunting melody, scratched samples chorus), but mediocre Premier is still better than most producers best anyway. Following “The Format” is “The System,” a severely unremarkable â€˜ragga-rap’ hybrid, which is amazingly only one of three similar bastardizations found here. Seriously, there have been very few good reggae-rap collaboes, and these tracks (featuring Mobb Deep/Sizzla, Clipse/Vybz Kartel, and Capone/Mr.Vegas respectively) don’t add anything to an already forgettable sub-genre.

Continuing the record’s overall mediocrity are fine but forgettable tracks from well-respected veterans Scarface, M.O.P., The Liks, B.G. and Bone Thugs. In addition, Dead Prez once again comes with their characteristic hunger and knowledge with “Early,” but the track was already released on M-1’s solo “Confidential”. I suspect a lot more of the tracks found here are less than exclusive, making me wonder once again: what’s the point of putting together a completely random group of songs, many of which can be found elsewhere? Without many exclusives, “FAT TAPE” loses even more purpose. Not helping matters are the downright lazy efforts of formerly solid artists Mobb Deep, Xzibit and Tha Dogg Pound, who all sound well past their prime, much less their importance. Interestingly though, KRS and Marley Marl show up near the end for “Rising,” an enjoyable old school history lesson breaking down exactly how the 80s seminal beef went down (and, perhaps more importantly, how that battle never turned physically violent). The project is also saved from total disappointment by a few late gems, including two once-again Preemo headed bangers. First, Cormega reminisces vividly about his truly amazing passage through Hip Hop and life on “Dirty Game.” Then the last track showcases the hot-as-fire hunger of newcomer Termanology on “Watch How It Go Down” (the “bonus unsigned hype” track). His multi-syllabic and intricate rhyme structures recall early Nas and absolutely blow away most of the “FAT TAPE” veterans’ seemingly phoned-in verses. This track alone saves the album from total unessentialness.

In the end, “FAT TAPE” remains a mild enigma. Frankly, I can’t help but see it as anything other than a desperate attempt by the now completely ill-respected Source magazine to gain back some credibility, or at least support. It seems they have attempted to do this by taking a bunch of artists who were hottest when the magazine was (about 10 years ago), and basically pretending that is was 1996 again, before XXL and their own incompetence buried the once Bible-like Source. The results are, expectedly, mixed at best. Cop the joint if you find it in the bargain bin and you need a lil’ something to bang during car rides. Cop it if you are a huge Preemo fan. Otherwise, find a copy and rip a few tracks for the I-pod. No disrespect meant, but a quality Hip Hop mixtape (no matter how polished) deserves more premeditationâ€”step ya game up!