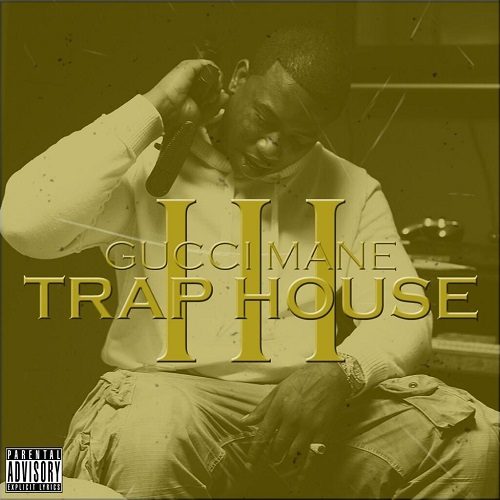 Here we are again. Radric Davis is back in the “Trap House.”

You expected lyricism? Then you don’t know Gucci. You expected intelligence? Then you don’t know Gucci. Occasionally he makes a catchy hit song thanks to knowing a few good producers, and I suppose by this point you’d have to call his mush-mouthed lazy vocal delivery a “unique style.” If you really want to stretch the truth you could even call it “charismatic,” though that implies he has energy. Most of the time his rap style is devoid of it. He raps like he’s drunk off cough syrup, smoked a whole bag, got frozen in a block of ice while all high and fucked up, was thawed out, and took a hit of laughing gas while still half frozen – and immediately went in the studio to record his vocals that way. He’s the epitome of the rap punchline “even your tongue’ll fuck around and leave your mouth.” The bad news is there’s a whole hour of this. The good news is he has guest stars.

A cameo by Wiz Khalifa results in the album’s best lyrical performance for “Nuthin On Ya.” Unfortunately other than Rick Ross the other guests don’t hold up – I guess it wasn’t good news after all. It’s a steep fall off from those two to 2 Chainz, and when you go from there to Chief Keef it’s a wrap. It’s not worth discussing cameos beyond that. As mentioned though Gucci Mane does have some nice beats here and there. Drumma Boy’s “Fuck With Me” is okay – it won’t go down as his best work but on this album it’s a highlight. Lex Luger’s heavily synthesized “Can’t Trust Her” is a good one, but the damn singing on it makes me wish it was an instrumental only. And credit where it’s due, both the Wiz Khalifa song and the single “Thirsty” are produced by C4 & DJ Spinz.

Unfortunately the lyrics kill this song. “Broke bitch, grew up in the hood, eating fish sticks/Hood bitch, thankin she the shit, but you ain’t bitch.” The song is absolutely the lowest common denominator of misogyny, to a point even a honest-to-God crack whore would slap him for how he talks about women. In Gucci’s world they can suck, fuck or earn him a buck, and if they can’t do any of the above they are “thirsty ass thirsty ass thirsty ass hoes” not worth shit. I wish there was some way to justify this as art, but that requires there to be artistic vision and a creative process. There is none for Gucci. You talk about how much dope you sell, how many drugs you do, and how many women you screw. It’s the same formula over and over again. He can literally sleepwalk his way through a “Trap House” album. He does here.