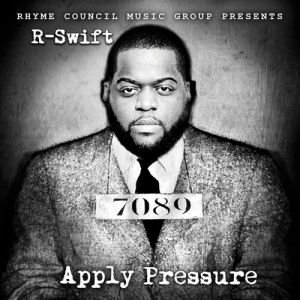 The biographical info for R-Swift is a little more scant than I like when doing a review. I know he’s from the Rhyme Council, but I don’t know who else is in the Council with him. I know he’s lived in both New York and Philadelphia but now resides in Atlanta, but I don’t know why he moved around so much. I can tell you the name of his manager and his booking agent, but I can’t tell you who he’s opened for or who he’s toured with. Details are important Swift – so please beef up your Facebook a bit. I tried going to your label’s website, but it’s a domain parked with Register.com, so the only thing I had was FB and I got that from your publicist.

Now that I’m through criticizing the minutiae, let’s get down to criticizing the music. For somebody who is seemingly as newborn to hip-hop as Kate and William’s baby, R-Swift has a polished yet gruff flow with a political message of empowerment and self-support. The press sheet doesn’t mention any of the producers on “Apply Pressure,” but they do a good job of playing the background to let the strength of Swift’s words come through. “Don’t Go” talks about being the child of an unwanted pregnancy with a whole lot of potential. I don’t know if it’s a personal story or just one he tells from the unborn baby’s perspective (again a little bio info would help) but it strikes a chord either way:

“We got doubts and it takes a lot to raise a child
So when I’m born I promise to make you proud
But until then I’m just daydreamin
Anticipatin the chance to be the change needed
Can’t wait to be a leader – of some sort
Maybe a doctor lawyer or teacher – a motivational speaker
who can reach the, whole world with his words
Like Martin, they can call me a dreamer
Opposite of what stereotypes said I would be
So there’s no limit in the potential that I could reach”

The word that comes to mind while listening to “Apply Pressure” is “thoughtful.” There’s a very deliberate and constructed approach to everything R-Swift says, meaning he put careful consideration not just into his breath control and his rhymes, but into the message those words would convey. I never heard “Part 1” but “Dear Mr. President, Part 2” makes me want to. “The people got concerns that need to be mentioned/in hopes that we can get to the issues that need your attention.” The piano sets his concerns off lovely. The soulful sound of “Raindrops” is also a winner, with the rain being the tears of hardship: “Some things never change, I’m always livin in the rain/The only time I feel alive is when I feel the pain.”

Though I lack the kind of information I need to get to know R-Swift better, “Apply Pressure” makes me WANT to know him better – and that’s more important. Many rappers being this serious this young in their career try too hard and wind up being preachy, but Swift has a natural flow that lies somewhere between Nas and CL Smooth that doesn’t sound forced in any way. He’s not about partying or taking Molly, but we need a few rappers who aren’t to keep a healthy balance in hip-hop music, and there are plenty of them and not enough R-Swifts. Guests like Sho Baraka and Butta P only accentuate what he’s doing as opposed to stealing his spotlight, so I’ve got to rate “Apply Pressure” an impressive start. Hopefully critics AND audiences alike will get to know this young man better over time. I suspect he’ll only get better going forward.