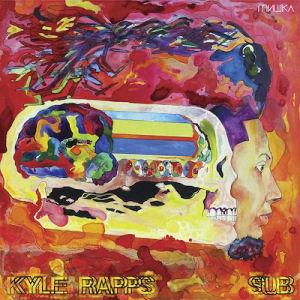 irst impressions of Kyle Rapps led listeners to believe he was on a mission to recapture the Boogie Down Productions sound of the late 1980’s and early 1990’s. Listening to “SUB” creates a new and entirely different impression. Rapps now sounds more like an avant garde experimental rapper from Los Angeles or Vancouver, even though he’s a New Jerseyite who moved to Harlem. Take “Bodies in the Trunk” for example:

Belief produces both this song and the entire album as a whole, and the closest comparison I can draw to the instrumental is if Pharrell decided that he was #Hyphy and rededicated his life to the sound – yet he still couldn’t shed his Neptunes roots. As for Rapps himself, he aptly describes his style as “underwater flow – yeah I’m on my gills.” The vocal pitch gets deep at times, but it’s not heavy and menacing – if we’re being honest he’s a bit on the nerdy tip.

Rapps is a little bit too nonchalant about his flow on this one, which is why “Get It In” featuring Action Bronson is a better choice to showcase his style. It’s also a more exciting beat from Belief, a punchy guitar rock affair with a Rick Rubin-esque breakdown shortly after the 90 second mark.

“I’ma give it to ’em, Belief give it to ’em
Keep the rhythm movin, makin vision music
My people livin stupid rich, movin bricks
Lunatics now in the pris’, doin bids
Who is this, wakin me, 2-6, talkin foolishness
Bumpin Ludacris in the crib – rumor is
They hit your dude for his Puma kicks
Put two in his ribs and he ain’t gon’ live
Just another black kid merked in the suburbs”

The suburbs are more than casually referenced throughout the album, which reflects both the album’s title and Rapps’ own upbringing. That may also account for the fact that while Rapps wants to be as grimy as his cohort Bronson, he doesn’t have that street slanguage tinge to his delivery. It would be far worse to fake it if he doesn’t have it, so the honestly stilted way he speaks is both endearing and occasionally a bit frustrating.

Rapps certainly has the respect of his peers, as he gets a cameo from Murs on electro-technical “Architecture” and Spaceman on the whistling and hi-hat heavy “Coco Puffs.” The thing that doesn’t seem to click is Belief’s backdrops. It’s not that he lacks technical excellence in any aspect of his construction – the vocals are well mixed, the layering is clean, the beats are on time and the songs are perfectly polished – it’s just that I don’t like the technological sound. It sounds like hip-hop for robots to do the robot to. Even a song like “Partycrasher” that mellows out the digital edges still feels too synthetic.

Individually there are elements of “SUB” I like and could enjoy on repeat plays. Collectively as a whole the 46 minutes seems to drag and gives me a serious case of the “ITIS” he references – on a song where he also purposefully raps like he’s drowsy as hell. I don’t want to fault either person here for being creative and experimental, but the risk you take when you make an album that way is that the audience isn’t always into the end result. Even as a free download I can’t highly recommend it.