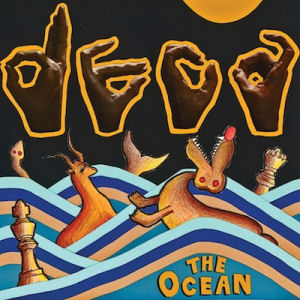 Deca is a decade down doing hip-hop, but if you haven’t heard the name of this Denver don don’t despair. At first his fame was subsumed by being part of larger crews – a band called Elemental and a duo called Prana among others. When Deca decided to strike out on his own, he became a victim of the vices of the music industry, though his descent through drug abuse became the fodder for an album called “The Hedonist.” Now that he’s on the rebound and prepared to reassert himself as an artist, he’s preparing a self-produced album called “The Ocean” for a September release.

The advance artwork may change before the album comes out, but at present it portrays a flood of biblical proportions sweeping animals and chess pieces (perhaps symbolically humans) out to sea. Deca may have felt he was drowning under the weight of addiction himself, but on “The Ocean” he seems unburdened and crystal clear in his delivery. Colorado feels like California when you listen to him for long enough – not in the gangster rap sense – but that Left Coast feeling of unbounded experimental flow and that crews like the Hieros and Project Blowed made famous. He’s the first man in a long time I’ve heard use “diaphanous” in a flow (meaning light, delicate and translucent) and does so naturally and effortlessly on “Angel Butter” without being pretentious.

Deca’s wordplay is a revelation. It’s like Saul Williams decided to be a rapper, or Aceyalone decided to be a poet. There’s a hint of madness to his genius, which Deca plays up by randomly inserting quotes from pop culture, completely bereft of any point of reference, played up in interludes like title track of “The Ocean” – “I’d be in a place, where it was like a maze to get out, but there were no walls. Like I was struggling to get out of a fucking, space.” The next quote sounds like GG Allin to me – but that may be my brain trying to compare Deca to other famous addicts. Either way the last quote could sum up the depths of Deca well: “I grabbed the knob on the door, and I opened up the door, and I realized – I was walking into my own mind.” The following song “Edenville” is pure stream-of-consciousness poetry, streaming off the page out of his mouth:

“New day, everything’s lovely, new highs
Visions of new beginnings and blue skies
Move West, crash cars, burn up all the black tar
Slow dance on glass shards – get your mind right!
Sinner man, pusher man, put the money in his hand, in advance
Paint a halo on top of a pentagram
Hell flames lash out like callina tongues
Sore eyes, beating drums, military drills, shrill war cries
Who could brave the Daedalus maze in record time?
Death-defying, I saw the light in the exit sign”

Hopefully the words seem as creatively sparked in print as they do listening to Deca flow, but if not take my word for it that he feels incredibly unbounded in his curiously not-quite-monotone flow. Even though his pitch doesn’t vary greatly, there are hidden depths, much like GangStarr records that featured Guru’s unique delivery and potent poetry. Deca’s records freely mock hip-hop conventions, as the chorus of “Big Time” repeatedly insists to “look at me – I’m doin’ thangs.” The song and video for “Breadcrumbs” mock fame, parodying the animated adventures of The Beatles, while presenting Deca as a spacefaring hero.

The unlimited creativity of Deca seems almost limited by the short constraints of his album (30 minutes that flies far too fast) but that makes “The Ocean” ironically diaphanous itself. Deca may be a deep dude, but the experience is fleeting and translucent, leaving you yearning for more of his unorthodox poetry. “One taste test’ll take you to the next level and apex/to cloud ten without having to spend several paychecks.” Those words on the finale “Sailboats and Trains” sum up the enjoyability of “The Ocean” perfectly.