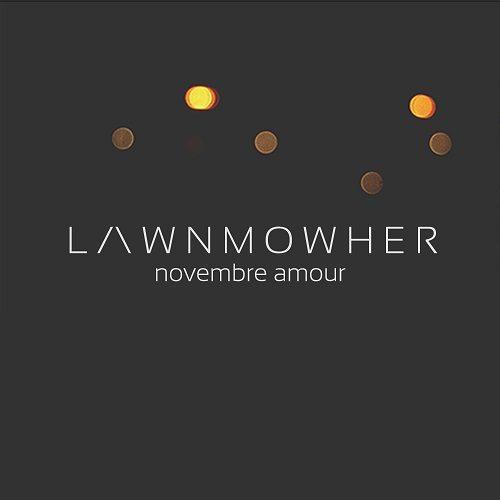 Lawnmowher is clearly a different kind of cat. While the selfie on his bio page is not actually him (someone in a Sailor Moon outfit wearing a horse’s head) he also hasn’t called to complain or change it. And who is this label creating bio photos right out of a Loiter Squad sketch? They’re called Hey WTF. It doesn’t appear that anybody on this imprint wants to be associated with doing the same old shit, and their name informs you right up front to expect the odd and bizarre. It’s a throwback to the 1990’s for me, when indie labels had names like Fondle ‘Em and Solesides, and you could expect dopeness each time they dropped something new.

I don’t know Hey WTF well enough yet to say they’ll get that kind of reputation, but “novembre amour” is a promising start. Lawnmowher is an instrumentalist, not an emcee, so “novembre amour” is what is more and more frequently called a “beat tape” these days. Unlike many producers putting out beat tapes though, Lawnmowher decided to (A.) release a single off his album and (B.) create a music video for it. “whispermeurname” is an odd collage of images – a girl dancing with a cow, people splashing water on their face overlaid by computer generates lines, rising flames, and disembodied heads. The video clips do change along with the beat though, so it’s hard to deny the hypnotic effect it ultimately generates.

Half of Lawnmowher’s tracks are under 180 seconds long, and half are over it. That just proves his flexibility – he can make a quick point or draw it out and suck you in. The short songs like “Heaven With U” (featuring Raul Flores) are just as intriguing and mysterio. Here it’s like somebody decided to make hip-hop with wind chimes and a scratchy turntable. I can’t imagine anybody rapping over it – and wouldn’t want anybody to either. This kind of music is best served by itself.

Longer efforts like “heygrl” and the title track are just as pleasing, and all purposefully in lowercase. That typography choice always leads me to believe an artist is being humble, but Lawnmowher doesn’t lowercase his name and definitely shouldn’t. Even though the tracks can be consumed individually, “novembre amour” does have an overarching theme – a secret romance which the composer was either inspired by or pines for (perhaps both). “repetitive kiss” suggests it was enjoyable, while “love me babeh” and “heygrl” seem more despairing – musically saying “don’t forget me” or “pay attention to me.” Fleeting affairs can be painful like that – one partner often not aware of the strong feelings of the other and uncomfortable when the subject of commitment comes up. Rejection can bring great pain, but great pain can also lead to great art. I sense that potential and promise from Lawnmowher, but I hope his next love won’t pull a Wyclef and be gone ’til “novembre.”