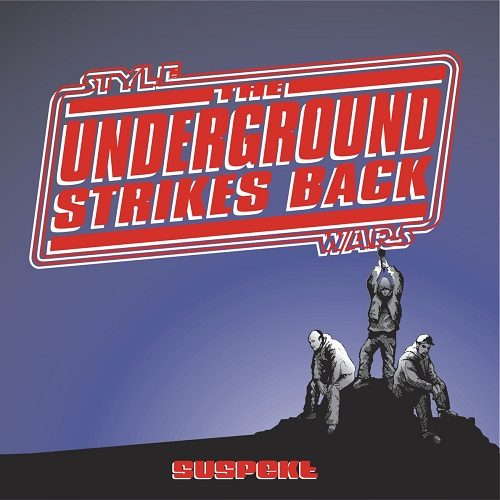 Suspekt :: The Underground Strikes Back

Suspekt were, and remain, one of the lesser known UK hip hop groups from the 90’s, which is unfortunate as the quality of their music was up there with the best the UK had to offer in those days. After a couple of earlier EP releases they finally brought us their debut LP in 1996, which, as a document of anti-commercial hip hop, was appropriately titled “The Underground Strikes Back”.

They waste no time with an introduction and get straight to business with the funky opener “Straight From the Heart”. Musically the track is driven by a relatively simple breakbeat, backed by a catchy bassline, has drops of lovely horns throughout and nice DJ work in the chorus. There’s nothing stellar about the song, it’s simply a very solid opener, but what really stands out here are the two MC’s. Firstly we hear the precise verbal diction of Blue Eyes (who I wrote about in my review of his “Straight From the UK” EP), and secondly we have the slightly more rough and aggressive sounding Lennie, who has a natural flow and strong mic presence; the two are quite different yet offset one another nicely, as has been the case with many of our favourite rap duos over the years. The theme of the opening track is basically an attack on commercialism, fakers and so on with lines like “you don’t get one ounce of respect, when I hear a UK rapper copy the USA, I press eject”. The ideal of non-commercialism and staying true permeates throughout the whole album, which fulfils the expectations set by the album’s title.

Next up we have the “Blow Up” remix, which is a reworked version of the opening track from their 1994 “Bury the Bullshit” EP. The original version of this track is one of my favourite Suspekt tracks of all time, and whilst this somewhat jazzed-up version isn’t quite up there with the rougher original, it’s still an awesome track. It starts out somewhat deceptively with a mellow introduction of jazz licks that would be at home on an A Tribe Called Quest album, but then suddenly it launches into frenetic scratching, followed by a bass heavy beat which then remains as the centrepiece of the song. Lennie really shines on the microphone here and I can’t get enough of his verses on the song (not that Blue Eyes lets the team down). Tasty DJ cutting drives the chorus here also.

Admittedly “The Lost City of Rap” track loses me somewhat and is my least favourite track on here (although it has grown on me over the years). Musically it’s slow and trippy, and has a sleepy tempo with some jazz touches here and there, all of which just drags on too much for me especially as it clocks in at over 5 minutes; take away the MC’s and it’s quite trip hop in nature, akin to what was heard on a Mo’ Wax or Ninja Tune instrumental album from the later 90’s. Props though for the ideas and lyrics behind the song, as the two MC’s cleverly bring us visuals of literally being caught up in a city of “sucker rappers” who need to be eliminated one by one via battling, and the Suspekt boys certainly attack the mics with some venom despite the blunted out, abstract feel of the music behind them.

Tracks such as “Born to Battle”, “Wasteland”, “R.A.P.E” and “Between the Lines” all similarly follow an addictive formula of prominent basslines, mid-tempo beats and jazzy injections interspersed throughout the tracks; albeit they each have different tempos giving them their own identities. Speaking of basslines, “Between the Lines” possesses a very prominent one that would have been right at home on House of Pain’s “Same As it Ever Was” LP, and Lennie’s faster flow here is also worth mentioning as being most enjoyable. Also impressive is “Born to Battle”, which sees our MC hosts flowing along with consummate ease over a nicely paced beat, and they pass the mic back and forth and back each other up in classic Run-D.M.C. style. However, the Blue Eyes solo track “Wasteland” does have me missing Lennie, not to mention it’s a bit too chilled and trippy like “The Lost City of Rap”.

“Dead Pool” is one of my favourites on this album. This is a pure head nodder and is essentially Lennie’s solo effort, with just a bit of background and chorus help from his extremely eloquent blue eyed cohort. Re-listening to this album for the sake of the review I still get a few “WOW!” moments from Len’s verses here; his skills impressed me then, and still do now. The song delivers another fantastic bassline with rough horn stabs and a lively beat that sit wonderfully alongside Len’s verbal attack. Just sheer funky, raw hip hop perfection on display here. Maybe it’s not the first thing you’d associate with UK hip hop, but there’s actually a strong hint towards Lord Finesse’s first LP here sound-wise.

“MC Pretend” delivers another slower jammy with piano keys sprinkled around behind nice drums and, as the title suggests, is yet another attack on emcees who fake and front. A most interesting aspect here is that the track features California’s Mystik Journeymen, but disappointingly the Living Legends founders do nothing more than say a few words on the track. However, the simple fact that two lesser known groups from the UK and the USA combined in some way on record during those years was quite significant, being such a rarity, and perhaps surprisingly, collaborations “Across the Pond” still aren’t so common these days. I’m not sure what the catalyst behind the collaboration was (Mystik Journeymen may have been touring the UK at the time?) but nuff respect to both groups for making it happen, although the Mystik dudes should have dropped a verse or two.

“On the Fast Tip” is not actually the hyper-speed rhyme fest that the name suggests; in fact it’s the first of two instrumental DJ tracks on this album, courtesy of DJ Format (who, via some solo albums, gained some notoriety in later years after Suspekt disbanded). I probably can’t say too much about this one, being par for the course as far as DJ tracks in those days went, but one thing worth noting is the tempo change mid song where Format does in fact pick up the pace “on the fast tip” and then launches into a cutting frenzy. The second DJ track “Check the Format” comes later in the album but I like the earlier DJ track better; this one does get rather tiresome with someone seemingly playing some freestyle keyboard notes for the last two minutes of it which doesn’t lend itself to much replay value, and it takes the track back into the trip hop territory that seems to drag the album down on a couple occasions. DJ Format not only provides all cuts on the album, he also produces the majority of the tracks (in conjunction with DJ Grade 1), with DJ Prime Suspect earning a couple production credits also i.e. DJ’s being producers was common in those days.

However, if I wanted replay value, the brilliant title track, which closes the album, has given me 17 years of repeated listening pleasure and I’m yet to grow tired of it. Although this album came out at very much the tail end of the UK hardcore/”Britcore” era, this track would’ve been right at home on a Gunshot LP or a First Frontal Assault 12″ from the early 90’s (i.e. Gunshot and First Frontal Assault were UK groups that were the hardest of the hard). It brings absolutely everything to the table; a hard hitting and rapid drum track, air raid sirens giving it a gloriously urgent and dramatic feel, two talented MC’s ripping into it, and not to mention it has an addictive effect where nimble piano keys run off and on throughout the track behind the verses and the chorus. Lennie again blows me away here, a real feature is the way he integrates Star Wars themes into a scathing diss on the wack MC’s of the world. His performance is absolutely brilliant and I rate his verses on this track as the best I’ve ever heard from him (at this point I have to admit to preferring Lennie over Blue Eyes, as Blue Eyes tends to stick to the same almost spoken word tempo regardless of what the music is doing, whereas Lennie has a more adaptable style). Honestly this is one of my favourite hip hop songs of all time; I’m not exaggerating in saying that it must be in my top 10 to 20 most listened to rap songs ever. If you want to know why this reviewer loves hip hop, here is your answer:

This is really an outstanding album with only a couple of very minor negative points; the chilled material is at odds with the more energetic feel of the album, and a couple tracks run out of steam due to their length. The album is very creative yet maintains an uncompromisingly “real” feel, true to its “Jedi Knights of underground hip hop battling the Dark Side of commercialism” concept, and overall it can’t really be compared with any other album of its time – UK or US. Similarly, the two MC’s stand alone as they are hard to liken to anybody else that grabbed a mic before or since. Sure, the album does have influences from the harder UK hip hop released five years before it, and also has touches of the jazzier element of 90’s USA East Coast sounds within the production, but the influences are subtle enough that they don’t override a distinctive Suspekt sound. Suspekt actually made an impressive comeback in 2007 with the “Back from the Dead” EP, followed that up with the “Dead Men Walking” album in 2008, and also released the “Verse and Chapter” EP in 2012. For those more recent releases Blue Eyes was replaced by early 90’s Suspekt crew member Pride on the mic, but nothing was lost in quality, and Suspekt continue to be a fine example of UK hip hop to this day.