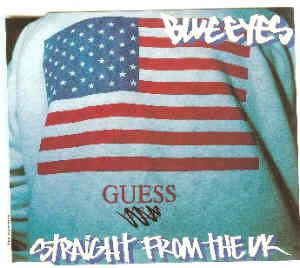 Blue Eyes :: Straight from the UK

“Straight from the UK” is a 1994 EP release from one time Suspekt crew member Blue Eyes. He was one of many UK rappers that didn’t seem to get their deserved props (nor did the crew he originated from), which is a shame as he was definitely charismatic, entertaining and rather skilled on the microphone.

The title track opens the EP and it might as well be the anthem of golden era UK hip hop as it’s one of the most pro UK hip hop tracks you’re ever likely to hear; it really sums up the sentiments of many rappers in the UK scene at the time who were fed up with the bullshit coming from their peers. The themes are about creating genuine UK hip hop and supporting it, being true to who you are and where you are from, and eliminating the pretentiousness of acting American and being fake gangstas. Musically it’s a wonderfully rugged track with heavy drums and some beautifully screechy horns which wail throughout the track. Overall it sits close to the harder edged, up-tempo Bomb Squad (i.e. Public Enemy producers) like “Britcore” sounds which dominated the UK scene during the late 80’s/early 90’s (although 1994 was very much at the tail end of that era), but there’s also a significant dose of the classic D.I.T.C. sounds of Show and A.G., Diamond D and co. with the way the horns are used. DJ Prime Suspect (also from the Suspekt crew) produces all the tracks here aside from “Soul Tip”, and is an actual DJ also and thus provides some nice turntable work on this song. A sample from UK legend Blade provides a most appropriate chorus. It’s simply one of the great UK tracks of the era, musically and lyrically:

The lyrics leave little doubt as to the stance of Blue Eyes; he’s pissed off at the fakers â€“ and rightly so. The issue of fake American accents was a big issue back in those days, both in UK and Australian hip hop, and it was something that certainly worked up those opposed to it, as evidenced by this track from Blue Eyes.

“That’s Not Freestyle” is another attack on the fraudulent, and this time our host is calling out MC’s who are pretenders on the freestyle tip:

“True to the game, freestyle’s the name
The name is the aim, the aim is the same
That’s the name, but so many miss the point
Rehearsing the verse in a soundcheck
Stand on stage and start your freestylin’
While in the crowd I hear you speak
The very same lyrics I heard you speak last week, what a cheek
Coz that’s not freestyle …”

Historically this has always been a big issue in hip hop, regardless of the country, so Blue Eyes devoting an entire track to the subject was as relevant then as it would be now. Horns are very much at the forefront of this track and they sit over a mid-tempo head nodding beat, and underneath the track we have a very prominent and addictive bassline. It’s a great track but runs a bit too long, as for a couple more minutes after the rhymes have finished we have Blue Eyes nattering on half audibly and laughing over the instrumental, all of which becomes annoying and lessens the appeal of the song somewhat.

“Soul Tip” carries on well from the first track, again possessing similar production values with horns and rough, noisy beats. This track is actually an older track, produced by DJ Mink, which ended up on this release after being released originally as a 12″ three years prior to the EP. The most distinct feature is once again a lovely hard and prominent bassline (one which you’d surely recognise if you were around hip hop in those days). Blue Eyes takes shots at wack and weak MC’s and cuts them down with the precision in his eloquent voice, a voice which really stands out due to its clarity. For all those people that seem to struggle with not being able to understand non-American voices on the mic, the almost perfect and rather deliberate diction of Blue Eyes is probably going to be very pleasing to your ears (actually, it just occurred to me after all these years that he sounds somewhat like the above mentioned Blade, but there’s enough difference to set them apart):

There’s not too much to say about the 2nd half of the EP. There’s an accapella of “That’s Not Freestyle”, and the instrumental for the title track. Last and definitely least there is also a rather silly track called “Do the Frank” which is Blue Eyes and some of his buddies laughing, talking shit and carrying on over a goofy circus sounding instrumental. I’ve never liked nonsensical, comedy interlude things like this on hip hop releases and I imagine they’d only be enjoyed by those who made them; there is definitely no replay value in something like this. No thanks to Prince Paul or whoever actually started the idea of skits in hip hop!

An interesting little point worth mentioning is that the EP was released on the German Buback record label, which was home to German rap groups such as Absolute Beginner and Readykill (amongst others). What was a UK rapper doing on a German label? Long story short, the Germans had a strong interest in UK hip hop back in those days, and it could even be argued that many of the UK acts were given more love in Germany than they were on their own shores. The label itself was (and to my knowledge still is) based in Hamburg, a city that had its own thriving underground hip hop scene in the 90’s, and some artists in that scene were clearly influenced by the hardcore UK hip hop style. There were actually quite a few UK releases on German labels back then also (for example, the Move label put out some music by Gunshot, Killa Instinct and Suspekt). The world of hip hop and the international connections went far deeper than many people these days realise.

So there you have it, it’s very short but the main three tracks are very sweet (the other tracks sort of don’t really count anyway as they are more supplemental in nature). Despite its brevity, I feel this EP is quite significant as a little glimpse into the mindset and sounds that dominated the UK underground hip hop scene in those days. It’s probably relevant to write about it in 2013 for another reason also; despite its age and despite the usual rarity of similar releases from the era, the O.G. release (CD and Vinyl) is STILL available nowadays, and can be found online rather cheaply.