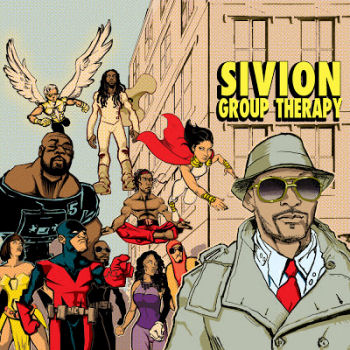 Packing an album with guest features only really works when you’re a producer looking to showcase your skills for a variety of artists. In hip hop terms, it gives a group of emcees the opportunity to catch wreck. As an emcee however, Sivion’s decision to be accompanied on 12 out of 16 songs is a strange one, especially as Sivion feels like a natural rapper. It’s not as if Sivion is operating on the level of French Montana, hiring guests to hide his own shortcomings, but it still baffles me why a rapper trying to make a name for themselves would milk every last contact in their phonebook.

Despite these reservations, “Group Therapy” isn’t as disjointed as you’d think, with a good-natured atmosphere running throughout giving each track a likable charm. Although some clichÃ©s rear their ugly heads (“Real Talk” is another rap song claiming authenticity), “Group Therapy” sees Sivion provide hip hop at its most pleasant. There is minimal swearing, cleanly produced instrumentals and an overall feel of positivity underlying much of the content here. Sivion isn’t a preachy rapper though, but he does lack a certain X-factor with songs like “The Best” devoid of identity and “Free Your Soul” proving Sivion’s presence is easily outmatched by unknowns like Sojourn & Ahred Strenge Indeed.

“One Two” is as good as anything you’ll hear on the radio, a real stonker of a hook from Heather James raises the bar and really surprised me with its appearance on such an overlooked album. Looking at the production credits proves just why some songs sound as refined as they do: Symbolic 1 (Jay-Z, Beyonce) provides “The Best”, The Are (LL Cool J, Nicki Minaj) goes hard on “Ladies and Gentleman” but PICNICTYME’s brought the bears back to the studio with him on “Watch Out”, a certified face stomper. Production is certainly a strong point of “Group Therapy”, but it more often than not rarely excels past being “good”. Songs such as “Honey Dew” showcase Sivion’s talents as his honest, affable persona fits in snugly with Common, Mos Def and Pharoahe Monch on the scratched hook, but most importantly on the snappy instrumental (courtesy of Theory Hazit). Truth be told, there aren’t many moments where “Group Therapy” hits that desired â€˜dopeness’ mark all hip hop must pass through, regardless of content or originality. “Let’s Grow” is a pleasant diversion (if you’re into an R&B collaboration over a Dilla-style beat) and “Dub Season” is a worthwhile posse cut, but adjectives rarely stray further than “pleasant” and “worthwhile”.

Sivion is undeniably a voice to watch out for, purely because he is capable of making consistently good music. However, with “Group Therapy” firing emcees and producers (as well as DJs) from all directions, you have to wonder whether if there were less artists at this session, the outcome would be more focused. Next time I’d like to hear more Sivion and less of the others, because judging by “Group Therapy” he doesn’t need their advice.