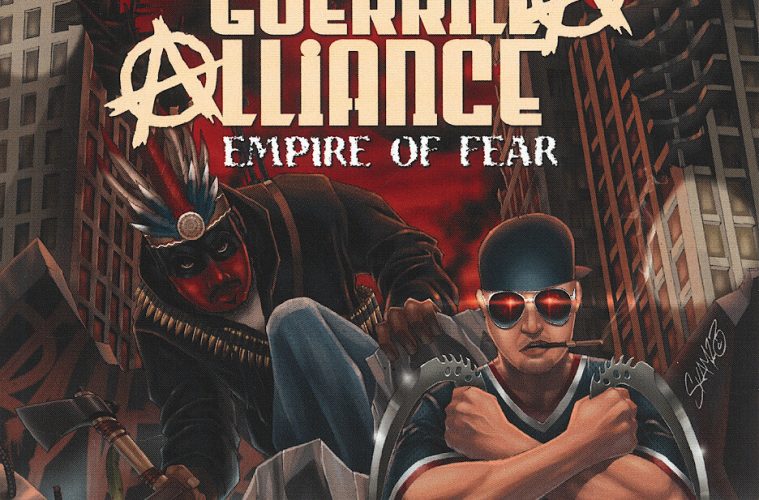 This is likely to be my last Guerrilla Alliance or Planet X Records review for some time. I’ve been diligently trying to space them out to not overwhelm the reader, but to be honest I’ve also done it to not overwhelm ME. There are some intriguing things about the Planet X crew, including their overarching conspiracy theory narrative (reminiscent of Wu-Tang affiliates like Sunz of Man and Black Market Militia) and apocalyptic musical sound (reminiscent of Jedi Mind Tricks). This is tempered by my feelings about Vega X, whose flow I must unapologetically describe as odious, if indeed “flow” is even the right word. He inhales a lungful of oxygen and screams his lyrics at the microphone in gulps, completely oblivious of the instrumental or its tempo. He’s a charismatic figure given his unorthodox style and gravel delivery, but if screaming polemics at a microphone alone could make you a rapper, then we’d have to consider Bill O’Reilly and Rush Limbaugh rap stars too.

“This is the Revelation sequel!! The final face of Megiddo!!!
The tenth plagues of Egypt!! My pen slice the demons!!!
Decay eats away at your facial features!!
Feel the same pain as Jesus!!
During the crucifixion murdering truth is VICIOUS!
Final conflict; rhymes sever your spinal columns!
Surrounded by sheeple, mindless golems!
Clever concepts, seven prophets!
The last battle of humans; lost passage of Judas!!
Savage or brutal! In the shadow of Nibiru!!” – “Megiddo”

“Empire of Fear” benefits from doing its best to keep Vega X mixed into the presentation instead of totally dominating it, thanks to an abundance of guest stars who come along for the ride. These are names underground rap fans will be well familiar with. El*A*Kwents drops in for “Ghost in the Machine” and Ronin, Block McCloud on “Eye 4 An Eye,” Lone Ninja on “Alliance of Peril” and Chief Kamachi on “Predatory Spiritualism” just to name a few. You’ll also find some less familiar names like High Dro & Tehutimos on songs like “Scimitar,” but I do not exaggerate when I say any time spent with someone other than X rapping is time well spent. R.I.P. Vee Eye, who can be heard on “El Divino Rito de Reyes.”

Thanks to Vega’s partner Macabean the Rebel and a slew of quality guests “Empire of Fear” is the strongest Planet X Records album I’ve reviewed to date, which makes it a fitting note to sign off on. The only drawback aside from Vega’s flow is the sheer length, as 80 straight minutes of conspiracy theory rap with Vega’s sporadic screaming is a lot to consume, although you are rewarded near the end when Canibus drops in for “Ordo Ab Chao.” Given their all-consuming belief in global Illuminati schemes, anything which critiques them may just be taken as part and parcel of the conspiracy they’re fighting. It would be nice to be part of something that grand given I barely have the paychecks to string together to replace a car battery. If poverty is the purest form of honesty, let it be said that Vega X has a lot of intriguing things to say, I’m just not necessarily a fan of the way in which they’re said. He works with the right people and is obviously much better connected in the industry than I am given the guest list, so I only hope someday he’ll settle down and stop screaming his rhymes.