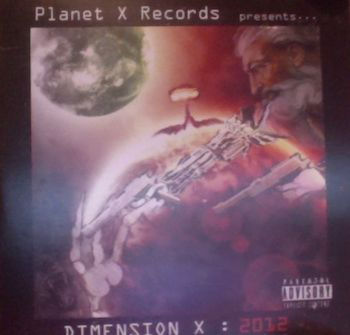 Various Artists :: Dimension X: 2012 (A Compilation of the PXR Praetors)

As a matter of habit I check theRapReviews archives before starting any new write-up to make sure it’s not something we’ve already covered. In doing so I discovered only one other review to ever reference “Planet X,” that being a MF DOOM live album released by Nature Sounds back in 2005. I’m surprised it hasn’t come up more often given how many rap artists are fascinated by both science and science fiction. Ironically it was only a year after DOOM’s album was released that the IAU reclassified Pluto as not being a planet, which makes the very concept of a “Planet X” problematic at best. Pluto was the 9th planet, and if a 10th even existed, it would have to be beyond Pluto’s orbit. Now that ice bodies like Pluto are no longer considered planetary, our solar system is deadlocked at 8 planets – never to reach 9 let alone 10.

Nevertheless much like Pluto will remain in the mindset of children who grew up being taught “the nine planets orbiting our sun,” so too will the idea of 10th planet remain in pop culture to some degree, whether called Planet X, Nibiru or even Mondas. MF DOOM and Planet X Records don’t have anything in common other than their fascination with this fictional heavenly body, though the artwork of this compilation’s cover depicts a sci-fi scenario that DOOM’s namesake Victor von Doom could certainly relate to. Some unnamed and apparently omnipotent being (bearing similarity to Euro-Christian depictions of God) is pointing guns at a wolven creature – one in a normal hand and one appearing to extend from a cybernetic arm. In the background a nuclear explosion erupts on an unnamed body, possibly Planet X, with what could be an orbiting moon in the background. It’s vaguely apocalyptic and certainly distinctive, though it also feels a bit Photoshop. Songs like “Sky Erasers” suggest overarching New World Order fears.

“Religions become plagiarized, people become persecuted
Reptiles run the world, so the world is in ruins
One side believes the fact that the other side becomes sheep
You want my opinion? One side thinks as the other one sleeps
They control it all, whether you know it or not
Illuminati factions comin in flocks
Yeah the all-seeing eye pinpoints your every move
Revolutionary voice forced to drop these jewels”

I have no problem with fantastical conspiracy fantasies or combating the Illuminati in rap – it has formed the backdrop of dozens of enjoyable albums from Mobb Deep to Killarmy. However some of the vitriol found on “Hunter’s Moon” seemed excessive: “We shoot agents/execute Masons on Nazi moon bases/the crew’s dangerous/macking heaven’s assassin/back again check the brethren erratic/we’ll bury you faggots!!” What does an unnecessary homophobic slur have to do with fighting either the real or perceived threat of a New World Order? Trying to apply reasonable attitudes toward conspiracy theories though is probably a mistake though. Much of the world’s anti-semitism comes from a conspiracy belief that a small group of Jewish men control banking and finance for the entire globe. Any time you try to challenge the hatred in a conspiracy theory, you’re quickly hit with “Of course you’d defend them – you’re part of the conspiracy too.” True believers in conspiracy cling to them as ardently as the devoutly religious cling to God.

The songs of “Dimension X: 2012” and the various rappers of the clique – Schizo the Maddcapp, Stranga the Great, Sleaze the God and Vega (the) X among others reflect a continual sense of paranoia in both their verses and song titles like “Spiritual Warfare” and “End of Dayz.” They seem ready for war even when not afraid of its arrival with songs like “Violence” and “Machine Gun Metaphors,” the latter featuring lines like “I don’t put a value on human life/you see him as a rapper but I see him as a sacrifice.” Hmmm. I have less of a problem with that than with “City Pictures Part 1,” which recycles an already well worn hip-hop piano break (think Heavy D’s “Yes Y’all” among others) and adds little to it.

There are some unique instrumentals, such as Zeps classically inspired instruments “Triforce,” and the hard pounding “Dogs of War” by Macabean the Rebel. The quality of the flow found after the intro on the latter is problematic though. It’s not so much rapped as it is yelled, 3-5 words at a time, with a vague attempt to rhyme each stanza together. “Turn your bones to ashes/broken fragments of the goons of fascists/who control the masses/below the hall where the souls are captured.” It’s the widely variable quality of “Dimension X: 2012” which causes me to give it a neutral rating. Some of the emcees and beats here are not quite ready for primetime, and the songs like “Spiritual Warfare” where everything comes together are too few and far between. There’s a lot of talent individually, but a complete lack of focus overall other the general overriding sense of doom. They should worry less about the end of the world and more about making the best use of the resources at their fingertips before it comes.