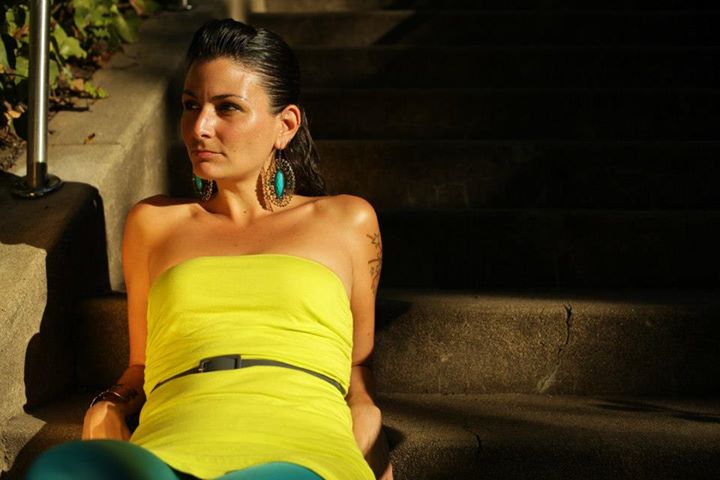 If you’re a hip-hop fan who longs for the days when acts like Groove Theory, and Digable Planets, ruled the airwaves, Dana Salzman is an artist that’s right up your alley. A singer and emcee with an extensive background in jazz, Salzman slows things down, and brings hip-hop back to the jazzy, groove oriented era, when listeners could put on an album, kick back, relax, and spend some time with a significant other.

Salzman, who hails from the Bay Area, recently released her third album, titled Deep Down, and RapReviews caught up with her to find out more about her music, and how love, sex, pain, and God are all involved.

Adam Bernard: You have a jazz background. When did you first notice hip-hop influencing you?

AB: So you quickly incorporated it into your music at that point, even at the age of 14?

DS: Well, at the age of 14 I was definitely studying music. I didn’t start playing gigs until I was about 15, or 16. I started making my own music when I was 18, and I think it automatically had a hip-hop influence in it, along with jazz, and R&B, and everything that I like.

AB: You went to school in New York City. How’d you end up in the Bay?

DS: I’m from The Bay. I went to New York for college, and I stayed out there for ten years and change, and then I came back to The Bay because it’s just more my speed out here.

AB: I was gonna ask, because your music slows things down a bit, do you think you could have harnessed that emotion as effectively in a city like New York?

DS: Everyone’s physiology does differently in different places, and for me, personally, and my overall spirit, being in The Bay is much more conducive to me, and getting my music on point to how I really really want it. I made a lot of music in New York, and it was good, but yeah, that’s a rat race, everybody’s in small cramped quarters, and always constantly climbing these achievement ladders, and it’s just not my thing.

AB: On your latest album, Deep Down, you work with a few hip-hop artists, including Rappin’ 4-Tay. When did you start linking up with emcees, and how did those relationships grow?

DS: I started linking up with emcees since I was about 18 and started having a band. It’s always been a beautiful, and natural progression. I rap, too. I like to lay down really soulful beats, and instrumentals, for people to vibe to, and I love good rappers, and I also like reggae/dancehall emcees. I like to mix things, so I like to put a reggae/dancehall emcee over an R&B beat, or put like a gangster rapper over a smoothed out jazzy beat. It’s just grown because we’re all evolving as people, and as we evolve, and go through experiences, it makes our music deeper, and the lyrics deeper. Everything gets deeper, and better, and more fine tuned as time goes on. Rappin’ 4-Tay is just one example of someone who I think gets better with time.

AB: I read an interview where you said love, sex, and pain all play a role in your music. Can you give me an example of each from Deep Down?

DS: Sure, and God was in there, too, but they edited it out for whatever reason.

DS: I’ll start with God. I know everyone’s idea of God is different. I use it loosely, but to me that’s like the driving force inside of us, of everybody. It’s the thing that’s looking out of our eyes, and thing that’s making us think our thoughts, and do our actions, and it’s what is coming through us when we’re playing music, or talking. It’s like every single action that you do in life is just God coming through you. That’s what I know. Then about love, sex, and pain… unfortunately, those three things seem to go hand in hand. I’m trying to find another way that doesn’t involve so much pain, but it seems like when you love somebody really deeply then you’re just as open to getting hurt that deeply by that person. Some of my best music has come from being really hurt, and not only in romantic, love, kind of ways, but grief.

Everybody can relate to pain. Everyone has felt pain. Sometimes, at my most lowest points, where I’m just feeling so much pain that it’s unbearable, I find that if I literally talk to God in my head then it helps a lot. You can actually have a little bit of a conversation, and that’s the only thing that’s helped me get through some of the really hard moments that I’ve had in my life, and all that translates into my music because, for some reason, when that process happens it makes these musical ideas come to me, and it helps them come out.

And then sex, it’s such a beautiful thing. Everyone’s songs are about sex, almost. It’s awesome. That’s a pretty amazing thing, especially because I don’t separate love and sex. I don’t do the casual thing, at least at this point in my life, so it’s the deepest expression of love. I think that’s why a lot of songs are written about it because it’s really hard to put certain things into words, but when you combine it with chords, and harmonies, and beats, and intonations, it can sort of capture some of the nuances that words can’t.

AB: Do you hope people fall in love and have sex to this album?

DS: I hope people fall in love, yes, to the album. Most of my albums are good boot knockin music. That’s what I’ve been told. Some (songs) are kind of deep and sad, but a lot of the songs are kind of sensual, and good for that kind of energy.

AB: Have you had reports back from people telling you how well it’s worked?

DS: Oh yes. I have. The song “Roller Coaster,” one time this girl, I just put on “Roller Coaster,” this song that’s on the record, and I know she was drunk, but all of a sudden the spirit hit her and she started dancing so sensual, and she was like getting on the floor, and before my own very eyes I saw how this song made her feel. It was kind of weirding me out, but from other records, too, I’ve definitely heard reports. Couples have told me, “We like to put this on, it gets us in the mood.” Stuff like that.

AB: You have a few live tracks on Deep Down. Why did you want to include live performances on the album?

DS: Because when you’re actually in a room with other musicians, vibing in the moment, it’s a totally different vibe. There’s real people, and real energy bouncing off of each other, and part of my vision, and master plan that’s coming together already, is having highly arranged arrangements, like arranging hip-hop, or R&B, kind of similar to Earth, Wind & Fire, or Roy Ayers, but also with hip-hop and reggae flavor in there. I like to mix it up. I love just being alone in the studio, and doing my own thing, but being able to give parts to people to play, and have my creative vision come to life with real people, is pretty amazing. Plus, more than one mind, and heart, can make things so much better.

AB: Have you had a moment yet where you’ve said, “Wow, I’m really making it.”

DS: {laughs} I’ve had a lot of frustrating, opposite type of moments, but honestly, for a while I’ve felt, to use the words “making it,” I’ve felt like I’ve quote-unquote “made it” for a while because the way I make a living is through music. I also teach music. I actually like what I do. People are only cut out to do certain things. I’m definitely not cut out to sit behind a computer, unless it’s making tracks. I’m always behind a piano, that’s how I make my money, either playing it, singing along with it, making beats for somebody, or teaching someone, and I’m happy. I don’t dread my life. To me “making it” is not necessarily about climbing some ladder and getting to the top, it’s like right now, how is your day, you know what I mean?

AB: Yes. I totally understand where you’re coming from. Finally, tell me about the tattoo on your left arm. I can’t see all of it in the pictures, but from what I can see it looks interesting.

DS: It’s a really soulful 70s guy playing the saxophone. Basically, it’s a character that I designed when I was a teenager, but the whole point is he’s telling his story through his instrument, so he’s using his saxophone to express himself. Those deep feelings that we all have, and sometimes are unbearable, and sometimes are so beautiful, he’s getting it out through his horn, and he’s really soulful.