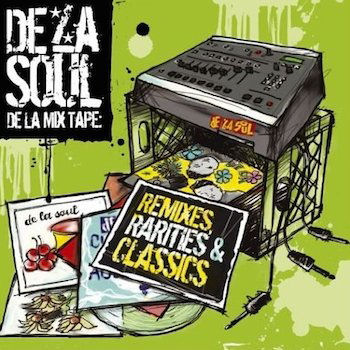 You may recall that in February, De La Soul celebrated the 25th anniversary of “3 Feet High and Rising” bygiving away almost all of their music catalogue for 25 hours. That period has long since expired, but one gem remains tucked away in their vault – “Remixes, Rarities & Classics.” Within the confines of their free give away were portions of a slept on De La compilation from 2004. If you’re trying to piece together the track listing from the huge pile of free De La music you downloaded, allow us to lend a hand. It’s a somewhat frustrating task to put it mildly.

Now let’s discuss the “Rarity” of the items in question here, particularly since De La Soul day greatly expanded the ranks of rare DLS material getting broadstream exposure. The remix of “Stakes Is High” featuring Mos Def and Enola Gay is a good starting point given only consumers who had the “Itzsoweezee” single got this new take. The following track takes a complete 180 as “Oodles of O’s” is from their classic “De La Soul Is Dead” album, which belongs on the short list of hip-hop albums you can’t live without. If stranded on a desert island with a lifetime supply of water, a boombox and a solar panel, that album better be in your emergency kit. This is followed by two true rarities which De La didn’t distribute on download day: the DJ Honda track “Trouble in the Water” and the flute solo over “Ring, Ring, Ring (Ha Ha Hey) called “Piles and Piles of Demo Tapes Bi-Da Miles (Conley’s Decision).”

Things settle down quite a bit after that. The next three compilation songs were all widely available at retail, although Prince Paul’s More Than U Know was another track conspicuous by its absence on download day as was “Sweet Dreams.”

The rest of the album is just as hard to assemble, although “The Magic Number” is the easiest track to find since “Oodles.” You won’t have the live version of “Potholes in My Lawn,” but going with the original is preferable – or you can even choose the 12″ mix. At this point if you wanted to just give up and buy the album from Rhino, I wouldn’t blame you. It doesn’t get any better given “The Hustle” from “America Is Dying Slowly” is absent from the “Rarities” they gave away as is the Yankee B remix of “Itsoweezee.” The DJ Spinna version of “Stakes Is High?” Nope. The Badmarsh + Shri version of “Me, Myself and I?” No way.

There’s a second side to this coin though, in that what De La Soul referred to as “Remixes, Rarities & Classics” in 2004 was highly deficient in De La rarities that definitely ARE included in their download day zip file. The entire “Clear Lake Auditorium” release was skipped over by Rhino Records, but “Sh.Fe.Mc’s” featuring A Tribe Called Quest and the truly TRULY classic old school throwback “Stix & Stonz” with Grandmaster Caz and LA Sunshine (among many others) gets new life. How did Rhino even come up with their list, and why did it not include either of these rare cuts? And if you’re going to do a De La album of “Remixes” and not include the epic 7 minute version of “Buddy,” check yourself – you wrecked yourself.

The icing on this cake is that De La reissued “3 Feet High and Rising” themselves with a bonus disc of 12″ single exclusives like “The Mack Daddy on the Left,” but this “Classic” was skipped. I can’t give De La an A+ for the “Rarities” they gave away free in February 2014, but I can give them a solid B+. Rhino Records shit the bed though on their album. They get a D-.