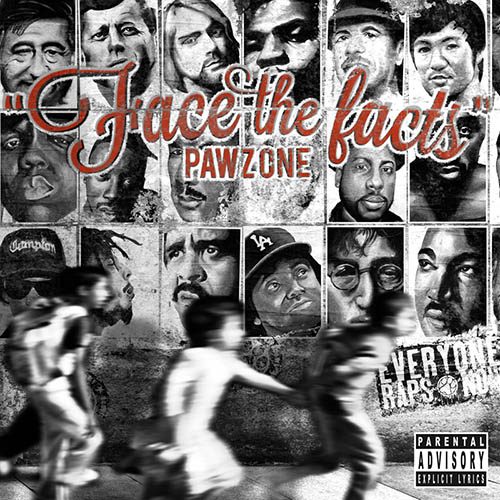 Mimicry is a form of flattery, yet I’m not really sure Pawz One’s “Face the Facts” ever flatters the numerous albums on the market that sound the same. One Dae, Sivion, Wyld Bunch and even Epidemic have all released records in the last year that despite being well produced slices of tradtional rap music, all of them failed to leave any lasting marks in the underground. With so many records being released each month, it’s hard to keep up on ‘throwback albums’, let alone every other style. By throwback album, I mean the records that use sample based beats, scratched hooks and generally proclaim their work as ‘the real hip hop’. Pawz One is undoubtedly one of those rappers, with his solo debut “Face the Facts” chockful of played out songs.

Pawz One does try to deviate from the standard “I’m representing real hip hop” message that could have bogged this record down, with “Blood Brothers” and “Trust No One” showing his ability to tell a story, but the overall package is let down by boring themes such as “Bringing It Back” and “Those Were The Days”. Despite living in the past, a lot like the guys Pawz One talks about on “People You Know”, there are a couple of collaborations that may interest you regardless of your feelings towards Pawz One. “Avalanche Warning” sees Rakaa Iriscience bless a busy DJ Default beat, but only makes you yearn for Evidence to drop some bombs alongside him.

Termanology and Ras Kass appear on the forgettable “Mind Power”, but the remix to “The Luv” is most certainly a keeper: a typically nostalgic collaboration with an emcee that always delivers – Masta Ace. It’s Pawz One’s rhymes that never really connect, thanks largely to his unconvcining presence and lines such as “I’m legendary on various drums” when he has genuine legends such as Masta Ace on his album, and every other beat is a Premo knock-off, it’s insulting. There’s also some odd decisions on “Face The Facts” – “Trust No One” suffers from a messy hook, and given that every other track features cuts it’s odd that Pawz didn’t trust DJ Breeze to hook him up. It’s disappointing as it’s a paranoid tale of regret that benefits from a haunting production. There’s also the strange decision to include “You Can’t Run Remix”, a song that sees Pawz One rapping over the Dilated Peoples hit “You Can’t Hide, You Can’t Run” for no reason whatsoever.

“Face the Facts” never really puts a foot wrong, but also doesn’t excel in any area. It’s all very blasÃ©, an album that ticks all the boxes, possesses some strong production and despite Pawz One being a decent emcee – it remains hard to recommend. It’s good for what it is, but much like One Dae’s “Daes and Times” album that was released recently, Pawz One fails to stand out in a sub-genre where modern boom bap is overloaded with artists. The big name guests do help hide some of Pawz’ shortcomings, but ultimately this is yet another record that will find favour with some fans, but for everybody else will deter them further from that traditional “real rap shit” artists such as Pawz One continue to bang on about.