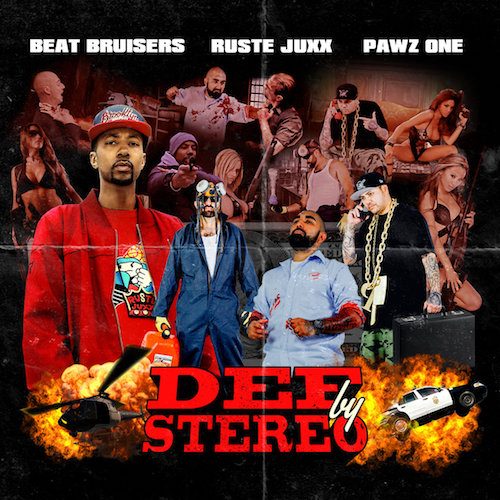 To hear California production duo Beat Bruisers tell it, the entire “Def By Stereo” album was a happy accident. They originally wanted to do a one off single with L.A. spitter Pawz One and East Coast/Duck Down representative Ruste Juxx, but the strength of that track (“Unph***witable”) led them to conclude a whole album was actually the better move. Apparently owing to nothing more than the sheerest of coincidental chances and lucky decisions we arrive at “Def By Stereo” on Below System Records.

Well… no. Nothing in the music industry works that way, and although it’s a nice story to tell the kiddies, there’s certainly no happy accident or lucky chance to this album coming together. It would be hard to even begin to assume that given they’re signed to Below System Records, a European imprint (The Netherlands to be price) which has only been in existence for four years. In that time they’ve already re-released out of print classics like Masta Ace’s “A Long Hot Summer” and Artifacts’ “Between a Rock and a Hard Place,” though they’re not biased toward the East or the old school. Newer acts like JR & PH7 + Chuuwwe represent both California and the new school in one shot. Every decision of this label seems carefully calculated to maximize their underground credibility and increase their fanbase.

My conclusion is that it was an easy call to bring together the already popular Ruste Juxx and their up-and-coming artist Pawz One and see if by combining both with a credible production team like Suplex and Harsh Ramirez (love those names) they could create a new group that lights the fires of hip-hop fans. Pawz could certainly use the boost since Grant Jones previously concluded that he “fails to stand out in a sub-genre where modern boom bap is overloaded with artists.” I don’t disagree with his assessment of that album at the time, which either means Pawz One benefits from the new team he’s a part of, or he’s just grown that much as an artist over the last two years – maybe a little of both.

Despite the wonky name (please come up with a clever acronym or pop culture reference) Beat Bruisers x Ruste Juxx x Pawz One is an easily digestible 35 minutes of music that mimics/pays tribute to other producers you already know and like with two emcees capable of busting up the tracks. Take one of the album’s longer joints for example. “Now” clocks in at 4:08 and the sped up vocal samples will have you thinking Kanye West, while the melody and breakdown will have you thinking Alchemist. If imitation is the sincerest form of flattery, then they should both be pleased by the boom bap quality of this song.

Guest appearances are kept to a minimum, which is a wise choice on such a short album, so Dro Pesci (“Give It Up”) and Spit Savage (“LA 2 NY”) don’t take up too much time or shine – neither do they bring the album down in any way. Even though the majority of the group hails from California, there’s a very New York feel to “Def By Stereo” – and I ain’t mad at it.