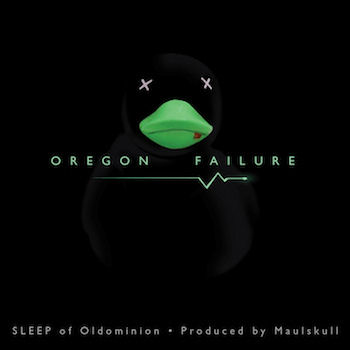 A friend and former RapReviews contributor caught my eye with a tweet the other day: “A lot of times I’ll read a writer’s work and I think ‘Are you reviewing the music or just part of the hype the label/publicist delivered?'” When you’re inundated with a few dozen albums at a time (more digital than physical these days), it’s hard to NOT look at a press release and think “Can YOU sell me on this album before I listen to it?” It’s not that any of us in this business want to swallow hype and then regurgitate it all over the reader, but a good publicist knows how to walk the line between hyperbole and outright falsehoods. In your mind you start comparing what you’re listening to to said hype, seeing if it lives up to the expectations you’ve been given, or if the hype was unfathomably egregious BS.

Sleep’s “Oregon Failure” falls in the happy medium between. That’s what I expected going in given the Oldominion rapper hails from the Sage Francis. So far as I can tell the last time we reviewed Sleep he was on a different label and in a different crew – one-half of The Chicharones. Of course digging into our own archives makes me wonder who was regurgitating what. So far as I know Sleep’s crew in Oldominion hail from Oregon (hence this album’s title) but writer Rowald Pruyn keeps referring to them as Canadian. What? I recognize that Oregon is in the Pacific Northwest, but last time I looked at a map, it hadn’t been annexed by British Columbia. Perhaps the publicist who sent him THAT press release was unbelievably full of BS.

In the case of Sleep we get press release descriptions like “a harmonic uplifting album, packed with substance” and hyperbole or not I’m hard pressed to disagree. Strange Famous encourages rappers to explore the furthest reaches of creativity and assume that the label will find the like-minded audience who will listen and buy it, so nobody’s trying to conform to making pop rap slop – certainly not Sleep. “Sinking Ship” is a maze of twisty little rap passages, none alike, with Sleep shifting from first to fifth gear in speed and stripping convention like gears of an engine. When the mood strikes he sings and harmonizes. Song titles like “It’s Out of My Hands” unintentionally suggest resignation to fate, when in fact Sleep’s lyrics are aggressive and brusque.

Sleep describes his own rap style highly accurately: “that feeling that takes over when I grab the mic and start spilling my soul/and finally let go of everything that makes me feel like I’m gonna explode.” That’s true of almost the entire album. The song title that suits him best is therefore “Truth Serum,” and at times the truth hurts. Considering Portland’s reputation as one of the cleanest and friendliest cities in the United States, there’s something remarkably dark and painful in Sleep’s raps, as though his life has been plagued by an inability to connect emotionally with friends or life partners. “She said ‘I love you baby boy I’ve got no reason to leave’/I said ‘Okay'” raps Sleep, but then he gets to the chorus and says “I’m out the door and she’s falling apart again.”

It’s hard to admit you’re taking some sort of perverse enjoyment out of Sleep’s pain, but the entire album is produced by his Denver based friend Maulskull, who adds a beautiful layer of instrumentals to pair with the pain. “I wish the sun would shine on me” quips Sleep on “I’m Sorry,” and speaking of hyperbole, the one thing I always hear people say about the Pacific Northwest is that it rains too damn much. Perhaps that’s why Sleep needs such cathartic rap albums – it’s some form of Seasonal Affective Disorder from not seeing enough sunshine. Regardless of why I won’t say that this album didn’t offer effusive praise in its press release. I don’t think it was necessary – Sleep speaks for himself. Your dividing line on your enjoyment of it will be if its too introspective, but guest stars like Pigeon John, Ceschi and Onry Ozzborn help to soften that blow. If you’ll forgive the pun, don’t sleep on this one.