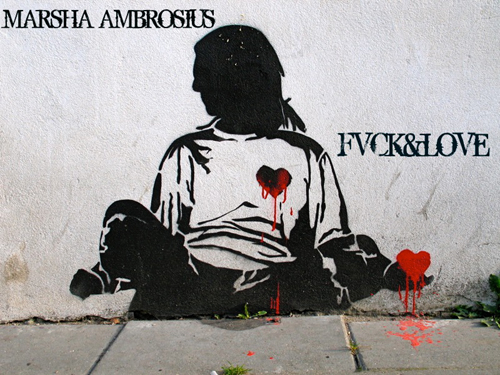 After a whole day of reviewing hip-hop albums for the site, I decided Marsha Ambrosius would be a nice change of pace, and thankfully for me she debuted a brand new (and FREE) EP on March 6th. If the name seems familiar it’s because you’ve already heard her before. You might remember her as The Songstress in the rap group Floetry, but it’s more likely you remember her from songs like Styles P’s “I’m Black” and “It’s Alright” by Saigon among dozens and dozens of others. As a soloist she’s been known for cutting (and I mean blood deep) R&B ballads like “Hope She Cheats On You (With a Basketball Player).” She’s hardcore.

Marsha’s “FVCK & LOVE” has one small problem, at least on my copy – the tracks are numbered 1-6 but there’s no #5. I don’t know if that’s because she didn’t clear a sample before giving away the free download and had to remove it, or somebody wasn’t doing their due diligence to make sure everything she intended to give away was in it. If you open it in iTunes there’s another problem – a different “album” is listed for every single song, and I used the word “album” in quotations because it looks like somebody thought they were the comments field instead. One actually reads “GOOOOOOOO!!!” It doesn’t affect the music either way, it just looks silly and entirely unnecessary.

Okay – this is disappointing – according to Rap-Up the missing song was titled “69.” Why you wouldn’t include what was likely the most freaktastic song of the whole bunch IDK, but this was a slow ass download to begin with – I’m not starting over. Out of the 5 remaining tracks the best is undoubtedly the epic five minute long ballad “Come” – and it IS freaktastic. It’s basically Marsha Ambrosius’ version of The Lonely Island’s “Jizz In My Pants,” only she’s not joking. It seems that every single thing her lover does to her makes her wet. I’ve thought for a while now that R&B is raunchier than it used to be when I was growing up, but this song confirms it. I’m not complaining though – Marsha can sing the hell out of that shit. “It feels so right when you’re touching my body.” I bet!

Production on this EP ranges from Da Internz to Eric Hudson, and there’s virtually no consistency of style and sound, not that it matters since it’s a free download from an incredible songstress (pun intended). It closes with the sorrowful “Friends & Lovers,” saying that she can only be one or the other, even though the unnamed antagonist “has the keys to my everything.” I guess he (or she) has to decide which of those two doors to unlock and go through. On the whole I’m not disappointed, but I bet that “69” was good.