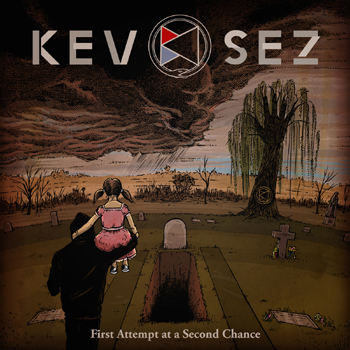 Kev says things like “This is the solemn anniversary of depth-charged cranium angels holding their fingers inside of my grey matter” and “My bedroom ain’t a homestead, it’s a prison cell / Chalked lines counting times and memories of where I dwelled.” If you paid attention, there’s a spectrum to his set of expressions that ranges from abstract to concrete. Still there’s a common thread to Kev Sez’ lyrics as they settle within the diameter of figurative language and mental introspection.

It’s easy to see that the artist’s first steps were made in the spoken word scene, but after a rather top-heavy start in the form of “Jupiter” his debut album “First Attempt at a Second Chance” quickly gets on the rap track with several solid song concepts. Despite its verbose title, “Thoughts of a Closet Existential Nihilist” is basically a drifter’s diary, as Kev gets up, gets out and gets himself a pack of cigarettes, not without contemplating the futility of it all. Meanwhile Buffalo Black’s production strolls along like some 1995 underground g-funk, adding a welcome dose of nonchalance to the nihilism. The song establishes drugs and death (plus rebirth) as two of the album’s major themes, although they are more prevalent in the second half.

“Kev’s Dead” might be a key track to Kev’s evolution as an artist (it sounds like an earlier recording), but on it he’s a victim of his jokey undertone and hypertensive flow. Rap masters such as Scarface (“I’m Dead”), The Notorious B.I.G. (“Suicidal Thoughts”) and Chino XL (“Rise”) have envisioned their own death in a much more existential manner. To be fair, “Kev’s Dead” mainly seems to signify a coming of age or a change of personality, and thus fits the overall theme the album title alludes to. “First Attempt at a Second Chance” is also the name of a sort of follow-up to “Kev’s Dead.” It’s the release’s most traditional hip-hop track, a smoothly swaying tune that sees Kev, assisted by Kristoff Krane, rise from the dead with a decidedly optimistic outlook. “Life Check (One Two, One Two)” could be a compelling finale, but it’s one of those instances where Kev Sez’ angle tilts towards corny and pretentious as he once more takes the listener through his entire lifetime from womb to tomb, drenched in religious and metaphorical imagery and finally framed with the well-known rap ritual known as mic-check. It’s a bit too much.

Conversely, you’ll gladly join him on the diverting “Enter the Void,” another personal and psychedelic trip, only that this time the existence of the entire universe is on Kev Sez’ plate. Reduction is the order for “Desert of the Real,” which is more slam poetry than rap and deals philosophically with that vague idea of ‘reality’ (with potential pointers to the works of sociologist Jean Baudrillard and science fiction author Philip K. Dick). “Smoke Signals” is his political moment, Kev attuning his vocals to the distorted rock background provided by producer Moodie Black. Curling back into personal space, “Crash” steers a relationship towards a car accident metaphor (although it first seems like he’s headed for a JFK assassination analogy) over Eric Dingus’ borderline schmaltzy concoction of piano and airy keys. “Whiskey Icarus” is a sober look at the deceptive solace that alcohol offers while “The Silence I Keep Away” is a highly relatable song about our inability to be alone with ourselves.

Kev Sez is an interesting character. Right at the beginning (and occasionally later on) he opts for a smart-aleck vocal tone that pegs him as one of those stereotypical nerdy white rapper guys who stubbornly resist extinction. But he soon displays some of the fundamental qualities we can rightfully expect from a vocal artist. Despite a poetic pen and varied flow he has still some way to go towards musicality and he’s nowhere near the level of artistry of some of his predecessors in rap (the likes of Slug, Sage Francis, Sole, or the late Eyedea). Nevertheless, with this first attempt Kev Sez earns himself a second chance.