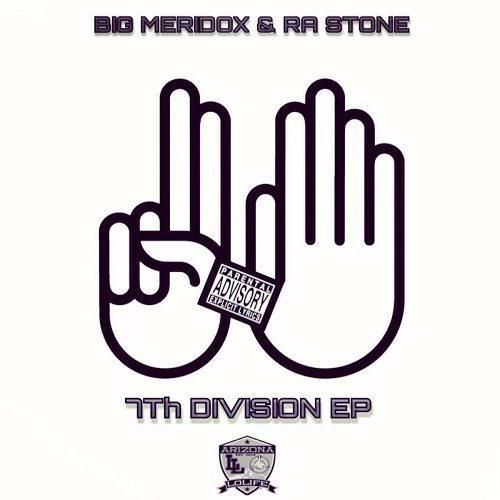 Big Meridox caught my attention a few years ago with his “DeLorean Fuel” EP, in no small part due to the fact the car mentioned in the title was a product of the 1980’s – and so am I. His ambition to be as famous (or perhaps infamous) as that car and its gull wing doors hasn’t faded in the last few years, though if there’s a reference to be found “7th Division” I’m not sure what it is. Sure there are 7 fingers up on the cover art, and coincidentally or not I’m reviewing this on Memorial Day, but I really doubt he’s referencing the famed 7th Infantry Division that fought in the Pacific during World War II and the Korean War. It’s more likely that “G is the 7th letter made” and the sample in the open of “Field Negro Rebellion” suggests I’m right.

Here’s what you need to know about Meridox though – he’s a Tucson, Arizona based rapper known for a deep gruff voice. It’s not as booming as Keith David or James Earl Jones, but few people ever born or ever will could match THOSE rich bass depths. He’s still a baritone and one whose voice will catch your attention, as will his casual hip-hop homophobia on songs like “Rugby King.” At times it can be mild and relatively inoffensive in quips such as “y’all some funny niggaz,” but at other times it seems unnecessarily excessive:

This doesn’t necessarily take away from the RA Stone produced track, though info on this beat maestro is even harder to come by than Meridox’s bio. He may or may not also be the DJ scratching the Wu-Tang samples on the hook, but I like his instincts in providing a Primo type break, and in his choice of R&B loop that says “GOT FRESHNESS… ALL I KNOW IS” repeatedly. It’s just odd to me that twice now on two different EP’s I’ve noticed Meridox being so effortlessly hateful. I think I hear hip-hop differently in my 30’s than I did in my teens – it seems less easy to dismiss it as braggadocious shit talking.

At times with rappers like Jarren Benton or Tyler, the Creator you can believe they are provoking listeners by being over the top, but Meridox really seems to have a Westboro Baptist level obsession. “Y’all some test dummy ass drag niggaz” is heard before we’re even a minute into album, as well as punchlines like “Bubble bath niggaz, sugar tank tough talk.” For Meridox the worst thing in the world is to be homosexual, which he equates with female stereotypes, even though most of the gay people I’ve known in my life didn’t act overtly feminine. “R&B suckers shuck and jive with the sucktooth/borderline faggots be lined up for the bathroom.”

There’s no doubt that RA Stone takes the rough edges off of Big Meridox with his beats, even though you can’t get through a single song without him asking questions like “where’s the real rap niggaz” and answering himself with lines like “bourgeoise bitches, rocking the wrong biology/faggot-ass niggaz androgynous with astrology.” It’s a shame because it’s not necessary for Big Ox to prove himself to anybody. Most people would hear his voice and think he’s a “man’s man” and the soulful loops RA Stone provides on “Saturday Gear” and “Blue Light Special” would seal the deal. There’s no problem with his flow diction, breath control, or general lyrical ability – aside from his obsession with being “not one for the fuckery/I’ll open hand slap the shit of you/y’all niggaz keep actin like that.” Does it even need to be like that Ox?

My philosophy has matured over the years. I used to casually refer to things I didn’t like as “gay” and looking back now I’m ashamed of that behavior. It proved nothing except that I had some bad programming I needed to delete. I think Ox has the potential to be great but the unnecessary and vile way he defines everything by stereotypes of what gay is and trying desperately to be the opposite of it holds him back. Meridox can do better and with a reboot he will.