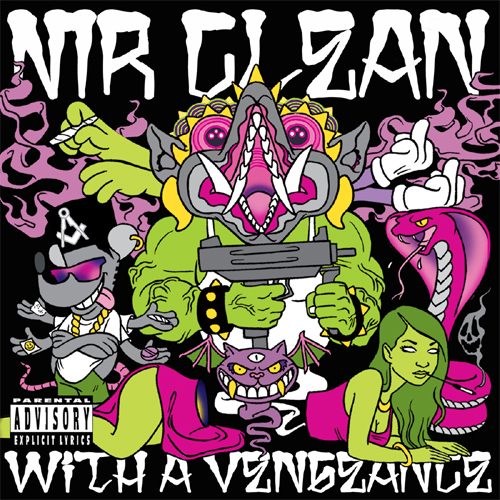 Mr Clean :: With a Vengeance

I’m sure some of you have “that” rapper on your radar, your “Mr. Most Anticipated”; he’s been in and around your local scene for years, you’ve seen him live a few times, he’s appeared on a handful of other people’s tracks and/or had a track or two of his own, possibly has been part of a short-lived duo or group, perhaps he’s had a couple different rap nom de plumes too – all of this but he’s never actually released an album himself. Well Mr. Most Anticipated for me is Mr Clean, who hails from my neck of the woods in Sydney, Australia.

In the album’s introduction Mr Clean refers to himself as a “2nd Gen spitter”, which is a good call i.e. in terms of our local hip hop scene, he’s not old school, not new school, but right in between. In fact, I’ve known of Mr Clean since sometime in the mid to late 90’s; (if memory serves me correctly) I used to hand the much younger version of him my hard earned dollars when he worked in the one and only specialist hip hop record store in this city, before I ever knew of him being an MC. I then started seeing him at a few gigs as a support act, then when he appeared on songs with the likes of local hip hop luminaries such as Ear Infection and Celsius he caught my attention as being more than capable, with a very distinctive style; from then on I was hoping to hear more from the man.

All was pretty quiet for a number of years but then a single called “Hard Yak b/w Closet” dropped a few years ago, which started getting me hyped with the promise of an album to follow. As usual for hip hop, that album was delayed a few times and seemed to take forever to come out – but FINALLY Mr Clean’s debut album “With A Vengeance” has arrived.

Straight off the bat I have to say that the biggest appeal of this album is that it feels fresh sonically. As much as I’ve always wanted my hip hop (Aussie and otherwise) to retain its golden era influences, the result is often played out beats and production styles which give me an unwanted sense of deja vu; this has been testing my patience in recent times. Throwback is all good, but when it takes the form of mimicry it becomes simply boring and the lack of creativity drives me nuts. However, the Clean album sounds rather different to your average underground hip hop release, thanks to the production by (primarily) Colord Noyz, with assistance from a couple others. Many of the tracks bring an electro industrial feel, which perhaps might be better described as a slowed down Drum and Bass vibe – this is particularly evident in the first half of the album. Don’t get it twisted, what we have here is undoubtedly 100% “keeping it real” pure hip hop, but the use of harsh synth effects, EDM style drum programming, teamed with some monstrous bass drops, all takes the music beyond the “how to make a boom bap golden era rap song” generic hip hop that we get from many golden era influenced artists nowadays. For its majority, musically the album maintains a consistent level of darkness and a powerful intensity and it’s very refreshing to have that feel achieved through progressive means.

Although it may be too much of an elementary, perhaps inconsequential aspect to some people, one factor that sets this album apart for me is the bass. It’s hard for me to think of an album from these shores that, by design or accident, sounds so damn good in “da ride”. The first five tracks on this album are backed with TRUNK RATTLING bass that would be totally wasted on an mp3 player’s headphones or PC speakers. Compared to a quite a few “backpack” type releases we’ve had over the years from my part of the world, many of which never seemed too concerned with sound quality, it’s really impressive to hear such dense, richly produced music. From purely an audiophile point of view it makes for a very enjoyable listening experience. “Hardware” is a prime example of this:

This track is quite ominous with its screeches and noise, and, of course, killer bass. “Diamond Thrust” is on a similar tip but is a more of a showcase of synths and sirens. Admittedly it’s not a great chorus, an issue which I have with a couple tracks on the album actually, i.e. the chorus duties might have been better served by some more DJ work, such as the nice DJ cuts on the album’s intro, but the sheer power of the track cannot be fronted on:

The intro “Bag of Merk” and other early tracks such as “Steroid Frauds” and “Ziplock” also dwell in the same realms of sound; “Steroid Frauds” is a trippy, ambient take on the sound, whilst “Ziplock” is an aggressive banger which brings bass thumps that would bring a smile to the face of DJ Magic Mike. Speaking of the Miami Bass legend, “Ziplock” takes in a bit of (modern) Dirty South influence and Clean accordingly toys with some double-time rapping, which admittedly comes across as a bit of a stretch for him technique-wise, but I do like that the man has the ability to his adjust his style to the tracks behind him. “Tundra” and “Ted Demme” are good examples of the stylistic diversity in his emceeing, where he employs the use of a tougher delivery to match the roughness of the production.

It’s not an all-out subwoofer assault here though as the album does delve into a broader range of styles once we’re half a dozen tracks or so in, but the initial feel of the album lingers and is never too far away; this earns bonus points for me as a cohesive album is always a good one in my books. The mock game show of “She took the $” is a 70’s influenced track with guitar and lively horns, which at first came to me as a bit of a shock in contrast to the bass dominant electro of the earlier part of the album, but it’s a funky one that has grown on me immensely after subsequent listens (Clean does get a bit drowned out by the activity of the instrumentation on the track though). “Enemy Tape” is a very dope late 80’s tribute, sampling from P.E. and such – yes it sounds a lot like something fellow Aussie hip hop crew Koolism have done quite a few times before, and obviously in hip hop as a whole it’s not a new concept, but the track is nonetheless dope for what it is and does well to avoid presenting as contrived. “Golden Frame” is the most chilled track on the album, with a jazzy feel that features some moody female scatting or the like. It’s an interesting one lyrically as Clean delivers a feel good verse which is rather more personal in nature; a celebration of life type dialogue where he gives props to his wife and kids. It’s rather different to his overall lyrical stance on the album, which is for the most part hip hop’s eternal need for the elimination of sucker MC’s. The track also features a decent verse from US rapper Odessa Kane, but actually I would’ve preferred Clean to go dolo on this song and pursue his own introspection further.

Speaking of guests, we have a few local MC’s along for the “With A Vengeance” ride and they definitely play their part in adding to the album’s appeal. “The Highway” is another laidback track, but rather than employing the jazzy touches of “Golden Frame”, this time it’s a headnodder of a blunted chill-out session. It features top notch verses from Sinks and Prince Naeem, both previously unknown to me, and I’m particularly impressed with the syrupy voice of Prince Naeem – he’s someone I’ll be looking out for in the future. We also have “Monsta Squad” which is a motherlode of a posse track clocking in at 8 minutes that features a diverse range of home grown talent alongside our album’s host i.e. Empress MC, 13th Son, Ello C, Abuse, Monchichi, Fame, Don Data and Lee Monro. The music takes a back seat here in the form of a slightly foreboding minimalist track which allows each MC to flex their verbal muscles. I’m not going to bore everyone by doing my best Kool Moe Dee and giving out a report card on a each and every MC, especially since only a handful (or less) of our readers would have heard of any of them, but standouts for me are the underappreciated veteran Don Data (AKA Sleeping Monk), the deep toned 13th Son (another veteran from the 90’s like Don Data, good to know he’s still around), and the newer school MC’s Ello C and Empress MC have charismatic and skilful flows that are very memorable. Having heard bits and pieces of her own work, I see a lot of potential in Empress MC as somewhat of a future torchbearer for female Oz MC’s. We need more like her and less of the Iggy Azaleas of the world; I hope she lives up to my hopes.

“Tundra”, “Ted Demme”, “The Funeral Song” and “Faith in the Raw” all lie within the realms of the sonic assault provided by the first handful of tracks. “Tundra” is particularly strong with an expansive and moody feel; Clean makes reference to “synthesised melancholy” in the song, which sums up the vibe of the track perfectly. The weakest song for me on the album is “The Funeral Song”, which is perhaps surprising given that it’s produced by the biggest name producer on the album i.e. the UK’s Beat Butcha. I think the problem is exactly for the reason of who produced it – it just sounds all a bit too 2014 generic compared to the rest of the album and I could think of a number of US artists making this exact type of track – it’s not a bad track per se, but the early album tracks totally annihilate its appeal and this is another one with a rather unimaginative chorus delivery. Much, much better is the haunting and hard late album track “Faith in the Raw”, which brings us full circle to where the album kicked off sonically, and I’m not mad that it has some modern era Mobb Deep edge to it either:

I realise the focus of this review has been more on the music than the emcee. That’s not a meant as a slight on Mr Clean at all, but rather an indication of how good the music itself is. The most appealing quality of Clean as an MC is that he simply sounds unique – he’s not the most technical or dazzling MC out there, nor does he have a dominant, intimidating voice that would scare old ladies, but there’s something different in his vocal tone and style that is simply type nice – I can’t think of one rapper from these shores (or elsewhere) that he sounds like. It’s also good to know there isn’t any overdone tough guy brashness and no fake accents or exaggerating the local accent to sound more “Aussie”; it’s easy to tell the man is just being himself, which is really endearing to me. The album closes out with the reflective “Ambition”, which along with persistence is obviously something that Mr Clean has in spades after staying in the grind some 15 years or more and eventually releasing his debut album; it’s a pretty impressive one.