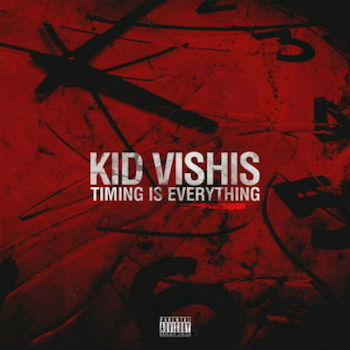 Kid Vishis :: Timing Is Everything

“Timing Is Everything” is a painfully safe record and lacks creativity. Yes, Kid Vishis is a skilled battle rapper and he has some quality punch lines on this album, but his “rap on juices and berries” rarely translates into good songwriting. Much of the album is filled braggadocio and battle raps held back by lazy and ineffective hooks that focus on tired rap cliches. “Talk Behind My Back” and “Look at My $hit” sound especially dated, while “In Yo Face” uses a cheerleader chant as a hook and is one of the more cringe-worthy things I’ve heard in a while.

In addition to poor hooks and relying on cliches, the production on “Timing Is Everything” is also pretty mediocre. Being a well-respected emcee in a city with some of hip hop’s best producers, Kid Vishis should have been able to get better production that what’s on this album. A lot of the beats have a grainy lo-fi sound to them, but not in the raw, “36 Chambers” way, but more of a low budget, poor sound quality way. Mr. Porter (of D-12) produces two tracks on this album – “Message to the MC’s” which is one of the better beats on the album but still a disappointing beat from a producer as good as him and “The Juice,” which is also not all that impressive. “Heaven” is one of the few times on the album where the grungy, lo-fi sound is effective and has a nice energy for Vishis’ aggressive raps.

There are a few solid moments where Kid Vishis is able to utilize his talents and put together an effective song. “Beautiful Day” has Kid Vishis rapping “work hard, grind hard, get money” over a nice flute sample, and on “Bird’s Eye View” Vishis successfully channels Eminem on one of the more lyrically strong tracks on the album. And on the finale, “Coward” Vishis trades bars with his big bro and holds his own.

Fans of battle rap and clever punch lines will undoubtedly enjoy this album more than I did. For the most part the rapping is very good on this album, but I believe it takes more than good rapping to make good songs and albums. Kid Vishis has the talent to be a good artist, but it seems like he’s more focused on a specific battle rap lane. Which is fine, there are several rappers who have done well for themselves by doing that. But if Vishis ever wants to be remembered as more than Royce da 5’9″‘s little brother, he’ll have to do a little more to stand out in the future.