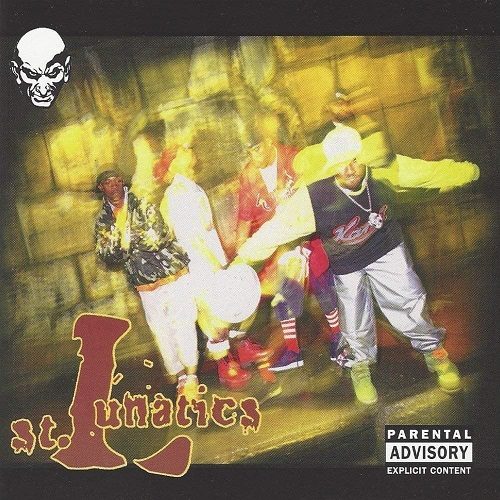 Before they discover their personal winning formula, rappers often go through different images and outfits. Cam’ron and Mase, then known as Killa Cam and Mase Murder, formed Children of the Corn with the late Bloodshed, Snoop, Nate and Warren G made up Long Beach’s 213, Naughty By Nature put out an album as The New Style, etc. Once they hit it big, these stars rarely ever change back to their unsuccessful former incarnations. Not so Nelly. Even while becoming one of rap music’s fastest rising stars in 2000, he made it clear that his loyalty was with his crew, the St. Lunatics. Now there are certainly many up-and-coming rappers who vow they’re gonna put their crew on once they make it. Only a few are able to keep that promise, and in most cases it takes them years to put their plans into action. But after Nelly’s multi-platinum debut, the people at Universal reacted quickly and put out a St. Lunatics album less than a year after “Country Grammar”. While “Free City” is rightfully considered the St. Lunatics debut album, the group actually put out an independent EP as early as 1998 (re-issued in 2001 as ‘Nelly and the St. Lunatics’).

Even this self-titled EP followed almost two years after the St. Lunatics made their initial splash with the single “Gimmie What You Got”, which received massive local airplay in 1996. The group had a deal with D2 Entertainment, a St. Louis studio/label venture owned by twin brothers David and Darren Stith. But when neither a second regional hit (“Who’s the Boss”) made it happen for them, they started looking for new connections, eventually hooking up with the then Mase manager, who convinced them to single Nelly out and shop him to major labels. Sure enough, in 1999 Nelly signed to Universal Records, on condition that they also sign the St. Lunatics as a group.

You certainly have to give Universal credit for business decisions like these. Starting with their distribution deal with Cash Money Records, Universal successfully went after Southern and Midwestern rap acts and broke them nationally, from the Ying Yang Twins to Afroman. Arguably, not all these acts had a track record as strong as David Banner or Pastor Troy. In fact, it’s easy to imagine that signing both Nelly and his Tics was quite a gamble. They hadn’t moved tens of thousands of units independently, and most talent scouts listening to the “St. Lunatics” EP would have left with a few encouraging compliments. But Ali (AKA Big Lee, who had been a solo artist years before he met the others), brothers Kyjuan and Murphy Lee and half-brothers Nelly and City Spud had their eyes firmly on the prize, at least going by a song title like “Platinum +”.

The EP starts with a instrumental intro (“Chapter 1”), whose movie quotes (Michael Madsen in “Reservoir Dogs”) lead into the first proper track, “Who’s the Boss”. The same opens up with Jay-Z’s “I’m the boss, and that’s how it’s gon’ be,” a phrase that is repeated after every verse. Judging from their cocky attitude, the St. Lunatics were destined to succeed. Nelly remembers that “babe played Nelly like I was nobody / now she all on my team cause she heard I rock parties,” while Ali “spoke to Luv, from here on out everything copastetic / 105 gon’ bump it, Lunatics blowin’ like a trumpet.” Part wishful thinking (“jealous cause when it come to hits, Tics got many”), part the result of their first taste of success, “Who’s the Boss” shows a young crew that despite their newfound local celebrity would never imagine they’d soon go on to sell millions of records worldwide. The sad irony is that City Spud, who is currently serving a 10-year sentence for robbery and armed criminal action, could almost figure as the St. Lunatics lead rapper, given his presence, compared to say Nelly. But now City, whose incarceration was referenced in the album title “Free City” and who is still represented by the band-aid sticking to Nelly’s cheek, pays for his prison stay with his royalties from “Country Grammar”. Looking back, it’s a trip to hear Murphy Lee say “just avoid addin’ il- to legal, says my peoples.” The same goes for “St. Lunatics connect like Voltron, we way beyond your level / couple of platinum hits could settle my problems a little.” Unfortunately, Spud has problems no amount of platinum hits is ever going to solve. Still, it becomes clear that the loyalty the Lunatics expressed for each other back in 1998 wasn’t a gimmick.

Staying loyal to another person in particular paid off well for the Tics. The man behind the Nelly sound, Jason “Jay E” Epperson produced this entire EP. While the tracks rely heavily on samples, he enhances them with layers of flurrying keyboard flashes that give them their characteristic futuristic gloss. “Who’s the Boss” samples Dennis Edwards & Siedah Garret’s “Don’t Look Any Further”, and the “Low Down Dirty Remix” of “Gimmie What U Got” jacks a similarly syrupy ’80s song. The only real surprise is a rowdy remix of “Platinum +” that rocks as hard as any MOP banger. Other than that, “St. Lunatics” is intent on not hurting anyone except haters. Mostly in tune with the lyrics, the sound contributes to the party vibe of this release, which features only few cuss words (and is edited to boot).

Arguably, the St. Lunatics and mainly Nelly have stepped up their game since. City Spud’s claim to take “over everything with this lyrical scheme” isn’t exactly based on evidence, but it’s clear that the St. Lunatics see themselves as rappers, rather than gangstas, pimps, ballers and what have you. And like on their later releases, you never know when you run into a funny line like “Post office hoes about to get you for your mail, dog” (Lil T AKA Murphy Lee), “Tryin’ to compare your click to mine, you need Heinz to Ketchup” (Nelly), or “What you go to trial for? You guilty of bein’ wack / if Carl Lewis was your cousin I wouldn’t put you on my track / it’s a lyrical jack (get down) Neal [/kneel] like Shaq” (Kyjuan). Not to mention that the hook of their very first song paid hommage to Eric B. & Rakim’s “Move the Crowd”…

In retrospect, rarely was a rapper ever proven more right than Kyjuan when he said in “Gimmie What U Got”: “It’s a fact, Lunatics will put St. Lou on the map.” We’ve already witnessed the second wave of rappers from St. Louis, from Chingy to another D2 Entertainment discovery that ended up on Universal, Pretty Willie. Take that into account and be amused to find out that the Tics seem to have had trouble getting accepted at home. Says Nelly defensively: “Now I know niggas tryin’ to say that Lunatics East Coast / cause my lyrics boast with flavor / but fool, I’m just your neighbor.” Now, after the “dank abuser supposedly with no future” established “Nellyville” nationwide, the neighborhood has expanded to millions of households.