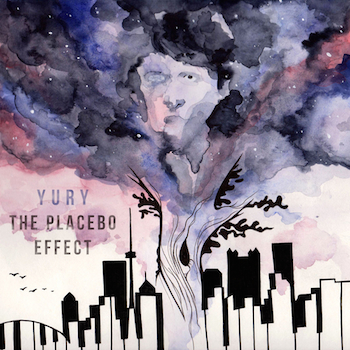 This is Pittsburgh rapper/producer Yury’s fifth mixtape in two years. Not bad for a weed-hungry artist who also managed to graduate from university in the meantime. This is my first encounter with him, and my opportunity to see if his music is more effective than a sugar pill.

Right off the bat, his beats stand out. They mix elements of street rap, ambient electronica and 80s electronica. “Be Right Back” has watery synths that sound right out of a 80s movie soundtrack. Many of the beats are both pretty and sad, but sometimes he goes for a nastier sound, like with the dirty synths on “Patient” and “Quotient.” He gives the tracks plenty of room to breathe, often waiting several bars before coming in with his raps. This gives the mixtape a similar feel to the new Shabazz Palaces, although “The Placebo Effect” is less trippy and more rap-centered.

As a rapper, Yury spits rapid-fire verses that are largely about being a struggling artist and enjoying the sweet leaf. On “Patience,” he raps:

“If I write a verse I might feel accomplished
DOLO I made the beat on my own, bro
So I don’t need an accomplice
Time money
I need a profit”

All of this is delivered in the laid-back style you often get from rapper/producers. I don’t know what it is about a producer picking up a mic, but whether it is Madlib, Dre, or Dilla, they almost always sound like they are THIS CLOSE to falling asleep. Yury’s laconic and monotone delivery combined with his spacey beats makes “The Placebo Effect” feel a little sleepy as an album.

The bigger issue is that while Yury has some complex, rapid-fire verses, they are often garbled and hard to understand. He has a tendency to slur his words that makes it difficult to make out exactly what he is saying. As a result, it was hard for me to care too much about this mixtape because there seemed like there were zero stakes. That’s ironic given how many of the songs are about Yury’s passion for his craft.

“The Placebo Effect” has some good beats, and Yury’s laid-back flow worked for me for a couple songs. I wouldn’t invest hard-earned money on this, but if you’ve worn our your copy of “Lese Majesty” and are looking for more spacey rap, check Yury out on DatPiff or Amazon or Spotify.