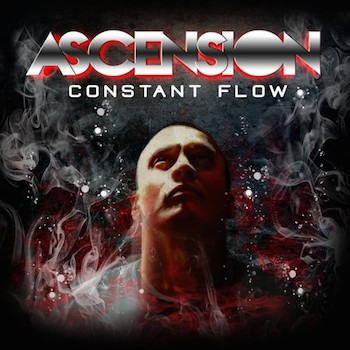 CF a/k/a Constant Flow appears to have jumped ship from theImmortal Technique, and the two are very similar in their world view and politics – exemplified by the song “Anatomy of a Revolutionary” early on in his new “Ascension” CD.

“.. Enjoying my time at a BBQ
With my loved ones, my cousins, no thuggin
Bumpin a little bit of R&B
Some Marvin Gaye, little bit of Chardonnay
But the Jakes they wanna fuck with me
So the block is poppin
and papi pumpin his Spanish music
Only black dude in my hood
and I’m pushin that pana-movement
Everybody’s dancin groovin, no problems happy musin
No nasty attitudes ‘n, just a average family reunion
When out of nowhere come the pig
Bitch from hell, Jezzabelle, she a dominatrix
With a cuff and a stick and a gun
and a clip for any confrontation
Type of chick that’ll blast first
Don’t ask first, for no conversation
Storm in with a war in for my stereo to confiscate it
Fuck, that!
First they take yo’ drums then they take yo’ freedom…”

Things only go downhill from there, as the cop takes turns calling him an illegal immigrant and insulting the female members of his family, escalating the situation at every turn. It’s no surprise that by the chorus each time he’s describing himself as “the blood of Jesus Christ, the head of William Wallace, the heart of Che Guevara” – mixing one radical revolutionary with another into the potent cocktail that makes up the righteous fury in his veins. When Technique finally joins him on the ironically named “Moment of Peace” it seems like the tag team that should have been partnered up YEARS ago. Tech delivers his animosity in relatively hushed tones for him, but when he says “I’m out of shits I used to give/so close to death, I see the lives I used to live/my future kids, I leave ’em with this tutelage” you should know exactly where here’s coming from.

Thankfully it’s not the only time these two link up as Technique reappears on the gothic “Devil’s Maze,” and the righteous fury and anger they have at racism and injustice is not lessened one degree. It’s not all bleak though. “Celebrate Life” with Chino XL and Wyme sounds like the “Rocky” soundtrack, an upbeat headnodder that you can feel good about even when so much of what CF raps about is bad news. I half expected a Frank White sample on “You’re All Welcome,” which probably would have been too expensive to clear, but CF wavers between the excitement of his flow and the negativity around his life that “gave me a bad dream, where I had gangrene/both my legs still here, but I saw a wheelchair.” CF may stand for “Constant Flow” but throughout this album you might think it’s “Constantly F#%#!d” because even as dope as he is he thinks there’s a glass ceiling of disenfranchisement he can’t break through.

The good news is if CF feels contiually fornicated it at least gives him the extra fuel to fire up his passionate delivery. Combined with the well above average production on “Ascension” this album delivers a solid hip-hop release from start to finish. Viper definitely has fangs but when this one bites, the poison turns out to be the cure.