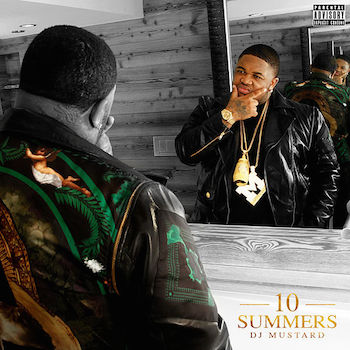 Every few years, a producer comes through and becomes the hottest thing since, well ten summers. We’ve had Trackmasters, Timbaland, The Neptunes, Just Blaze, Lil Jon, Timbaland again, David Guetta and now it seems to be DJ Mustard. You only have to look at some of the biggest hits of the past 12 months to see why he’s so in demand: Kid Ink & Chris Brown’s “Main Chick,” T.I. and Iggy Azalea’s “No Mediocre,” most importantly the will.i.am hit “Feelin’ Myself.” The former Black Eyed Pea’s latest club banger “It’s My Birthday” even sounds like a DJ Mustard track.

The features on “10 Summers” consist mostly of party animals on hiatus between albums, or street emcees waiting for the annual call from DJ Khaled. Speaking of Khaled, DJ Mustard keeps this record short and sweet, without overloading songs with as many renowned names as he can. The adage ‘less is more’ is most certainly apt when listening to a Mustard beat, and the same applies to his album. “Ghetto Tales” and “Throw Ya Hood Up” are impossible not to move along to, regardless of the inane subject matter. While the latter sees Dom Kennedy, Royce and RJ craft a guaranteed club hit, the overabundant use of the word ‘nigga’ is enough to have Chuck D bring more than the noise. “Ghetto Tales” on the other hand, sounds like some throwback Eazy-E. Jay 305 makes the Sugarhill Gang sound like Chino XL, but it’s so bad it’s good.

Proclaiming “I’m pregnant” without even changing his tone in a verse, making him sound schizophrenic in the process, or worrying about his scuffed Guccis in the midst of a police chase – it’s all wonderfully silly. If your name is Dijon and you name yourself DJ Mustard, you’ve instantly got my attention. Thankfully, DJ Mustard’s style is similarly easy to like, boasting some of the simplest, catchiest beats you’ll hear all year, but the word that sums up Mustard in a nutshell is ‘ratchet’. He’s even declared his style as ratchet.

It describes “10 Summers” perfectly, as it’s trashy, loud and seductive. Just as a chick that’s ratchet will turn your head (for better or worse), the fact remains that she turned your head. Heavily inebriated in a sweaty nightclub at 3.30a.m, you may find yourself indulging in some ratchet royalty, and DJ Mustard would be right there encouraging sexual dances and animalistic behavior, and you’ll love every minute of it. Except DJ Mustard’s debut doesn’t even qualify as a guilty pleasure because like Nicki Minaj’s derriere, it’s all over the place.

For every sweet beat, there’s a song-destroying moment to follow. There’s a half-song in “Tinashe Checks In” that teases R&B, then a slick collaboration between Eric Bellinger and an unrecognizable Fabolous on “4 Digits” that flips the “trying to get a phone number” situation on its head, instead stating that she will never get the 4 digits to unlock your phone. Rick Ross’ verse on “Deep” is barely audible when paired with Teeflii’s spectacle-shattering levels, lending an unfinished aura to the end of the record.

Another big name stumbles on “Face Down”; Lil Wayne fails to redeem himself after years of a steady decline in to a slurring, alcoholic unlockable from the Tony Hawk games. He’s noticably off-beat and distracted even with Mustard’s overly distorted bass that will have you checking your sound card, sub-woofer as well as your ears for wax. Then there’s Ty Dolla $ign. He makes a couple of appearances and fails to convince me of his worth, having hated my stay at his “Beach House EP” earlier in the year.

DJ Mustard may be the hottest thing since ten summers, but he’ll need to create a better, more consistent follow-up to maintain that level of heat, else he’ll reside with the Scott Storchs and Heatmakerz of this world before long. He promises a legacy along the lines of DJ Quik and Luke, which only time will tell. For the moment, we are treated to a promising if frustrating record that remarkably lacks a hit single itself.