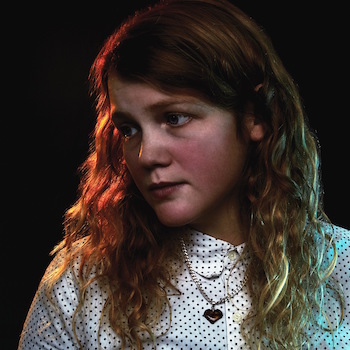 While all rap music could be considered poetry based on its form, not all rap music is poetry in the Merriam Webster definition of “writing that formulates a concentrated imaginative awareness of experience in language chosen and arranged to create a specific emotional response through meaning, sound, and rhythm.” Even good rappers only offer occasional “poetic” moments in their songs. The majority of their time is spent on less literary pursuits. Hip-hop is party music, after all, and it is hard to rock a party and comment on the human condition at the same time.

British rapper turned poet turned rapper Kate Tempest attacks rapping with a poet’s ear for language. Her poetry is informed by her love of hip-hop, and her rapping is informed by her love of poetry. She’s also a playwright and has performed Shakespeare. There’s certainly a theatrical element to her debut album, “Everybody Down.” Not only is it poetry by way of hip-hop, it’s also a story divided into 12 songs. Let it never be said that Tempest takes the easy way out. Given that rock operas and concept albums have a history of being overlong, self-indulgent, and convoluted, the listener can be excused if they approach the idea of a hip-hop opera with trepidation. While “Everybody Down” falls into some of the common traps that plague rock operas, it mostly succeeds.

Tempest has a thick South London accent, and you can definitely hear the spoken-word influence in her delivery. The most obvious comparison is Mike Skinner of The Streets, who has a similar accent, storytelling style, and outsider perspective. However, as amiable as Skinner is, his music often felt frivolous and inconsequential, at least to me. The same cannot be said of Kate Tempest. Her lyrics are serious as a heart attack, and she is intent on making art that Means Something. At a time when hip-hop is the template for a lot of meaningless pop music, it’s nice to see someone treating it like art. Also, she can rap. She cites Roots Manuva as an influence, and you can hear some of his smooth, reggae-lilted flow in Tempest’s delivery.

As a poet, Tempest has a gift for words. “Everybody Down” is full of moments in which she captures what it is like to be young and broke and confused in just a few short sentences. “Everywhere is monsters…shouting and screaming just to prove they exist” she starts out on opener “Marshall Law.” She sums up the shallow crowd at a video after-party in just a few cutting words. “Everybody here has a hyphenated second name/Blowing more breeze/Than the wind at the weather vane.” “The world is the world but it is all how you see it” she raps at the chorus. “One man’s flash of lightening ripping through the air is another’s passing glare, hardly there.”

The story follows the exploits of a young woman named Becky who works as a waitress and masseuse and spends too much time and money drinking and doing drugs. Tempest describes her as having “Eyes full of mornings/Spent without sleeping/Grew up in a city where it’s hard to be heard and nothing really has much meaning.” Becky meets local drug dealer Harry at a party, then meets and falls in love with his younger brother Pete. Harry is trying to save up money to open his own club. Pete is just trying to make an honest living in post-recession London. Pete and Becky fall in love, but learn the hard way that love fades. “If I love you like I say,” thinks Pete in “The Stink,” I would not treat you this way.”

As is the case with almost all rock operas, the storyline is hard to follow. Tempest tries to tackle a lot in the confines of an hour long album. Each track seems to introduce two or three new characters, and it is hard to track all of them. Essentially what happens is that Pete is jealous of Becky’s side gig as a masseuse, Becky is pressured to blur the line between masseuse and sex worker, and Harry and his friend murder and steal drugs from a supplier. Pete ends up convincing his mother’s boyfriend’s son Dale to book a massage with Becky to see what happens, and Dale recounts how the massage went when he sees Becky and Pete at a surprise party on “Happy End.” Pete and Dale get in a fight, and Becky runs off with Harry and his friend Leon, because they are both in trouble with Becky’s uncle.

“Happy End” is indicative of what is right and wrong with “Everybody Down.” There are so many characters that it is impossible to keep track of what’s going on. Take this passage, for example:

“Dale and Pete
Were in a pile of trainers and feet
Clenched fists and black eyes and chipped teeth
Their dads had tried
To get in-between them
It was like they couldn’t wait to get involved
Graham was beating David’s skull with his elbows
David was kneeing Graham’s nether regions
And Miriam was at the bar weeping
Ron was pleased as punch
With the outcome of the evening
While Becky, Harry and Leon headed for the beyond”

That’s nine people mentioned in one verse. Even if it were a play, story, or movie there are too many characters. The fact that this is happening in song form makes it even more of an issue. Tempest is much more effective when she focuses on the little moments and doesn’t try to bite off so much at once. The next verse in “Happy End” describes Harry, Leon, and Becky’s getaway, and it packs a bigger emotional punch:

“Off to Dover for the ferry
And from there, wherever
Harry looked at Becky
‘Let’s feel this way forever?'”

Of course, that’s the same thing she said to Pete earlier in the album, and you know that they are probably going to get caught by the mob, and even if they do escape Harry and Becky are probably doomed. The aggressive beat hammers in just how hopeless their situation is. Still, in just a few words, Tempest manages to capture the fleeting feel of young love.

What ultimately makes “Everybody Down” successful (and most concept albums for that matter) is the way in which it allows the listener to connect with the story. We care about what is going on with Becky and Harry and Pete because they reflect our own experiences. I can’t relate to being a young sex worker or drug dealer, but I have definitely blown it with a cute girl by saying too much, and I’ve had to work a crap job that was beneath my degree, and I’ve been cruel to someone I was in love with, and I’ve experienced love fading, and my dreams fading, and felt like my life was losing its meaning. Tempest manages to bring those experiences to life in her songs in ways that seem real and true.

“Everybody Down” may try to tackle too much in its 48-minute run time, but even if the story isn’t always coherent, the emotions of the characters shine through. Kate Tempests paints a world of young people who are searching for themselves and meaning in a world that seems to offer only disappointment. In doing so, Tempest reminds us that rap music can be art, and that the poetry of rap can indeed be poetic.