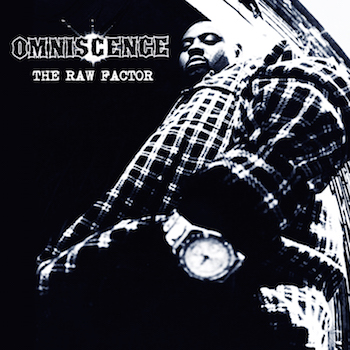 At first I thought the press release I got for “The Raw Factor” was a rib on me. Nearly 20 years ago when I was working in college radio I was mailed promo copies of Omniscence “Amazin'” on 12″ vinyl and CD single. The song was pretty fly – no doubt – O was a punchline rapper who bragged “I’m gettin up in skins like Massengill/that’s the deal/not the Guru, but I got +Mass Appeal+.” I dug the song and the enclosed remix, where he dropped brand new lyrics on a brand new beat, even spelling his name backward at the end to show off how different it was from the original. “I ain’t goin out like Eazy (E)” was his vow – Omniscence was poised to be a major factor in hip-hop from ninety-six ’til infinity.

What happened? The scheduled album on EastWest/Elektra never materialized. I sat on my personal copy of the single all these years thinking something bad must have happened to O, but back in those days there weren’t a hundred hip-hop gossip blogs up in everybody’s business. In fact there wasn’t even TMZ or Wikipedia back then – not that the latter would be helpful given their policy on “notability” – but anyway Omniscence and his album seemed to disappear without a trace. It turns out that nothing dramatic happened. Omniscence dutifully recorded the entire album and gave it to the label expecting them to put it out, and they sat on it… and sat on it a while longer… and then EastWest went through a series of acquisitions and mergers. It turns out O was nothing more than a victim of industry rule #4,080.

Now classifying “The Raw Factor” is a bit of a problem, because if it had actually come out back in the 1990’s when it was supposed to, this would be a Back to the Lab review. 18 years late or not though this is a NEW album, which until now was only held in partial incomplete bootlegs that got traded around between the heads and occasionally pressed up on vinyl – most (if not all) of which completely cut O out of the revenue he was rightfully due. Thankfully this version of “The Raw Factor” is official, straight from the man and from HIS man Henry, who are now releasing a copy that they blew the dust off via Bandcamp. All the long overdue ducats (there’s a 90’s term for you) will finally go to Omniscence. “If You Got Beef” illustrates why it was such a damn shame this got delayed.

O has a raw aggressive lyrical style that fit perfectly next to contemporaries like Redman and Sticky Fingaz, and still has enough moxie to work today – even if some of the references and musical choices are going to be dated for obvious reasons. In fact if we’re being perfectly fair the new jack swing of “My Main Man” was already out of fashion by the mid-1990’s, which actually makes it BETTER for the song to come out now. Suddenly the mellow up-tempo swing and bop of the track and lines like “I’m never goin’ out like Bishop in +Juice+” seem throwback/hip. Whoever O’s friend is on the track shows him incredible loyalty and vice versa.

“What about the beef that I had with this kid?
Only two minutes away from a murder bid
But yo – you let me know I got a life to lead
Money to make, a seed to feed
Nuff love my nigga cause you saw the dream
And you didn’t get jeal’ when I got the cream
So now, when I sip Chandon Moet
I smoke a fat blunt so I don’t forget
that we came a long way, a long way to go
To my peeps in the Greek, I had to let you know
You my nigga, word is bond”

Production on this track and throughout the album is handled by Fanatic, and that’s something of a throwback in itself – it’s far too rare to have one producer only on a major label these days (though indie rappers on Bandcamp have been bringing it back).

After playing through “The Raw Factor” a few times I’ve come to a few conclusions. First – Omniscence is like a more intelligent, more amped up version of Mr. Cheeks crossed with Buckshot the BDI Emcee. He’s got the same gruffness to his style and delivery, but you’ll never catch him on some “she wants to be a lawyer, in other words shorty studies law” whackness. The second conclusion is that EastWest/Elektra made a BIG mistake not putting this out. “We Lust For the Papes” is a smooth boom bap rap about how none of us can survive “without the root of all evil.” I can’t help but laugh at his snaps on tracks like “Touch Y’all,” politically incorrect and all, bragging that he has “mo’ niggaz than a slaveship” and that him getting dissed would be like “the Geto Boys doing Christian rap.” The third is that I can’t tell the difference between what the original album was supposed to be and the bonus tracks O and Henry included from “The Funky One Liner” EP that preceded it. I don’t think it matters since nothing on the tracklist indicates it. Just enjoy the funky raps like “Was It Just You,” where he gets his horndog on.

A nice surprise to me was the “Touch Y’all” remix, featuring an all new beat and a guest rap by Sadat X, and now I wonder why I never had THAT promo single in my college radio days. Better late than never though – and that statement applies perfectly to “The Raw Factor” as a whole. “I told The Source give me SIX mics.”