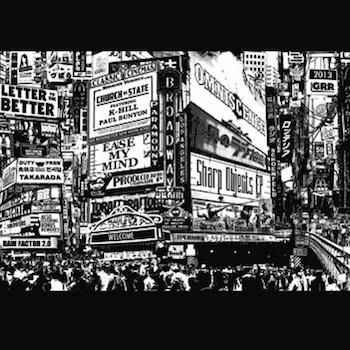 Late last year we addressed “The Raw Factor,” a Omniscence album that has been lost in action for nearly 20 years due to music industry politics and record label mergers. O’d publicist Henry broke off RapReviews with a copy of this long lost gem, and just when I thought that was the end of the story, Henry hit us up again to show me that was just the tip of the iceberg. Omniscence was wisely taking advantage of the obvious publicity to be garnered from putting out his decades overdue album by dropping some brand new material. On “Sharp Objects” he directly references his resurrection from obscurity with “Raw Factor 2.0.”

“For Pete’s sake, I ain’t walkin to BK for cheesecake
I’d rather catch a beat break
Nuttin wrong with goin out for your dream
But me I’m goin out for the team – you’re damn right
People say I had that chance to blow
And asked why a nigga got missin like D’Angelo
Cause I don’t do it if it ain’t from the soul
This is Raw Factor 2.0, so let’s roll”

According to Henry, “Sharp Objects” is just a small taste of a new full-length album Omniscence plans to drop in February. That goes a long way toward explaining why this album is so stacked with remixes. There are five completely new to the ear tracks – “Welcome,” “Ease My Mind,” “Letter to the Better” with Keisha Shontelle and “Church vs. State” featuring K-Hill along with the aforementioned “Raw Factor 2.0.” The album describes it as a remix but it has virtually nothing to do with the original version of the song, nor the album it was named after. The other five flip these five in new ways, including “Ease My Mind” getting TWO alternate takes. The one that closes the album is nice, but the original is still the best.

Although it feels slightly unfair to address this point since we didn’t get to hear him mature as an artist over a 20 year span, jumping straight from 1994 to 2014 Omniscence without any intervening albums, there’s a definite style difference you can’t miss listening to both. Early Omniscence was a energetic pumped up battle rapper who was going for the throat with every bar, speeding along a track at a fast pace, trying to cram as many memorable punchlines down your ear canal in one song as possible. Present day Omniscence raps at a much more calm and deliberate pace, and lets give Debonair P credit for crafting beats to match his new flow. There’s still a charming gruffness to his vocal tone, but’s not about the clever snaps on songs like “Welcome” – it’s about “People on drugs with serious problems/Wannabe thugs, who didn’t use condoms/Doin what they want to whoever they want/whenever they want, thinkin that they’d never get caught.”

It’s not bad to hear an artist get more serious about his craft with the benefit of age and wisdom, but it’s definitely a jarring transition to go from the fast-paced and highly quotable O to the modern day “Mr. Slow Flow” without any warning on how much he had changed. I dare say Omniscence sounds world-weary and tired, like he’s been carrying the burdens of life after a failed major label career for 20 years, and now that he’s getting a chance at a comeback the passion he felt in his youth isn’t quite there. The closest he gets to that feeling is on “Letter to the Better” when he vows he can still “take a nigga to the shed/bring it to his ass like breakfast in bed” on the mic. It’s a sign of life, a heartbeat after a 20 year coma, but I want more from Omniscence and he’s got to want more from himself. Since this is more of a sampler of a project to come than a full album, it’s only right to say “I’m glad O is back” and then raise the bar higher for an album that won’t be 50% remixes next time out.