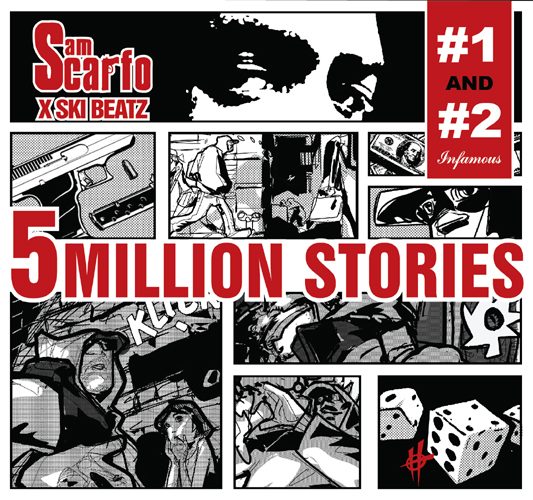 Honorable and culturally significant they may be, the mixtape and the battle circuit can also be dead ends for rappers with that Banksian Hunger for More. Sam Scarfo has done both, but decided the time has come to put out something official. Helping him with his decision were Prodigy of Mobb Deep and producer Ski Beatz. The latter, of “Reasonable Doubt” and “Uptown Saturday Night” fame, has kept himself steadily busy in recent years, collaborating with the likes of Curren$y, Smoke DZA and Stalley (even as Dame Dash’s plans with DD172 crumbled), and according to Scarfo the fact that these current spitters were seeking out a producer that hails from the era that influenced him, inspired him to hook up with Ski. Having been signed by Shawn Carter to Def Jam in 2005, there also has to be a load of older material around, so “5 Million Stories” is a double-package. His work with Ski is billed as “Vol. 2” and acts as his debut album, while “Vol. 1” collects previous recordings.

While it’s probably not identical with the shelved Def Jam debut, some of the features and producers on “Vol. 1” clearly had major label pull behind them. There’s also an interesting West Coast lean to the production with beats provided by Fredwreck, Bink!, Terrace Martin and Jelly Roll. Fredwreck scores two of the high points. “Jesus Loves You” is an unusual display of empathy where Scarfo regards both the innocent (the victims of Katrina, for instance) and the sinners (“Yeah even the snitches, I hate to admit it”), complemented by an on-point verse from Ghostface. “Didn’t Mama Tell Ya” is an astounding collaboration with Patti LaBelle (assisted by a group of children credited as the the ‘LA Boys Choir’). Speaking from his death bed, Scarfo delivers his last words and will to his mother while Mrs. LaBelle talks back to him in an affectionately scolding tone. Orchestrated in a classic way (both referring to gospel), “Didn’t Mama Tell Ya” and “Jesus Loves You” are two excellent songs that would have deserved a shot back when they were fresh. In fact they’re so timeless they are relevant here and now.

“Who Want It” did secure the New Jersey representative a slot on a retail release, 2006’s “Waist Deep” soundtrack. Veteran producer Bink! blesses him with a rumble-ready, piano-driven beat and Jamaican superstar Buju Banton provides additional belligerence. (Maybe he should have told Sam not to refer to himself as “soundboy”…) “Rider” is the most distinct West Coast production as Fredwreck engineers that graceful bounce he’s known for and the late great Nate Dogg delivers another one of his unimitable hooks. Yo Gotti wasn’t yet the factor he is now, and “Yay Slinger” is mainly a (musically competent, courtesy of J-3rrdy) nod to the south with lyrical repercussions such as Sam’s “I’m on my money / I’m on my money / I don’t think you understand how I’m on my money”…

Drug dealer testimonials are inevitable in this set-up. “Five Million Stories” is a dramatic tale whose interesting introduction (“Let’s take a trip to the heart of the ghetto / where them young boys sparkin’ the metal / where we find a young Sam Scar out dodgin’ the devil / with a outlaw vision and the heart of a rebel”) leads only to a gory ending. “Curbservin” delivers incriminatory details over a sneaky Ty Fyffe groove, “Mattress” features a retro-futuristic, equally cinematic beat by Clipsmoke with an infamous stash spot in a starring role. But they’re trumped by the towel-throwing “It’s Over,” a realistic look at an impending jail sentence that brings back the seasoned Sam Scarfo: “This for my no-good niggas and my no-good bitches / That karma’ll give ya ass a whippin’.”

Sam Scarfo’s would-be debut, at least the way it’s presented in “5 Million Stories Vol. 1,” is one that values art over success. Sam dared to make his own decisions, it seems, enlisting EZ Elpee for the emotional “Renegade” or Ne-Yo for the straight sentimental finale “Dreams.” Or teaming up with Sha Stimuli and Supastar Straps for the lyrical workout “S on My Chest” (propelled by a snug-fitting 50 Cent sample). The only seemingly stereotypical R&B joint, “Purple Haze,” does have a female part but the good time they have is guaranteed by Mary Jane. We know he could have gone another route.

Obviously he’s cut from a certain cloth. If you’ve been around in the last decade, you know his kind. You recognize the sometimes forcedly physical delivery, the strained melodical flows, the husky voice. The posturing. The claims. The desire to align himself with the greats (“Sound like I’m from back then / Yeah – that’s him,” he alludes on “Who Want It”). Despite the emergence of Kanye West, far into the first decade of the new millennium the most promising role for emerging rappers hoping to break into the mainstream was that of the gangster/hustler. “5 Million Stories Vol. 1” demonstrates this in detail. The problem, especially for East Coast hopefuls, was that 50 Cent’s larger-than-life silhouette invariably loomed over them. The prospective Def Jam star went for the same laconic gangsta rap G-Unit perfected but ultimately lacked the (vocal and lyrical) personality of emblematic figures like Cam’ron, Jadakiss, Fabolous, Black Rob, or the Gorilla Unit or the Terror Squad. His material was musically more eventful than lyrically.

Since then we’ve seen our share of New York full-lengths that sounded all the way like “Yay Slinger.” The time may not be ready for a turnover and Sam Scarfo may not possess the star power of the aforementioned, but “5 Million Stories” is a welcome return to a perhaps more lasting sound. In terms of Sam Scar’s image, there hasn’t been too much retooling. If anything, the chip on his shoulder got bigger. He renews his ties to the underworld on several of the new Ski tracks. “Fishscale,” “Kitchen Musik,” “911” are all made up of stylistic drug rapping for its own sake. Whether he’s flexing muscles (“Extortion”) or money (“In My Lifetime”), he does so against the backdrop of the drug game.

What sets him apart from the pack on “Vol. 1” is the absence of that sarcastic/nihilistic attitude of his peers, and while that difference is less apparent on “Vol. 2,” he’s still good for a cautionary song or two, even when they hide behind misleading titles and hooks (“Murder”). “It’s Yours” though is a simple “The World Is Yours”/”If I Ruled the World” combination that aims straight for your heart. “One More Step” is more sophisticated, a snapshot on the ladder of success with wise words for those with a little bit more steps to climb:

“Nine years of your bunkie snorin’
Now you gonna see parole in the mornin’
Don’t be that braided-up life-wasn’t-fair fuck
Get you a schoolboy haircut
Cause your son buggin’, your daughter need you
And she surrounded by all the evils
So straighten up, soldier, pull your pants up
Get in these Balmains and get ’em tanned up
For my addicts, pleadin’ their 11th step
We got some more celebration left
Just think about just a little wildin’
Please think about when you was at the bottom
Cause last thing I wanna do to y’all is prove it to you
Yeah I’m rich but I’m rootin’ for you”

Ski Beatz is as reliable as ever, even as he himself ever so often relies on existing formulas – “Fishscale” might just as well host M.O.P. or, yes, Ghostface; “911” featuring Prodigy is a dead-on Alchemist impression; “Kitchen Musik” and “Get High” featuring Smoke DZA are typically lush orchestrations for raps filled with intoxicating ingredients.

Sam Scarfo didn’t see the need to reinvent himself in Saigon or Curren$y fashion. There should still be a place for him, especially since he completes another step with the release of “5 Million Stories.” He still has some way to go to reach the upper echelon of rap but he’s on the right track. There’s no progress without effort, nobody knows that better than this kind of rapper.

He’ll tell you from a self-centered point of view:

But he’ll leave the same option open to you:

“Thought you was made to lose
Now you makin’ moves
You feel like a boss, out here enforcin’ rules”