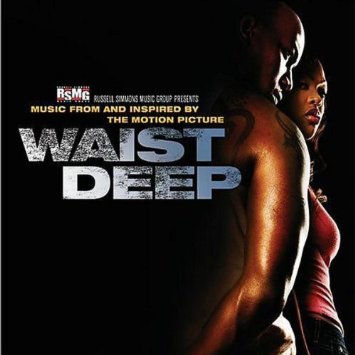 O2 has a son named Junior. Junior gets kidnapped by a gangster named Meat. O2 and his girlfriend Coco have to hustle and rob to pay the ransom so he can get his son back. Drama ensues.

For the benefit of the moviegoing public I’ve just summed up the plot of the movie “Waist Deep” in 40 words or less. Sadly reviewing the hip-hop soundtrack that goes with this film will take a lot longer. It’s worth nothing that even though The Game makes his feature film debut playing the part of Meat (and could they have given his character a WORSEname) he’s nowhere to be found on this CD. Quite frankly I would have settled for a second string Black Wall Street rapper like Lil’ Damu or Ya Boy getting a track so long as The Game had a verse on it to make it official but they didn’t even do that. It’s odd really – you get so used to rappers using their connections and nepotism to get ahead that you only notice it when they DON’T for no apparent reason. One rapper who does get by solely on his familial name though is Lil’ Eazy-E, a legitimate son of the late Eric Wright. I didn’t say THE legitimate son because Lord knows how many progeny Wright left in the world before he died – he was one promiscuous muh’fucker. Here’s what Lil’ E had to say on “This Ain’t a Game” featuring Bone Thugs-N-Harmony:

“Lil’ Eazy, young G in the C-P-T
West coast ’til the casket drop
Eastside block and I got that ki’ – straight gangsta
I’m just tryin to see
Who the fuck these hoes tryin to be
In the hood it’s understood – don’t fuck around with Eazy-E
You cross him, it’s mayhem; you owe him, just pay him
Anything else you askin for a nigga untimely passin
But it’s all to the good, in hood brings the wood
Like we should, all night long, on this Compton shit with Bone”

Vocally he sounds nothing like his dad, but it’s hard to imagine anyone ever duplicating that one-of-a-king high pitched voice anyway. He’s more like a thugged out version of Bow Wow from back in his Lil’ days, old enough to let his nuts hang but probably young enough to not legally order a drink at the bar. Time will tell if a name like Lil’ Eazy-E will be a hindrance or a help to his career, and whether or not he can get beyond these somewhat simplistic lyrics and evolve as a rhyme writer. The same can be said of Yung Joc, who showed a lot of charisma and world of potential on his “New Joc City” debut but often buried himself to the neck up in tired dope selling gangster rap cliches. Unfortunately the song included here from that debut CD is just such a track, entitled “Do Ya Bad”:

“Yeah; I’ll sell you wet dope just to make it weigh right
Call them boys, set you up in broad daylight
Yeah I’ll bang your bitch (your broad) I’ll do you bad
Nine months later, now she screamin you’re the dad
If you lose your bump, say I never found the shit
If I owe ya guap’, pay your ass with counterfeit
Oh yea I’ll flex ya nigga (flex ya nigga) don’t think I cain’t
(Don’t think I cain’t) Have my broad put some suger in your gas tank
Cut your brake line (line) slash your back tire (tire)
When you crank your car (car) your engine catch fire”

In fact there’s a substantial problem with “Waist Deep” in general due to the fact that all of the songs from established artists already appeared on their own shit first. Ice Cube’s “Child Support” was on “Laugh Now, Cry Later,” Ghostface’s “Be Easy” was on “Fishscale,” and I’m 100% sure I heard Redman’s “Gilla House Check” on XM Radio’s 66 Raw months ago, so it’s undoubtedly out there on a bootleg Redman mixtape. It’s still a good song though:

“Pull up a Coupe a color niggaz can’t find
Plasma TV on the mirror outside
I overdo it strong, got chicks that buck ya down
from Vietnam that look like Nia Long
[…]
You funny, I flood the area tsunami
Wash out the weak niggaz, then I tag ’em _Dry Me_
I’m married to the game, the brass my music
When Brick’s in the house, there’s a problem Houston!
I guzzle Crunk Juice to the neck
So when I walk in the party ain’t nobody gon’ do shurrr”

Hip-Hop needs more Reggie Noble these days – he’s still one of the funniest rappers in the game and it’s been WAY too damn long since he dropped “Malpractice.” What’s even more telling than the fact the big name artists already released their songs before this soundtrack came out is that their recycled music sounds better than the brand new songs by everybody else. I couldn’t care less about Dro, Boe Skagz or Tay Nati on “Guttaville” – not only can I not tell which is which, but on the basis of their names alone they come across like extras from this movie. (Meat. I still can’t believe the best name that they had for The Game in his feature film debut was MEAT.) I know Sam Scarfo is supposed to be the next big thing, but putting him on a track with Buju Banton pretty much ensured I wouldn’t give a fuck and skip over it. I had no interest in Dro’s solo track “Shit on Me” either, other than for the ironically appropriate title. I take it this isn’t the same Dro as the one rapping with T.I. on “Shoulder Lean,” because he ain’t nowhere near as good – either that or this song really SUCKS. Do you care about Young S. Dub, D.O.G. or Black Buddafly? I don’t. In fact the only good thing about the latter’s “Bad Girl” is the fact that Fabolous has a cameo on it:

“And I’m a bad boy like Martin and Will
Show you what you been missin, like the kids on a carton of milk
Hey, I can snatch somethin bad out of the hood
And bring ’em back to the pad out by the woods
You know the crew bring the bad out of the good
And I’m usually not layin in the boozy spots
Girl we can blow quicker than uzi shots
Chill where the Cristal’s cold, jacuzzi’s hot, ya feel?”

I guess F-A-B didn’t get the memo that rappers aren’t supposed to show love to Cristal any more. It’s okay though, this is a throwaway verse for a throwaway generic female singer on a throwaway R&B track on a throwaway soundtrack. As is far too often the case with soundtracks to urban films, “Waist Deep” comes across as a compilation album that tries to entice you in with a few big names just so you’ll listen to the unknowns the record label who released it had signed to their roster. It’s the easiest way to push their careers with the least amount of actual effort, and you will probably never hear from 2/3rds of them again. Closing with Nate Dogg’s “Dolla Dolla Bill” was a nice touch, but it’s like serving you a shrimp cocktail after a greasy 99 cent cheeseburger – class that feels totally out of context. I can’t strongly recommend “Waist Deep,” particularly since the best songs on here are available elsewhere. I can’t even tell you to score this one if you find it used cheap. You should probably just pass on it.