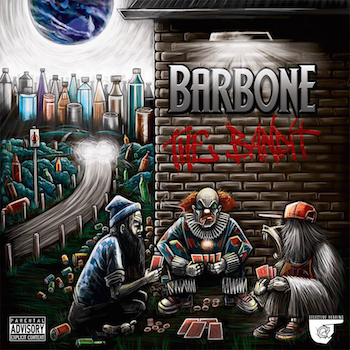 Author’s note – I seem to have picked the right week to review angry rappers. As I was going through my stack of albums left from 2014 to finish in January 2015, I came across Penny the Greats’s “You Can All Die Now” and Barbone’s “The Bandit.” Any other week Penny would have won the unofficial “Angriest Rapper of the Week” award, but compared to Barbone he really can’t win – Barbone is as anti-commercial as they get and “if you ain’t down with real rap, eat a d#%!!”

The most appealing part of the Melbourne emcee may be his seething rage, which boils over in both entertaining and slightly disturbing ways right from the first official track (skipping the intro) “Good Morning.” Barbone raps like he’s been on a bender and just had a chunder, sobering him up long enough to angrily growl his lyrics through acid washed vocal cords. A word to the wise though – Barbone is unrepentantly homophobic less than than a half minute into the song, because when he questions “following fags” he’s not talking about chasing his whiskey with a cigarette. If it were an isolated moment I wouldn’t find fit to mention it, but in the next verse he blasts “queers” who act “hard cunt” and need a “pap smear.”

It’s discernible that Barbone is just trying to tear down rappers who he feels are inferior peers, as opposed to standing outside the Oyster Club with a baseball bat waiting to bust heads, but it’s pretty clear that his favorite diss is going to cause some listeners to feel unease. At the same time Barbone would probably not give a damn about losing those listeners, because he revels in the unbridled display of machismo of tracks like “Peep This,” saying that those who don’t learn “will get opened like a motherf#%ing C-section.” Julio produces a thumping piano beat the back it up, then loops in samples of Lord Finesse, Redman, Krazy Drayz and O.C. to give it that extra oomph.

It’s also fair to note that by Barbone’s own admission, “some tracks are as old as seven years,” so some of the sentiments he shares on the album may have been toned down with time and maturity. I’m not sure he’d be nearly as compelling a rap figure though if it weren’t for his wrath, as experimentally sci-fi tracks like “Caught Between Worlds (Day 3)” are intriguing but don’t really seem to fit his flow. It’s songs like the Methodz (R.I.P.) produced “Virgil’s Web” that suit him best – turning Barbone into Australia’s version of Vinnie Paz, where even he admits “I can’t control my anger or vocab” and that it has cost him dearly when “all I really wanted was to reach the masses.” Barbone might be less palatable if he weren’t so self-aware, but since he possesses the above-average beat selection of most Australian exports and understands his own gimmick well it’s a compelling if occasionally disturbing journey worth the trip.