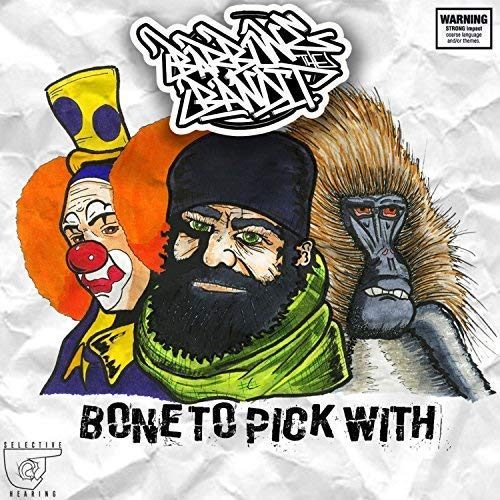 Barbone the Bandit :: Bone to Pick With

Barbone the Bandit’s latest album, “Bone To Pick With”, isn’t merely just a play on his stage name. It’s a statement about the nature of the album itself, which includes several songs focusing on topics that he feels need to be talked out. Though the Melbourne emcee has been on his hip-hop grind for a decade, I have to admit that the Hilltop Hoods are the only Australian group I was familiar with until now. Though not without flaws, “Bone To Pick With” is a sample-heavy adherence to the traditions of boom-bap.

The use of sampled dialogue from TV shows and movies is copious without being a crutch, and this is evident on the first track, “Kid In The Corner”. The song also makes use of vocal scratches courtesy of Melbourne-based DJ Rellik and a familiar sample as the backbone for the beat, which oozes boom-bap. “Mondane” is the first official topical song of the album. Produced by Scotopic, the song is a lyrical picture about the boring quotidian grind of a repetitive job. It definitely has a working class feel to the music that practically screams, “I HATE my job!”. Of all of the producers for the album, PizOne provides the most interesting beats. Starting with “Infected”, PizOne melds a looped piano sample with some trash can snares for Barbone’s laziness-themed lyrics.

Among the tracks that didn’t do much for me on the whole musically, the one that ironically stands out is “Know the Face”. Even with its melodic xylophone sample and Barbone’s flow, it still didn’t fully grasp my attention for some reason. The celebration of idiosyncrasies that is the PizOne-produced “Weirdo” is dope, but it’s the following track, “Time’s Up”, that’s very interesting. Built around some dark piano chords, Barbone uses troglodytes as a metaphor for ignorant behavior. He takes the topical rhymes further on “The Cubing”. Bearing similar themes to “The Instrumental” by Lupe Fiasco, the song’s a crash course example of social-learning theory for any communications/mass media major. Produced by PizOne, Barbone provides a narration about the dangers of generalizing what one sees on television.

Barbone has stated that anything beyond 12 tracks on an album is too much, which would explain the scarcity of guest appearances on this album. Fellow Melbourne hip-hop artist Skwid Fingaz makes an appearance on “Vexed”. Considering he has a guest verse, produced the track, and provided the scratches, “an appearance” doesn’t seem to be the right term that encapsulates his contributions to the song. “Meteorite” features some good production by PizOne, “Peterson Turf Street Derelicts” (produced by New Jersey beatsmith Ill Tal) is narrative tale about wasted teenage youth, and the album ends with “Virgil’s Exit (Overdue)”. A smooth musical introspection, but it contains plenty of boom-bap elements:

The fact that “Bone To Pick With” is rooted in boom-bap reflects the extent to which traditionalist hip-hop stances are followed by international rap artists. European acts like the Snowgoons and S.A.S., for example, both have a sense of style in their respective lyrics and production approaches that shows a devotion to one of hip-hop’s renaissance eras. Straight from Australia’s second-largest city, Barbone the Bandit is no different. He brings a gruff panache to this album that’s balanced by equally gruff beats and acknowledgement of what needs to be preserved in hip-hop.