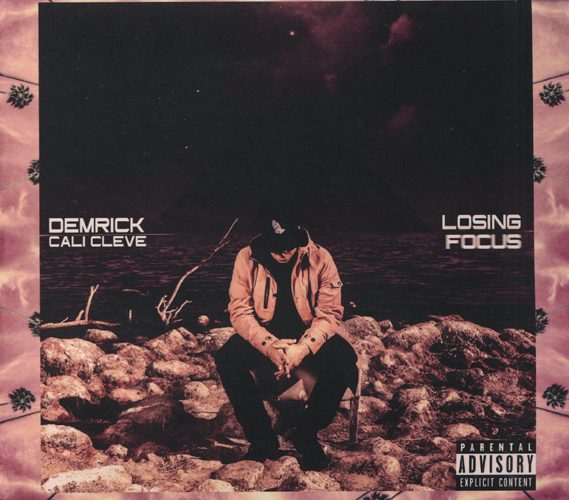 If the name seems familiar and you’re having trouble placing it here’s a hint – Demrick (a/k/a Young De) was one third of the supergroup Serial Killers along with B-Real (Cypress Hill) and Xzibit. You might have expected a West coast affiliated, Los Angeles based artist like that to sign with an imprint from the area, but in a surprising power play Madchild swooped in and made him a part of the Battle Axe Records roster. Not surprisingly his first tour to support the release of “Losing Focus” took him all over Canada through the month of January (which is my idea of torture – touring the frozen North in the coldest month of the entire year) before returning to the friendly confines of the U.S. for the official drop date.

Who exactly is Demrick though? To hear him tell it in the press release accompanying the album, “I wanted to give my fans a look into how I live. If you watch close, you will see me light up a large amount of joints.” It’s certainly not surprising that B-Real or Xzibit considered him a kindred spirit, and if getting smoked out is what you’re all about, you’re definitely going to be into “She Changed.” She who? Mary Jane. According to Demrick:

“One thing’s for sure, she ain’t the same as before
Got a hundred different strains, different names at the store
Looking at a bag of chronic’s like a sour dinosaur
Leave that outside at the door, we don’t smoke that s#%@ no more
I need that OG kush, that’s the b@%!$ I’m looking for
She’s that redheaded whore, with the high that I adore
She got them expensive tastes I know that most can’t afford
But she’ll take you on a trip, take a hit, come aboard”

Of course Mary isn’t the only way Demrick wants to get high – on “Skyscraper” featuring King Chip and Logic he also wants to LIVE on that “skyscraper paper” with “a swimming pool in my backyard.” He admits “he’s a thousandaire trying to get there” but the aspirational rap shows Demrick has the desire to be staying high in the air in that luxury penthouse.

Demrick may be known for the company he’s kept, but “Losing Focus” doesn’t lose his focus musically, as the guest appearances on the nearly hour long album are kept to a minimum. Dizzy Wright from Funk Volume is a welcome inclusion on “We Still Here” and “Darkness Falls” reunites him with B-Real and Xzibit over a gothic track that (perhaps apt for a supergroup) seems suitable for Slaughterhouse to flow over. Other than that though this is Demrick’s album, produced entirely by Cali Cleve, who always seems to find the mood that De is looking for. Whether he’s posted out on “Space Island” taking “blunts to the face” or getting a little tuned up to sing on the futuristic “Gleamin,” he’s the man with the right flow and right producer.

The $64,000 question to be asked is just how far Demrick can go as the latest rapper to unabashedly espouse his love of kush on the majority of his songs. To be sure it’s worked out well for Wiz Khalifa over the years, but it has also led RR staffers to brand Wiz as making (quoting here) “safe and formulaic rap album(s).” Is that really a label Demrick wants to be stuck with? He’s working with good people, he’s not unpleasant vocally or lyrically, but I keep looking for more depth and smacking into tracks called “Pass the Blunt.” I’m pro-legalization but I’m also pro-conversation, and even on a Cypress Hill album I felt like there was a story to the glory of the real estate. B-Real and Sen Dog put their whole life on wax, their adventures both stoned and sober, their run-ins with both the law and their rivals. Demrick doesn’t seem to have any drama in his life though – perhaps he needs to be a little more compelling as a soloist. It’s easier to disguise yourself as one-third of a trio if you don’t have much to say, but the relatively inoffensive Demrick does manage to bother me a little by having such a singular note he rarely deviates from.