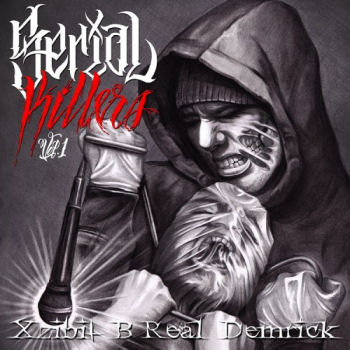 Xzibit has certainly returned to hip hop with an added intensity since presenting Pimp My Ride with that affable smile of his. 2012’s “Napalm” was an example of this extreme approach to X’s brand of west coast hip hop, and I actually saw him perform in 2011 with some of this more lyrical material. Xzibit took a short break, but was always around. He may not be tearing up the charts with Dr Dre’s backing any more, yet there’s nobody quite like him. His gruff vocals are always pleasingly brutal, cutting through any beat with a precise edge. There had been a few songs with his protÃ©gÃ© Young De circulating Youtube for a while that were unerringly hardcore, somewhat refreshing considering how successful his presenting of Pimp My Ride had been. Serial Killers sees Xzibit and Young De (now calling himself Demrick) collaborate with Cypress Hill’s B-Real for an unerringly hard mixtape full of gun-slinging, arm swinging gangsta rap.

Xzibit and B-Real must be in a strong financial situation, and clearly continue making music for the pleasure of recording, touring and maintaining their brands. Young De has shown that he is more than capable of rapping (and singing) about the lifestyle and background of gangs in Los Angeles, but Serial Killers is actually a mix of the intimidating gangsta rap you’d hear from Nipsey Hussle or elder statesmen WC and Daz, but throws in a darker tone that lends this mixtape a horrorcore edge not too dissimilar to early Gravediggaz. This is best represented by the artwork that accompanies this album (I can’t really refer to this as a mixtape, as it’s digital and not mixed!) whereby a poor lad is being strangled by a microphone cord.

Free mixtapes have been very much ‘in-fashion’ of late, and given the high quality of projects like “Blue Chips 2” from Action Bronson and “Pimpire Strikes Back” by Roc Marciano, rap fans now EXPECT free music to be of a certain quality. There is most certainly a ‘quality’ emanating from each song, with a blockbuster feeling right from the first track “First 48.” The video for this track is full of gore and intense visuals, but this isn’t a constant theme throughout the actual record. This is probably as ‘nice’ as murder and violence has ever sounded, thanks in part to the heavyweight production from the likes of Statik Selektah, Nottz, DJ Khalil and Futuristiks. Yet it is underground fire-spitter Ill Bill who snatches up three slots: “In The Sky”, “Six Billion Ways” and “No Comin’ Back.”

The latter two tracks show Bill’s traditionally East Coast style work for West Coast artists just as well, with “No Comin’ Back” benefitting from an effervescent Young De hook. A rare, sombre moment comes in the form of “In The Sky”, but it’s the harder tracks that showcase why Serial Killers is a winning combination. Ill Bill throws up a bass bonanza on “Six Billion Ways”, showing incredible versatility and just how underrated his production is, yet Xzibit, B-Real and De turn this gem in to one of the album’s best tracks. It’s not often you hear three emcees all capable of killing a hook, and none come better than “Worst Nightmare” – a much better listen than the name suggests. “Doctor’s In” sees Hopsin jump in on the horror stories (in place of Xzibit), with claims of taking selfies with dead bodies adding much-needed light relief.

Naming this project “Volume 1” means hopefully there will be future instalments in this promising trio’s guise as Serial Killers. Young De doesn’t slip in to the background which had me worried, given how unique B-Real and Xzibit’s presences are – they are song-stealing characters and De more than holds his own. If this was released ten years ago, it would have been a strong piece of hip hop I’d happily pay for, as I have done with B-Real and Xzibit’s previous albums. Given that this is free, there’s NO reason not to listen to this, let’s hope there’s more to come.