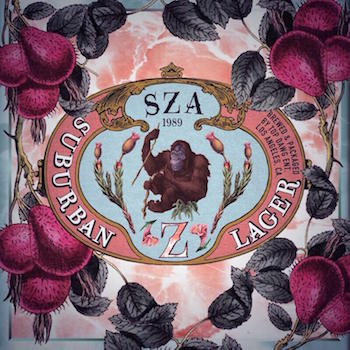 The last few years have seen a number of R&B singers making music that veers off of the Hot 97 path. For a long time this alternative R&B was tagged neo-soul, a label that is still used. However, what sets apart artists like Solange and The Weeknd is the way they mix indie rock and indie pop elements into their sound. SZA is the latest artist in this mold. She’s signed to Top Dawg Entertainment, home of Black Hippy members Kendrick Lamar and Schoolboy Q. She offers a take on R&B that is as unique as those rappers’ take on hip-hop. “Z” is her third and most recent EP.

If there’s one word that can be used to describe “Z” it is dreamy. The album unfolds in a haze, with SZA sleepily whispering her lines. There’s a sense of both nostalgia and malaise on the album. She’s dealing with lost love, betrayal, faith, and feeling confused and insecure. “I don’t recall the last time I took advice from anyone,” she sings on “Babylon”:

The artist that came to mind most to me when I was listening to “Z” was Bjork. SZA isn’t quite as esoteric as the Icelandic singer, but she does work with a range of sounds and producers. Larry Fisherman, Toro Y Moi, Emile Haynie, DJ Dahi, XXYYXX, and Felix Snow all produce tracks. SZA works best with the fractured trip hop/chillwave on tracks like “UR,” “Child’s Play,” and “Warm Winds.” “Sweet November,” which samples Marvin Gaye’s “Mandota” is another standout track, with some of her most memorable lyrics:

It’s only when SZA tries to get more conventional that she lost my interest. She goes off on in a dramatic dance-pop direction on “Green Mile,” “Shattered Ring” and “Omega.” It’s a sound that’s earned Charli XCX millions of dollars and a Carl’s Jr. commercial, but doesn’t do much for me and doesn’t serve her voice as well as the trippier songs do.

SZA has a gorgeous voice, something unique to say, and a knack for choosing producers. “Z” has all the romance, longing and heartache of young love, and is an ideal soundtrack for nursing any post Valentine’s Day wounds.