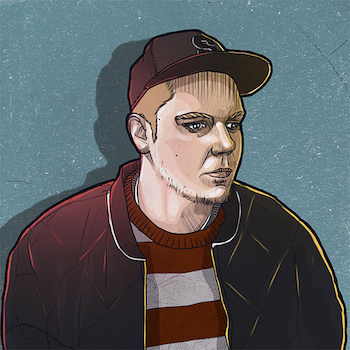 Whether you know Red Pill from his work with Hir-O or as part of Ugly Heroes alongside Mello Music Group label mates Apollo Brown and Verbal Kent, know that the next 2-3 years are going to be big for him. Mello Music Group have now established themselves as the de facto Hip Hop record label for quality albums. Last year alone saw Diamond District, The 1978ers, Open Mike Eagle and Ras Kass release noteworthy contributions to many a Best Albums of 2014 list. With MMG now announcing that Red Pill has signed a multi-album deal with them, Pill has released a free EP with three songs to show a glimpse of what’s to come.

The EP is called “Learning to Punch”, seeing as Red Pill readies himself to box with the heavy hitters on the label, it should be known that Pill is an emcee that already connects with his audience. One line that Pill used on Ugly Heroes’ self-titled EP last year summarized his style perfectly: “Brother Ali if he ate sausage”. If you enjoy Brother Ali, you’ll enjoy Red Pill. If you find Brother Ali to be preachy, then you’ll prefer Red Pill. He is equally blunt with his rhymes, but doesn’t possess the overbearing religious message that Ali sometimes suffers from. That’s not to say Red Pill is better than Brother Ali, but an alternative who is a different enough artist that quick comparisons may overlook. All things considered, I enjoy Red Pill’s work for the same reasons I enjoy Brother Ali’s blunt honesty.

“Learning to Punch” utilizes production from Duke Westlake (“One Day”), Apollo Brown (“All of Us”) and Oddisee (“Smile”). “Smile” is a self-appreciative track from Pill as he reflects on his upbringing, where he is thankful for having enough to get by. Pill’s verses hit home (literally) and showcase how he can utilize his voice melodically on hooks, which isn’t the greatest but does what it needs to tie the verses together. The fact that Oddisee laced him with a cracking instrumental only makes this EP all the more essential. Pill then talks about his own white privilege on “All Of Us”, while also highlighting that everybody wants to grow together. The best of the three songs is “One Day” though, with Pill flowing over a quicker, snare-heavy production from Duke Westlake.

It’s not often you hear an emcee proudly state that he is an atheist (or “believing in nothing”) but admits that he wants to believe in something. It’s something I and many others in their 20s can associate with being lost spiritually. A generation in debt, raised on television and Internet where most of the news being broadcast is of doom and gloom, who can blame us? Of course, Red Pill isn’t the happiest chap and this trio of tracks is a good snapshot of what he’ll provide in the future. He always sounds focussed and it feels like he has something interesting to say each time I hear him, so the Mello Music Group deal excites me, and I’m sure many others. Three songs may not really warrant a review as such, but considering it won’t set you back a penny, you’ve nothing to lose grabbing this off of Bandcamp.