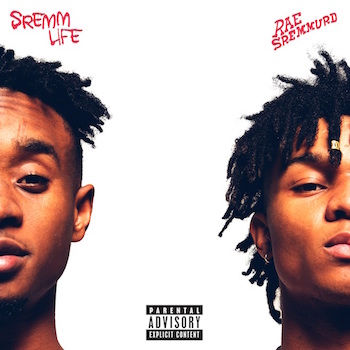 The first release of 2015 has been going around my head for a couple of months now. Rae Sremmurd – that’s ‘Ear Drummers’ spelt backwards (except it’s actually ‘Drummers Ear’ surely) are seemingly a couple of mental young brothers who like falling off skateboards, jumping off balconies and making ridiculous music for their peer group… Whilst I can’t quite imagine Pusha T and Malice putting out coke-dealing Vines were they to have debuted in 2015, the world is a different place now. The key to their official 2002 debut “Lord Willin'” and to these young whippersnappers’ first offering “SremmLife” is letting a brilliant producer Exec the shit out of your album. It just works.

Whether it was The Neptunes then or Mike WiLL Made-It now, it pays to be under the tutelage of someone truly talented, a producer with the ability to lend you their vision. That’s not to diminish the talent of the artists themselves, but at such a young age, it’s a wise decision to outsource the management of a great album in order to focus on the creation and performance. And to my mind, “SremmLife” damn near approaches greatness.

This is a merging of hip hop and R&B, very much in the way that Future has done so to such great effect. But it also reflects Rae Sremmurd’s age, their youthful exuberance. When you’ve got barnstorming beats blended with concert-level choruses – the first three songs alone crush the competition within about 14 minutes – then you know you’re listening to a unique talent. It sounds like everything currently getting trashed by the self-proclaimed “gatekeepers” of hip hop: loud, lashings of vocal effects, simplistic flow patterns, repetitive, obnoxious, misspelt, not “trapped in the 90s” etc. The three main strengths: rock solid instrumentals; infuriatingly catchy choruses; and fantastic melodies (even if you don’t quite know what they are saying/mumbling). For my money, the biggest single off the LP – “No Type” – is possibly the least effective song of the entire 45 minutes.

Opener “Lit Like Bic” is indelible, with a busy beat laying the foundation for Swae Lee and Slim Jimmy to go over. “Unlock the Swag” is a true monster, the kind of track Rick Ross would probably kill for right now (and when Kendrick Lamar starts tweeting “Unlock duh Shwag, Shwaa Unlock” you know shit’s gone viral). “No Flex Zone” is a masterclass is chorus creation, with everyone making unofficial remixes – and it caps off the perfect opening salvo.

There are multiple other highlights throughout “SremmLife” such as the bizarre “Julia Stiles dancing to Biggie” of “Come Get Her”; “My X” has a brutal rawness, a slow-burning version “I Don’t Fuck With You”; Big Sean himself pops up on “YNO” which is pure dopeness; “This Could Be Us” should hit the target as a smoother female-friendly track, although it’s a shame that Nicki Minaj is only restricted to a sparse hook on “Throw Sum Mo”. Even the goofy closer “Safe Sex, Pay Checks” somehow works, and you realize that everyone must have been firmly in the zone throughout the creation of this album.

2015 has already been a very interesting year for hip hop – in the first 10 weeks, there have probably been more quality releases than in the entirety of 2014. “SremmLife” definitely lives up to the hype – yes, it’s more focused towards the youth market, but it shouldn’t preclude anyone reading this who enjoys the youthful energy of debut artists going nuts once they get a big chance. On the remix to “No Flex Zone”, there was a wonderful symmetry as Pusha T turns up and smashes it – it’s a shame (No) Malice wasn’t there as the Brothers Thornton passing the baton to another couple of siblings could have been even better.

As it is Rae Sremmurd clearly have a bright future if they can keep this kind of form up. I’d argue that the release should have been timed for the summer, because as soon as the sun comes out, this will be my weapon of choice for playing obnoxiously loudly in my car. Pusha once said in an interview on a British radio station that not all music has to “save the world” – and that couldn’t be any more appropriate for “SremmLife”.