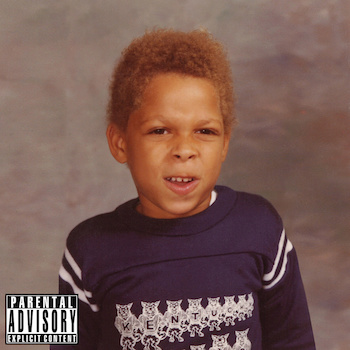 Kentucky emcee and QN5 Music affiliate Sheisty Khrist has been long overdue for his own solo album. I had previously heard him with fellow KY rappers CunninLynguists on their group and solo albums and noticed his penchant for clever rhymes and effortless multi’s. Always a thinking man’s emcee, I figured that when “Cold Winter” dropped, that it would have a particular concept tying the tracks together. There’s also a certain wit in enlisting Kentuckian artist LoFidel to produce the album: As stated in the album’s press release, the album was recorded in low-fidelity analog format. But let me get this out of the way before giving my thoughts on the music: The first biggest attention-grabber for the album isn’t the sound, it’s the album cover. It features an old portrait of Sheisty as an elementary school student and his hilarious facial expression looks like he’s having a bowel movement, either constipated or the runs.

Conceptually, the album’s title isn’t a reference to the weather, but a critique on humanity’s continuously frosty disposition. In fact, the only songs with titles that are in-tune with that of the album are the title-track, “Frigid” and “Ice Capades”. LoFidel’s production is sample-based and utilizes plenty of classic rock and soul music from the 1970’s as source material. To add to the artistry, he made the sound a throwback to the pre-digital era, when everything was recorded via analog. They very intent of the music is so that it sounds like it came from a cassette tape, something only people ranging from ages in their mid-twenties to beyond my own would remember having to use. Interestingly enough, the analog theme was also included as part of its physical media: Upon purchase of the CD, I was sent an additional audio cassette, as well.

The cassette sound is evident on the album’s title-track which serves as its opener. Over a sampled vinyl-crackling backdrop of loud, clanging analog guitars, Sheisty waxes about how the microcosm of street life is indeed cold with random disregard for anyone or anything. The theme is continued on “Ice Capades”, backed with a fast-paced interpretation of Free’s “Fire and Water”. Though noticeably short, “Frigid” has a darker sound with a narrative about armed robbery in a cold world.

Despite the nature of the album’s recording “Jewelry” is perhaps the most polished track. Utilizing a horn sample loop and a live piano, it’s also the longest track (closing in at a little over six minutes). It flips the “ice” and “cold” puns into a lyrical treatise on man’s greed and lust for jewelry as status symbols, wealth, upward mobility, et al. With some hook and verse contributions from Emtre Hollis and Rob Jackson, Sheisty gives us his version of BDP’s “Love’s Gonna Get’cha (Material Love)”. The album has a glimmer of optimism with “Running”, with the Sheisty imploring that “you gotta keep runnin’, but you can’t keep runnin'”.

A few of the complaints I have about the album is the length of certain tracks. “Frigid”, “Save You”, and “40 oz. Guzzlin” are all over a minute long, but less than two. All have melodic lo-fi productions but have only one verse each from Sheisty. To be honest, I wanted more of him lyrically on those tracks. Another thing is the prevalent “inner city blues” theme. It does get to be redundant, even when lyrically re-packaged. But luckily, Sheisty and Fidel hold my attention enough to curb my index finger’s impulse to begin skipping tracks.

Of the album’s guest features, spoken-word artist Bianca Spriggs makes an appearance along with Natti and Deacon the Villain from CunninLynguists. Natti spits a verse on “Havana Nights” while Deacon recites the best verse on the drug-indictment track “Adderall”. It’s worth noting that this track wouldn’t sound out of place on Deacon’s and Sheisty’s 2010 collaborative album “Niggaz With Latitude”. The album’s closer “Control” has a spacy soundscape built from a David Bowie sample with thumping drum snares and has Shiesty closing out his own story.

Using analog recording equipment to make this album was certainly unique. As was the approach used to convey the myriad connotations of the term “cold winter”. But it’s such frigid conditions in contemporary hip-hop that make it a necessity to bring that heat.