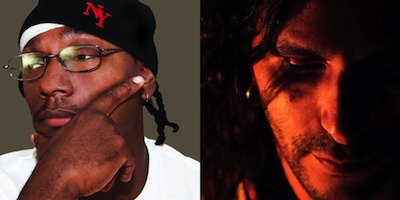 “Just because it’s called a (specific) genre doesn’t mean it can’t blend, (it doesn’t mean) that genres can’t be merged together and not be called a mash-up.”

These are the words of NYC emcee T.O.N.E.-z, who feels there should be no limits put on music. “There’s no reason why Taylor Swift can’t sing a hip-hop hook,” he continued, “if it sounds good, it sounds good.”

With a history of marrying disparate genres, T.O.N.E.-z is no stranger to thinking outside the box, and his latest effort is a collaborative one with LA-based producer Rorschack. Their EP Handcuffs was just released on Bay Area electronic music label MalLabel music, and RapReviews caught up with both T.O.N.E.-z and Rorschack to find out more about the project, and why hip-hop and EDM aren’t as strange bedfellows as one might think.

Adam Bernard: What initially attracted you to each other’s music, and gave you the idea that teaming up for an EP would work?

T.O.N.E.-z: It was a friend of mine out in Virginia, his name is Erman. I was out in Virginia taking care of business, and he told me about a young lady named Amanda (Abizaid). She’s the one who did the theme song for a TV show called The 4400. I linked up with her because I was like, “Hey, I’m a big fan of the song, a big fan of the show.” She happened to be working with Rorschack on a song, and I actually did a verse on that.

Rorschack: I was looking for a rapper to add to that specific track, and (Amanda) offered to introduce me to T.O.N.E.-z. He liked the track, and he recorded it on the spot. It was great. Me and T.O.N.E.-z, we’ve stuck together since then. I played him my music and he just loved it. He started spitting, recording stuff back. That was pretty much it.

We have a really strong connection. We have that old school musical vibe (you get) when you create music together. That’s the vibe that I was always looking for in collaborations, throughout my whole career, that specific juice that you get when you connect with a musician that is on your level, and you feel each other, you get each other. That’s what gives it the secret ingredient.

AB: The EP Handcuffs is on MalLabel Music, which is an electronic music label. We tend to think of hip-hop, and electronic music, as two radically different genres, but what aspects of them have you found to be similar?

R: I think these days the differences between EDM and hip-hop are really thinning out. If you look at most mainstream artists like Drake, and Nicki Minaj, most of their music is based off of 808 kits, and very electronic production, so I don’t think EDM and hip-hop are so different these days.

Maybe there’s a little bit more of an EDM touch to my work than necessarily to any hip-hop producer, per say, but that’s just my own interpretation of things, it’s my own music. His lyrics come on top like a jockey on a horse. The music is the horse, he’s the jockey, and he just makes it run.

T: I’m a firm believer in mixing up genres. I’ve done bluegrass and hip-hop, acoustic and hip-hop, rock and hip-hop. There’s always a common denominator when it comes to music in general, but as far as drum and bass, and EDM kind of stuff, it’s all raw beats, with raw sounds. The only thing I have to do is add some lyrics to it.

I think the connection of it is the heavy bass, and just the melodies of it. Bass, and electronic (music), was being used in hip-hop back in the day. They’re not too far from each other.

AB: What was going on in your lives that inspired the content of the Handcuffs EP?

T: When he sent me these tracks, the title track was actually the first track he sent me, and I literally got those lyrics back to him in like ten minutes. He sent me a track, and I think he went for a drive, and I was already texting him like, “Yo, check your email.” One of the lines I said was, “I don’t want to handcuff you.” I’m like handcuffs, hmm, let’s call it handcuffs.

Some of those lyrics, what I do is I record a lot of mixtape freestyles, sometimes I post ’em up just to remember the lyrics, because I hate reading off of paper. Some of the stuff, “Computer Luv” was right off the top, as if I’m talking to some female. I made sure I recorded the vocals in the morning so my voice could be a little deeper.

AB: Rorschack, you were born and raised in Israel, but also lived in India, and spent a number of years exploring the music scenes of Italy, Spain, and Berlin. In what ways do you feel your travels can be heard in your music?

R: You know, I guess it’s in the little details. When you mix ingredients into a soup you don’t feel all the little ingredients separately, it becomes one soup. That’s what I hope. I hope that my soup doesn’t have any lumps.

AB: T.O.N.E.-z, you’ve been recording for over two decades, and were nominated for an Emmy for the theme song for the TV show Justified. Why is the specific musical experimentation that you’re doing with Handcuffs important to you right now?

AB: You mentioned you bumped heads a few times. What were you bumping heads over?

T: We’re both stubborn. It was never him worrying about my lyrics, or me complaining about his track being weak, or anything like that.

Technically, I guess I can say it was a little bit about the lyrics, because he was a little concerned, there were certain words I was using in there, and I would have to explain how the slang works in New York that he might not have been too familiar with, but we ended up getting on the same page.

Also, sometimes song structure, because I’m not that in love with the idea of just making it verse-chorus-verse-chorus. Sometimes I would want to shorten a verse, and things like that. Like I said, it’s a passion, and I was probably more hard-headed than he was. I’m real stubborn about things, so I was probably annoying the hell out of him.

At the same time, he’s very intelligent, his lyrics are very intellectual, and very pinpointed, too. I knew that, I recognized that, that’s why most of his stuff, I didn’t necessarily edit it so heavily. I tried to keep the initial momentum that he has in his lyrics when he spits them out. That’s what I was really fighting to keep in the music, and I think that’s what you hear.

AB: T.O.N.E.-z, you admitted to being stubborn when it comes to your music. What are some of the other ways you’re stubborn in life?

T: I’m stubborn about time. I will always be on time, and if not on time, I’m early. I’m very very particular about that.

I’m stubborn about recording. If I do a collaboration with another artist, and it takes them a week to do a verse, they’re pretty much going in the amateur box, unless they’re on tour.

It can be annoying sometimes, but (that said) I’m not a perfectionist. I’m not one of those people who feels like everything has to be perfect. I like to capture the moment.

I guess everything revolves around time. Time, and just the way people utilize it.

I do understand things. If I find out you were in a coma, I’m not gonna go, “Oh, you have to be in a coma NOW!?!” but when I see people taking others’ time for granted, things like that just annoy the hell out of me.

When I do a music video I’m like, let’s get this done, let’s knock it out. It shouldn’t take long. I don’t think anything takes long. I think you should be very focused on it, and not rush it, but I don’t think things should take that long. Maybe it’s just me. When you’ve been doing it as long as I have, it’s like why does it take you so long to do this? I know people that Detox their project. Dr. Dre sits around for 12 years trying to create an album. I’d have bopped Dre on the head. I’m that kind of guy.

AB: T.O.N.E.-z, in addition to this project, earlier this year you released a powerful single titled “Sins Of The Father.” Why did you decide now was the right time to speak up about what you experienced during your childhood?

T: Like I said, it’s a timing thing. I know a lot of people have been through (child abuse). It was one of those moments where I said now is the time to do it, and I just did it.

Before that I released “My Baby Girl,” which was a song about my ex-girlfriend having a miscarriage.

People are like, “While everybody else is turnin’ up, and poppin’ mollies, how come you’re not doing it?” Because I don’t pop mollies, basically. If I was poppin’ mollies I would probably make a song about.

I’m only going to do songs that are real.