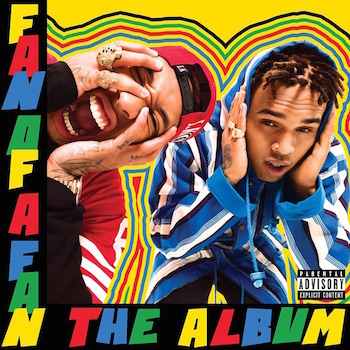 The majority of Hip Hop that reaches the radio and sells well to the masses, is either a rapper laying down three verses in between a catchy, sung hook; or an R&B/Pop singer sticking a popular rapper on the end of their club joint. It’s surprising there aren’t more full-length collaborative projects – perhaps Jay-Z and R. Kelly’s “Best of Both Worlds” put off potential combinations back in 2002, despite not being as bad as many thought.

Sure it was hugely disappointing at a time where Jay was arguably at the peak of his powers (falling in between “The Blueprint” and “The Black Album”) but both artists were well on their way to cementing their status as legends in their respective fields. Tyga is no Jay-Z, and having not released a critically acclaimed album (yet), I had low expectations going in to this record.

For the most part, Tyga does Tyga and Chris Brown continues his journey towards Bad Boy of R&B with songs such as the nasty “I Bet”, all about being certain that the listener’s lady will cheat with them for money and television exposure. It’s nothing we’ve not heard before, but the bluntness of Chris Brown admitting to leaving condoms on “bitches'” beds so their partner can find them, or guest feature 50 Cent explaining how he treats women like cum recepticles is a bit much even for the most experienced rap fan. Eminem and Dr. Dre are both referenced on “D.G.I.F.U.”, which features Pusha T delivering his version of “Forgot About Dre”. It’s a memorable moment, not just because of its influences, but because it’s the only track that isn’t infatuated with beef curtains.

Chris Brown actually impressed me with his rapping on “Fan of a Fan” and once you’ve heard the album you’ll remember it as a Chris Brown project more than a Tyga one. However, the content is very limited, with every track talking about getting, having or being balls-deep in pussy. It made me realize just how powerful the word ‘pussy’ is when creating sexualized music – if they had used ‘vagina’, ‘cunt’ or ‘hairy axe wound’ then 90% of the record would fail to work.

This is where Chris Brown excels; despite being easy to hate, self-centered and single-minded, Chris is brilliant at crafting music the equivalent of the very pussy he is hitting – infectious, yet hard to turn down. Songs like “She Goin’ Up”, “Lights Out” and the lead-single “Ayo” are all worth risking your reputation over. However, it’s further proof that Tyga has limited appeal when he isn’t rapping with somebody else.