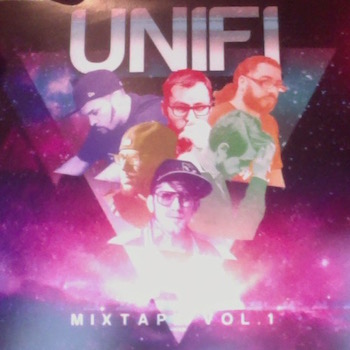 It took a minute for me to realize why the names Dana Coppafeel and Uni-Fi Records felt familiar, but when you’ve been writing about rap for 25 years almosteverything feels familiar to a certain degree. Finally I gave in and Google searched our own archive, and came acrossPatrick Taylor’s review of KingHellBastard from 2010. Different artist, but the label is the same, and Coppafeel was one of the featured guest emcees.

So first and foremost, thank you to Milwaukee’s Uni-Fi Records. It’s good to be on your mailing list especially for a mixtape, which so few people release a physical copy of these days, but the photo in our review is the actual CD I got in the mail. Secondly it seems that Coppafeel has gotten a bit of an upgrade from “guest artist.” It’s not strictly his album, it’s a mixtape after all, but the album’s description says that it’s “hosted by Dana Coppafeel and SPEAK Easy.” That lets you know these are the two artists that the Brew City imprint is currently pushing to the forefront.

Speaking (ha) of guest stars, Uni-Fi has aggregated respect to the degree that they are able to pull some pretty big names for cameos on the mixtape. I was doing my casual first listen just to get an overview of the album and suddenly the voice of Action Bronson jumped out at me. I hit pause, then restarted the song, and sure enough “Mr. Wonderful” himself is rapping on the “Hot Shots (Remix).” Bronson’s cameo here is classic AB: “She throw the drug in her butt/she hasn’t sh#% for days/she chill with dykes from state right where the Mystic play/You got a nice white d#%k, that’s what the sister say (thank you).”

He’s not the only cameo on the song, as Houston rapper (and MTV reality star) Riff Raff drops a verse. Remixes are a frequent feature of the mixtape in their own right. “This Is Us (Remix)” features a Keyzo Jasper and Ju Prime Trap track that sounds more Dirty South than Cream City, complete with the rising synths and the cocked guns. The Montana Macks laced “Juke Off (Remix)” features Chris Crack and Dana Coppafeel, and also has an element of Southern mellowness. The most unique remix has to be “One of These Kids.” The original version was a minimalistic production that was heavy on percussion, while the new version is much more melodic and electronic, with a guest verse by Prophetic.

There’s nearly an hour’s worth of material on “Mixtape Vol. 1” but the songs are smoothly blended from one to the next and the time flies by quickly. Some tracks still stand out amongst the mix though – the Biggie inspired “Rap Phenomenon” produced by Frank Dukes and featuring Mally definitely being one. “The Opposite of Wait” reminds me of The Jet Age of Tomorrow. Grappling references pop up throughout the album, and one song in particular is named after WWE’s former heavyweight champion, though don’t expect his theme song or any “Suplex City” references on “Brock Lesnar.” Overall I give a passing grade to “Uni-Fi Records Mixtape Vol. 1,” while marveling at the fact it took them four years to do one.