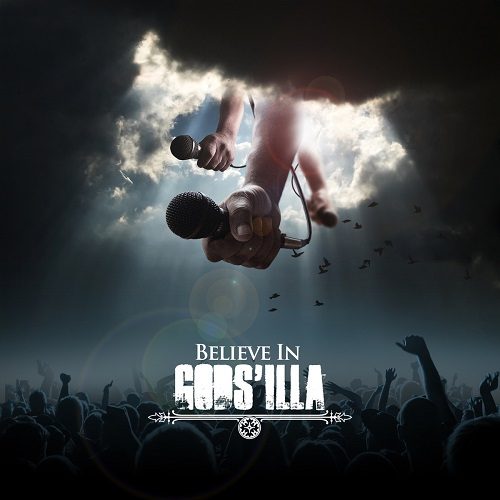 It’s not a kaiju big battle, but real-life brothers Acem, Truth & Powerful can team up like the Wei-Tang Brothers to do battle against the older Gods in hip-hop. That’s why they’re Gods’Illa. They’re the iller Gods, but they’re also coming in like radioactive mutant monsters, looking to wreck the competition in their way.

The expectations have been set higher than either “Cloverfield” or “Pacific Rim” though. 9th Wonder called then “the future” of hip-hop. Erykah Badu hosted their “CPR BlendTape.” They’ve already been featured in The Source, won a “breakout artist” competition hosted by MTV, and can proudly proclaim everyone from Monie Love to Pharoahe Monch as fans in their press release. If “Believe in Gods’Illa” is to succeed after that much hype, then the album really DOES need to be a monster. Literally. Nothing else would do.

“How you ‘posed to grow, when there’s drugs in your living room
Sex on your radio and murder on your TV show?
This mic amplifyin my wisdom or just my loose thoughts
My man droppin jewels as he’s puffin on a Newport
Zoned out, blastin the BlendTape, got intake
People askin why we ain’t on yet just offends me” – “Valleys & Peaks”

Well no need to be offended brothers, because the Gods are indeed ill on “ForestReal,” the lead song and video to promote “Believe in Gods’Illa.” Joe.D provides the smooth musical backdrop, Langston from Chop N Shoot Films handles the work behind the lens, and the trio of emcees take over from there.

The Gods get more endorsements on the over one hour long album in terms of guest appearances. Diamond District’s Uptown XO shows up “Who We Are.” Thaione Davis comes “Out the Darkness” into the light. Laz (among many others) from Clear Soul Forces shines on “Finish Your Plate.” It’s not about who the brothers can call on when they need a helping hand though, because they’re not about making the same old cliche big album with big guests and producers. In fact they’ll outright tell you that “Rap Sh*t Boring” and that they want to do something better.

“Knowledge always Reigns Supreme, just livin off mathematics
They think that we dealin with acrobatics
since we flipped on niggaz
with a total disregard for any static
Hip-hop turned aristocratic
We still in the trenches, representin for people that never had it
Success so close that you could grab it
Learnin from yesterday, delete the repeatin of those habits”

That’s what makes these Gods iller – they live up to the high praise of their peers with a carefully crafted musical and lyrical album that has something to say. They “Make It Work” with a “Straight Face” and never BS the listener with a bunch of unnecessary bragging about their status. They’re still struggling and hustling to make it to the next level, and that frustration with the odds against success come across on songs like “So Cold (You Make Me).” Despite that the Gods’Illa trio don’t seem unnecessarily bitter – more like a quality dark chocolate that’s better because it’s a LITTLE bitter. This is a refined hip-hop treat.