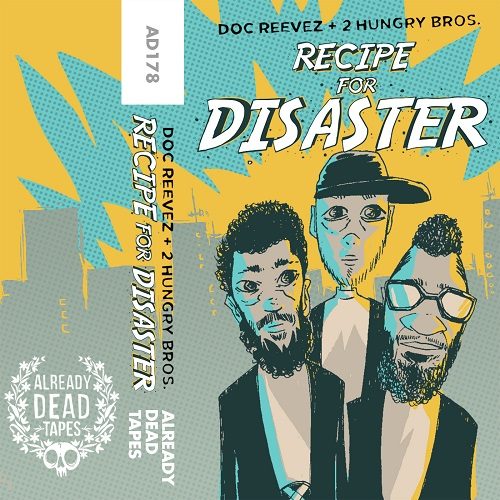 From my perspective it seems as though the 2 Hungry Bros. live just to put previously unknown emcees on a larger stage thanks to their well crafted beats. Enter New Jersey rapper Doc Reevez, who as coincidence happens stumbled across one of their tapes in a thrift store, instantly recognizing their production talents but not being able to make heads or tails of the handwritten insert to figure out WHO they were. A friend who recognized their beats intervened, introductions were made, and now Doc finds himself in the enviable position of having an entire album be laced by the Bros. “Recipe for Disaster” is the fruits of their collective labor.

The press release accompanying this album focuses on “Frun Gru” as the lead single, so I’m going to give it that level of focus as well to open the review. “These crabs acting like girls get dropkicked/You don’t want to get suplexed on these street/have you crying while the blood ooze, checking your teeth.” It’s a very pugilistic song that seems to borrow heavily from the worlds of pro wrestling & MMA, and also features cameo appearances from K Gaines and Reef the Lost Cauze. It’s a fun track on the whole but one thing strikes me right away – Doc Reevez seems to be going to extra lengths to clearly enunciate everything in his flow. “Ac-TING” as opposed to “actin'” and “check-ING” as opposed to “checkin’.” It’s not that there’s anything wrong with an emcee being purposefully articulate, but it comes across a little forced in the actual delivery.

With nearly an hour of music in total, “Recipe for Disaster” accidentally reflects the album’s title, containing a lot of elements that are enjoyable on their own and a few that almost ruin what the chefs are trying to bake. I know how talented the Bros. are, so tracks like “Soul Collector” don’t feel like their work. It sounds and feels like a knockoff Wu-Tang Clan track, complete with muddy vocals, as many Wu imitators do who try to capture RZA’s intentionally “dirty” style in the early 1990’s without successfully recreating the spirit of creativity that went into it. It’s only more jarring when hearing how much cleaner “The Wrath” is immediately after.

If you read the tags that Deep and Ben Boogz put on the album via Bandcamp the album is described as “eclectic” and “experimental,” and I would have preferred more of the former and less of the latter. When they stick to straight up boom bap in an eclectic variety of styles the results are pleasing, such as the hard hitting “Stimuli” (not featuring Sha Stimuli – oh well), the funky funk keys of “Charred Beef” and a GOOD Wu-inspired track in “No Resemblence.” On this track Doc morphs into a New Jersey version of Madchild and describes himself as a “warrior of ancient origin” and captures the right mixture of martial arts spirituality and slightly psychotic antagonist.

The problem with “Recipe for Disaster” is probably the high expectations I have of the 2 Hungry Bros. going in more than any of the elements by themselves. Still it’s a shame because I know their worth and songs like “The Movement” don’t feel polished, while songs like “Heavens Way” seem overly reliant on breaks that would sound good mixed with notes that don’t for inexplicable reasons. It reminds me of Gang Starr’s “ALONGWAYTOGO,” a song I’ve always considered one of DJ Premier’s rare misses, because it has an irritating high pitched noise that runs all through the cut except for his expertly scratched Q-Tip breaks between verses. If it weren’t for that one noise, the song would be a gem. Somehow the 2 Hungry Bros. have made the same mistake on “Recipe for Disaster” and left a lot of songs one or two elements away from greatness, leaving Doc struggling to gain an identity as his vocals get drowned in the mix. I’m surprised they let “Recipe for Disaster” come out this way and calling it “experimental” doesn’t make up for the fact the experiment didn’t entirely succeed. They can and will do better than this in the future.