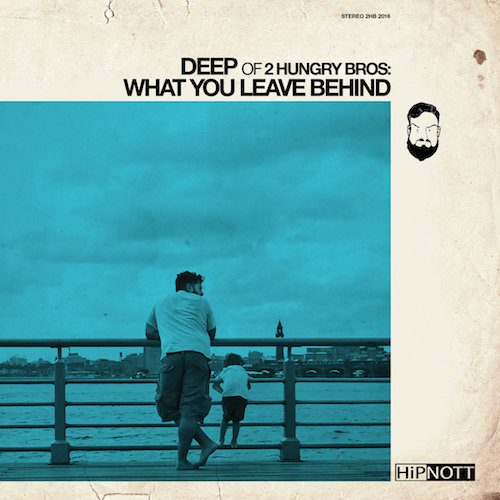 This review happened as accidentally as they come. I received a notification in e-mail that Deep (of 2 Hungry Bros. fame) has a new instrumental album called “Bushwick Beatfeed,” and I assumed the link was a digital copy of the album to review or at the very least a stream of said same. You know what they say about assumptions making you an ass though. I sat down fully intending to write the review and found there was only one playable track — what I thought was a new album was a PRE-ORDER for a new album. Whoops!!

Since I had already committed to review a Deep instrumental album though, I went digging through their archives and realized I had never written about “What You Leave Behind.” That’s a telling title for a middle aged hip-hop head who is starting to feel ever so slightly world weary. There are some tragedies of the culture that are unavoidable and can’t be changed, like Biggie and 2Pac being gunned down, but you never expect to outlive childhood heroes like Heavy D and Phife Dawg who are brought down for medical reasons. It seemed like they should be around for decades more to come and if it was up to me they would be. When you think about “what you left behind” as a rap fan it gets pretty heavy. The irony that Heavy D’s friends Pete Rock & C.L. Smooth first put this in perspective for me with their tribute to his backup dancer Trouble T-Roy on “They Reminisce Over You” isn’t lost on me.

Will they reminisce over me? Hard to say. Friends will try to convince me now and then that I’ve made a difference in this world, but by the very fact they’re friends you have to assume they’re not objective. Personally I tend to think of myself as lacking significance compared to the people I write about such as Deep, and while he’s dwelling in his own “Blue Funk” he took the time to let it bubble up musically to the surface on this instrumental album. Sometimes I’ll sit here and tell you that an album full of great tracks deserves an emcee to flow over the dopeness, but I’m not going to do that here. I’d rather hear the claves and snare hits of “Lower East Psyche” exactly as they are — unmarred and undisturbed. It just feels right.

There’s definitely a mood to “What You Leave Behind” but I wouldn’t say it’s as melancholy as mine writing it up. In fact some of it feels quite joyful and silly such as “Pumpkin Beer.” Between you, me and whatever cyberspace repository this review ultimately ends up in, I can’t stand pumpkin beer. I like pumpkin spice in just about everything, but beer is the absolute exception, and I like weird flavors in beer — chocolate, citrus, even hot pepper. Not pumpkin though! I can deal with Deep’s track though – it’s a good audible flavor.

For an all-instrumental album there are some suprisingly long donuts you can sink your teeth into here — this Hungry Bros. wants to keep you well feed. One of my favorite extended tracks is “Gouverneur Gardens.” It walks that polite line between being dope and being repetitive with just enough shifts in the elements to stay fascinating as you bop your head, and the breakdowns do make me picture what a nimble emcee would do to segue. In my head it’s like Madlib handing a track to Freddie Gibbs and saying, “Now you figure out what to rap on it. I dare you.” I bet that Your Old Droog could flip this though.

On the whole though I stand by my assertion that “What You Leave Behind” doesn’t need rappers even though I’m sure they’d line up to buy beats like “Wonder World” and “The Great Food Nap.” Deep manages to touch all different kind of flavors on this beat tape in digital form. The latter track reminds me of Alchemist, the former has a ?uestlove meets 9th Wonder vibe, and both sound perfectly natural for Deep. As he wanders through his own memories and leaves behind (in his own words) “a legacy for his son and all lovers of hip-hop” it takes curious and entrancing turns in your mind. As “East River Sickness” says the album makes you want to “open up your ears” and figure out where Deep is coming from — and he never disappoints.

Deep :: What You Leave Behind
8Overall Score
Music8