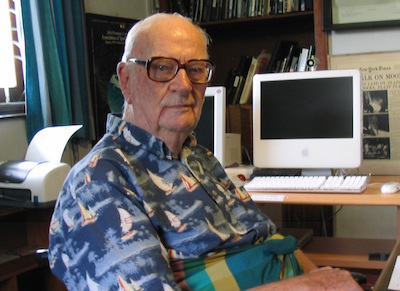 Colombo, Sri Lanka, 3/28/05 Sir Arthur C. Clarke at his home in Sri Lanka. A visionary who predicted artificial intelligence and communications satellites that orbit the earth in fixed positions, Clarke characterizes the slow rebuilding process in the tsunami zone as "survival of the fittest." He enjoys listening to a media file of the wind of Titan, contemplates a future with "more people living off earth than on," who travel the "future homes of mankind" via space elevators. "Good wishes" he said this week, "to aspiring atronauts and cosmonauts" who will "go into space and look at the home planet." photo by Amy Marash

I probably don’t need to out myself as a sci-fi nerd any more on this website than I already have, but if you don’t recognize the literary giant to my right, that’s Sir Arthur C. Clarke. Much like the film itself, I experienced “2001: A Space Odyssey” in print +after+ the movie was released worldwide. Of course I’m too young to have been alive when either was first published – the movie came out in 1968 and the novelization shortly thereafter. Film directing legend Stanley Kubrick helped Clarke draft the screenplay, but the novel and subsequent literary sequels are credited to Clarke. Several have yet to be adapted by Hollywood.

I tell you all of that simply to tell you this – when I was growing up two years in my life felt like milestones. I was alive for 1984 and I was alive for 2001 and both were times my childhood viewed as far away dreams. Many of the sci-fi concepts from both never happened, but some did. Global surveillance is a (sad) reality, but real time video calling is a (happy) reality too. Each one showed me what the future could be, for better or worse. By 2001 I was ready for hip-hop to do the same for me, having already been a part of my life for the last two decades. As it turned out hip-hop in 2001 had a fresh futuristic sound too – a brand new millennium flow – so fresh and so clean. Crazy instrumentals and crazy artists ruled the year. HOLLAHHHHH.