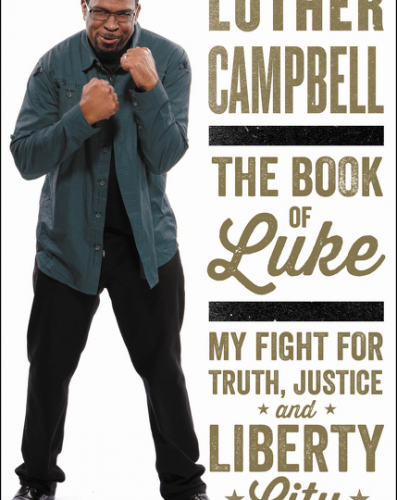 Luther Campbell :: The Book of Luke

Whether you know him as Luke Skyywalker, Uncle Luke, or Luther Campbell, you know him as one of hip-hop’s most fascinating individuals. From the tongue in cheek sex raps of 2 Live Crew, to the high profile trials involving first amendment rights, Luke has routinely found himself at the forefront of controversy. What many don’t know is that he’s also continually been at the forefront of helping his community. His recently released autobiography, ‘The Book of Luke: My Fight For Truth, Justice, and Liberty City,’ chronicles both his times in hip-hop, and his attempts to bolster his community.

Here are eight things you need to know about ‘The Book of Luke.’

1. Luke deserves pioneer status, and he’s not afraid to say it

Luke, unfairly, is often left out of hip-hop history books, despite being one of the people who brought the South to prominence in hip-hop. While reading ‘The Book of Luke,’ at times, you can tell he’s still a little angry at the lack of respect he gets from those who’ve chronicled the history of the genre. This is why he details everything from his DJ nights, to the building of Luke Records, to the highs and lows of 2 Live Crew, and goes in depth regarding the role he played in putting the South on the map. All of this is interesting, not just from a hip-hop historian’s standpoint, but if you’re an artist looking to build a label, it’s highly informative regarding the effort required to make that happen.

2. Luke REALLY cares about the kids, and his community

A lot of people view Luke as the guy who rapped a bunch of sexual songs, but in reality he’s also the guy who has, from day one, attempted to help the youth in his community. His passion for this is an overarching theme of the book.

3. He tells an untold story of Miami.

Most people’s image of Miami is one of models, high end drugs, and LeBron James making a brief stop to win a few championships. Luke breaks down the Miami unseen to outsiders; the racism, the segregation, and the issues that have been ever-present in the city since he was a child. There are some truly get wrenching stories involving how people have been treated, and it’s the kind of history that needs to be more widely known.

As an aside, I would have loved to have seen some of the information about Miami’s history sourced. I completely believe what Luke wrote, as I’ve spoken with hundreds of rappers, so I have no problem believing rappers. My concern is that anyone who doesn’t want to believe Luke’s stories will have an easy out simply by noting there are no footnotes to support what was written.

4. The sex stories are kept to a minimum

‘The Book of Luke’ isn’t 300 pages of sexcapades. Luke isn’t that guy anymore, and he’s clearly doing everything he can to distance himself from that part of his history. There are a few pages where he covers what 2 Live Crew groupies were like, but he is definitely no longer involved in that world, and isn’t all that interested in discussing it.

5. Luke had many MANY days in court

Reading about how many days of Luke’s life he’s spent in courtrooms, and preparing for court dates, gives readers a whole new level of respect for what he went through, and how his trials have helped a litany of others.

6. You’ll learn more about Miami youth football than you probably care to know

Luke has been spending his post-rapping years supporting, and running, youth football programs in Miami. The latter section of the book goes into great detail when it comes to this aspect of his life. His enthusiasm for the kids, and what he’s helping them accomplish both on, and off, the field, is genuine, and beautiful, although I didn’t need quite so many game recaps.

7. The grammar is horrific

Like many autobiographies, ‘The Book of Luke’ is written in a conversational style. I normally have no problem with this, but with such a focus on helping the youth, and educating the youth, I found it a bit odd that such poor grammar was allowed to be ever-present in the book. Additionally, as I noted earlier, Luke makes important points regarding Miami’s history of segregation, and treatment of minorities, and I’d hate to see those good points ignored due to the way in which they were voiced.

I’m a huge fan of sportswriter, and radio/TV host, Dan Le Batard, who is a Miami guy. That said, I was a bit surprised to see his name come up multiple times in the book. Sadly, there is no mention of Papi.