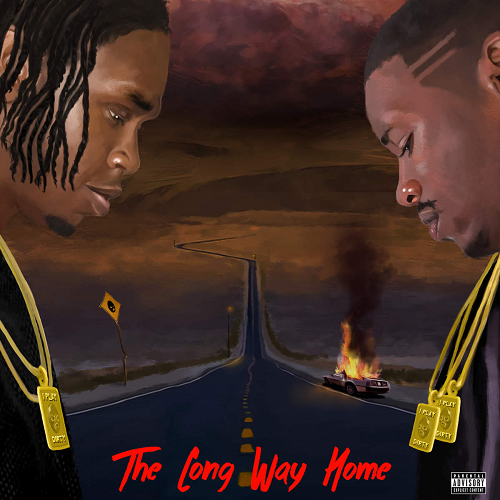 Krept and Konan are the hottest thing in UK Hip-Hop right now, despite having heavy links with the Grime scene. Grime is of course, a sub-genre of Hip-Hop, but the two scenes are markedly different. Thankfully Grime has progressed from the grainy camera phone videos that could be seen on Channel U (pre-YouTube outlet for amateur rappers) in the mid-2000s, whereby every track seemed to be a vicious snapshot of London gangland mentality, spilled forth upon a 140+ BPM instrumental. Hip-Hop on the other hand, has tended to be the more down to earth, working man’s music, particularly during the same time frame that Grime emerged from UK Garage’s ashes. Your Jehsts, Klashnekoffs, Tys, Task Forces et al were popular but remained markedly underground in their sound, being unique from the U.S. equivalent.

At the end of the 2000s however, High Focus became a leading label in UK Hip-Hop, combining the nostalgic production of 90s New York Hip-Hop with self-deprecating, often reckless (sometimes feckless) rhymes that connected with a new generation. The uniqueness of Leaf Dog and his crew The Four Owls has led to collaborations with everyone from Vinnie Paz to DJ Premier, but taps in to a certain section of Hip-Hop that Krept and Konan couldn’t be further from. These guys are closer to Sway or Giggs, who both transcended the Grime/Hip-Hop divide albeit through short-lived success – an all too common facet of being a UK rapper with buzz.

Both Krept and Konan were on Hot 97 recently, and mentioned how Rick Ross explicitly stated that he didn’t know “this type of music was coming out of the UK”. That’s because not since S.A.S. has there been an album so heavily directed by what’s popular in American Hip-Hop. The key difference here is that Krept and Konan don’t try to sound American themselves – they remain London through and through. It’s genuinely refreshing.

The single that’s currently tearing up the radio is a DJ Mustard production – “Freak of the Week” featuring Jeremih. As far as DJ Mustard productions go, it’s arguably his laziest (and I’m a fan of his minimalism) – it’s Beenie Man’s “Who Am I” updated for a new generation, something Beenie has acknowledged by appearing on the remix. Lines like “Showing off your skin, ah wanna see more” (a Simpsons reference) and “Have you ever ate McDonald’s on a G4?” (eating cheap fast-food on a private jet) are decidedly American yet feel typically British and lend some character to what is a largely derivative club anthem about bagging a chick. This careful bridging of two cultures highlights how Krept and Konan can’t be labelled sell-outs, even if purists would insist that they are making accessible music for a wider audience. There’s wordplay all over this project, some of it remarkably well hidden.

Sex is a prominent theme throughout, overshadowing the back stories of Krept and Konan. They don’t claim to be tough guys, despite one of them having done a stretch in prison which is either a missed opportunity, or an artistic decision. The main issue I have with “The Long Way Home” is the inconsistent flow of the album, as it jumps between ignorant club bangers you’d play whilst pre-drinking, and serious, introspective numbers that feature my parents’ favorite singers Emeli Sande and Ed Sheeran. There is the sense that they are trying to please as many fanbases as possible, and it does beg the question as to what surprises are in store on their sophomore release, as only names such as Jay-Z, Drake, Rihanna or Beyonce are going to feel like progression to new listeners.

“The Long Way Home” has its best moments when it retains what made them so popular on their mixtape “Young Kingz” – barebones production and bluntly delivered rhymes. Just as it feels like the American references are overdone, they’ll throw something in for British fans. An example of this is “F.W.T.S.”:

[Konan]
“I crashed an Astra for banter
I treat whips like Nascar
Now restaurants wanna give me black cards
Cause a brudda blowing up, allahu akbar
When it’s time for the nookie
Tell her I don’t like when it’s bushy
Like the old guy in a hoodie
I fuck her right in the pussy”

Just in these 8 bars alone, Konan effectively translates “I crashed an Astra for banter”, with “I treat whips like Nascar” being the same thing, just that a different audience will understand it. Of course, doing things for banter is a common phrase used by youngsters in the UK, as an excuse for anything. The “old guy in a hoodie” is a reference to the viral video of a man hijacking a televised news report by shouting “Fuck her right in the pussy”, which has also become a catchphrase used in everyday conversation in the UK (or maybe it’s just the type of people I associate with). The nerve of dropping “Allahu akbar” in a terrorism context too, is brave. There are gems like these scattered throughout “The Long Way Home”, it’s whether you can tolerate the commercial sound tying these tracks together.

YG guests on “Last Night”, an A$AP Rocky style, “let’s deepen the voice on the hook” type track which overshadows the underwhelming verses. Wiz Khalifa’s presence on “Do It For The Gang” proves more satisfying, but is similarly sex-driven. “Certified”, which features everybody’s favorite fictional coke baron, Rick Ross, isn’t as strong musically, but at least retains the overblown humor Krept and Konan made a name from, even if Rozay plays it straight.

Citing influences as Wiley and Dizzee Rascal, both from Grime pioneers Roll Deep Crew, highlights how influential those guys were ten years ago, but also how memorable their work was. Only time will tell how “The Long Way Home” fares, and while it’s not as groundbreaking or cohesive as key UK Hip-Hop releases by a Dizzee Rascal or a Klashnekoff, the fact that nobody has done an American album with British sentiments this well is shocking, and hopefully it acts as a platform to take British Hip-Hop to the next level. The longevity of their buzz will inevitably rely on whether the big names who have appeared on “The Long Way Home” are willing to have Krept and Konan on their projects. Let’s hope they do, as Krept and Konan have shown there is a place for British emcees in the pre-dominantly American, Hip-Hop charts.