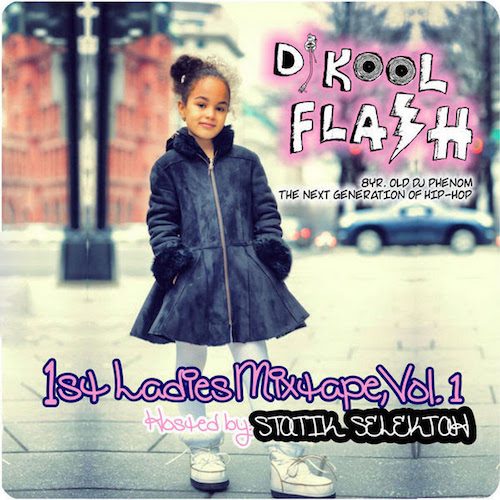 Several months ago my definition of the term “mixtape” (as it pertains to hip-hop) was challenged by a colleague for being limited and restricted to a certain time period. After brief consideration, I realized that he was correct. I had written that mixtapes would have to lack focus and vision to qualify as such, completely and inexplicably not bearing in mind that I actually own and have created mixtapes that contain both coherency and a concept. The idea can be anything that comes to the artist’s mind: Mixtapes with storytelling tracks; punchline rappers; regional artists; exclusive tracks; beats that sample TV/movie themes, etc. DJ Kool Flash followed this idea and released her own mixtape with tracks from female emcees. Appropriately titled “1st Ladies Mixtape, Vol. 1”, it’s hosted and co-signed by Statik Selektah.

With the inclusion of nearly all female emcees (Talib Kweli is featured on “Stay” by Dynasty), some may accuse Kool Flash of having bias in favor of her own. Some may go even further than that and knock her for her age. She’s a self-described 8-year-old b-girl, but her conception for this mixtape and her age only add to her ability to make noise as a budding young artist. Her youth and her proficiency as a turntablist are enough to prevent a listener from ignoring her offerings and potential.

Utilizing the under-utilized and oft-marginalized minority that are female emcees, each song is tied together thematically by themes of social commentary and female empowerment. The songs that Kool Flash seamlessly blends on the one & two are from female heavy hitters known across the underground/mainstream and old school/new school gamuts. From MC Lyte to Lauryn Hill to Rapsody, Kool Flash makes use of skilled female emcees in the same way that Marvel Studios often utilizes accomplished actors for their super-hero films. Her understanding of sound and melody allows her to blend and transition into one song after the next with being out-of-place or left-field.

“Let it Fall” by Lin Que (ft. MC Lyte); “Repurcussions” by Lauryn Hill; “Pump Ya Breaks” by Rapsody; and “Hookless” by Narubi Selah are among selections and each embody the theme. But more so than any of the others, it’s the inclusion of Queen Latifah’s “U.N.I.T.Y” that completes the mixtape. Having “Ladies First” would’ve been too obvious a choice to be a selection, but the former Queen Latifah song carries stronger weight. It’s also the one track where Kool Flash showcases her scratching abilities.

Given her youth, knowledge about hip-hop, and skills as a DJ, Kool Flash is part of a newer generation of hip-hop artists who’ve been schooled early on about the culture without having to accommodate the interference that comes from corporate interpretations of it. She’s been co-signed by Statik Selektah as well as by members from both the Duck Down and Wu-Tang rosters. I’ve always held that some of hip-hop’s best producers started out as DJs. Should Kool Flash decide to take that route, I look forward to seeing her reach that potential. Though I think more tracks beyond the fourteen offered could’ve been added to “1st Ladies Mixtape, Vol. 1”, what we have here will suffice.