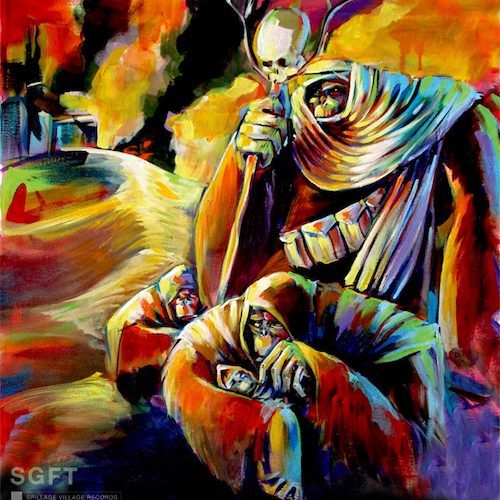 Over the past year, the city of Atlanta has risen to the top of the hip-hop game. Future is everywhere; Young Thug is now heralded as one of the most unique and inventive emcees to ever grace the mic, with a meandering flow reminiscent of the Chattahoochee (which sounds like a word Thugger might use in one of his tracks). Yet, just as the Chattahoochee does in Georgia, we see Future, Thugger and their contemporaries finding their way into the wealthy suburbs of the United States. In fact, the “promethazinic” aura of “Dirty Sprite 2” has even found its way into a Robitussin commercial, so now Future is even in medicine cabinets. Indubitably, the blunted and sporadic deliveries of Future and Thugger, respectively, have secured their place in Atlanta’s rich and diverse hip-hop history, which EarthGang, the centerpiece of the Spillage Village collective, hopes to add to.

EarthGang, comprised of emcees Johnny Venus and Doctur Dot, has been scratching at the surface since their 2011 releases “Mad Men” and “Good News”. Johnny Venus presents himself as the more mellowed out, rational voice of the group, whereas Dot describes himself as:

“What you get if Lauryn Hill slipped up and let Juvenile hit
And then they crazy asses let Angela Davis babysit
So raise them fists – quit complaining bitch!
If you mad, then change some s–t”

At times they can seem like they’re operating on two completely different emotional and spiritual planes, but as the album progresses it becomes clear that the two are totally in sync, dealing with issues of generational development, or lack thereof, and their stoned nightmares. On their 2013 effort, “Shallow Graves for Toys”, the two tortured spitters begin to show signs of frustration with their situation, a frustration unseen in hip-hop since Little Brother’s underground classic “The Minstrel Show”. “Minstrel” and “SGFT” differ in their frustrations though. Whereas in 2004 Little Brother had only expected their music to take off, perhaps satisfied with the other aspects of their lives, EarthGang still yearns for the most basic needs. The album’s introduction (“Fort Knox”) foreshadows what lies ahead for the listener, an album that is indeed, “HEAVY! HEAVY! HEAVY!” as DJ Fort Knox so delicately puts it.

You may not want to hear me out right now, but, EarthGang has created a new type of trap music; a music that is no way derivative of what we know about the omnipotent trap of 2015. EarthGang has created an album that elicits feelings of being “trapped”. Yes, a common trope of hip-hop is this feeling of being trapped within a trying environment, which causes rappers to rhyme about what they do to escape said trap. Yet, EarthGang, products of previously mentioned frustration, can only seem to rap about how “stuck” they are. In a style reminiscent of the Wu-Tang Clan’s resident academic, GZA, EarthGang aptly make the listener feel suffocated, while flowing over aurally pleasing beats. Admittedly, I have no personal experience of living in low-income housing, “the projects” or in anything remotely close to it. But EarthGang’s ability to make a fairly sheltered person feel these constricting effects of their circumstance is remarkable. The most poignant image, which is no doubt up for debate, comes in “Fire Kicking Tree Limbs” when Johnny Venus reminds us of the child in low-income neighborhoods “selling fruit snacks in December” just to make some money to eat. The number of times I have been walking around urban areas and seen Welch’s Fruit Snacks for sale to support a local basketball team or youth group is incredible. EG has a distinct ability to touch upon universal particulars, a true lyrical weapon that adds to their already impressive arsenal.

So much of what contributes to the “trapped”-ness of their music is the constant reference to those who came before Dot and Venus.

“But anyways, this for my pops
In that boat, Levi’s t-shirt chilling on the couch
Shake his head at the news and tell me what life’s about
Long as liquor’s in his juice the knowledge keeps coming out
Prolly cause he done seen the s–t that I’m worried ’bout
Prolly cause he done dreamed the s–t that I’m dreaming now, so
You f–k niggas keep my name out ya mouth
And make room for my dick when the beat drop”

Throughout “SGFT” there is this idea of repetition and how what has occurred in the past so greatly affects the emcees we see before us. The most tangible allusion to EarthGang’s past, while the track itself mainly serves as a love(making) song, comes in the form of “Bill Campbell’s Soup”. Bill Campbell was a controversial, African-American Atlanta mayor, who served in office from 1994 to 2004. He launched the Atlanta Empowerment Zone initiative, which was a $250 million dollar effort to revitalize low-income areas of Atlanta, which was a massive failure due to classically corrupt politics that Campbell himself was unfortunately involved in. Perhaps as a reflection on Bill Campbell’s time in office, or simply the quality of life for blacks in America, Doctur Dot spits:

“SGFT” is full of these extremely dense, yet concise, bars that so accurately describe the state of African-Americans in the SWATS [Southwest Atlanta]. Dot succinctly and artfully describes the phenomenon of black-on-black crime, thus making a touchy subject more accessible and impactful. Furthermore, on “Apophis (Welcome to America)”, Dot and Venus describe the way in which America has attempted to pacify and whitewash black Americans’ historical experience.

Many hip-hop fans, at times myself included, become weary when they hear lines like the above. Politicized rap music is often seen as the wacko section of hip-hop, filled with sh–ty snares and esoteric beliefs/references. But, EarthGang does not let their historical interests get in the way of creating pure Southern hip-hop.

The last point I’d like to make about this album is how vulnerable, thus incredible, it is. So much of hip-hop, now and in the past, has been entrenched in the idea of “the truth”. Since hip-hop’s conception, we have seen emcees beating their chests talking about how “real” they are and how nobody else is as real as them. Does EarthGang do the same thing? Absolutely. Yet, throughout the project, Scarface-esque lines substantiate their claims of authenticity, such as the one found in “Sweet Haste”:

Six words and Dot has described how defeated he feels, a testament to his delivery and cogency as a lyricist. In that very same song, Dot describes his violent interaction with God:

“Close your eyes God I know you wouldn’t approve
Felt the breeze when He replied like, ‘Damn c’mon dude
You know you better than the moves that you put yourself through
I made you brilliant, I made you talented and handsome
And you got the f–kin’ nerve to destroy what I built?!
Nigga, you sick? Is that why you popped all them pills?
You know yo momma shed tears for the way that you live’
At this point in my life, my pride was kinda out of hand
So I hit the brakes, parked the whip and hopped the f–k out
Snatched God out the passenger like, ‘What you talkin’ bout’?
He punched me in the mouth, the blood is what you hearin’ now”

Whether or not this is Dot recounting his individual interactions with God or not, what a verse like this shows is an acute self-awareness, which leads to a more vulnerable and truthful emcee. The best art often comes from moments of vulnerability (think David Bowie’s “Blackstar”, Kanye West’s “Only One”, BJ the Chicago Kid’s “His Pain”), thus EarthGang’s success on this project should not come as a surprise.

“Shallow Graves for Toys” should be remembered as one of the greatest hip-hop releases in the 2010s. The album is extremely dense and has been stowed away in the catacombs of the Internet, only to be discovered by the lucky few that happen to stumble upon it. The production is extremely strong, and outside of the painfully overused Cortex sample (“Exactly”), the beats knock in so many different ways. Whether it’s the cacophonous horns on “Bitchxs Tumbl”, the minimalist soul of “Sweet Haste” or the traditional trap-beat on “Machete”, EarthGang’s music seamlessly flows through many facets of hip-hop, just as the city of Atlanta’s collective sound does.